It was fun to chair a meeting after what seems like a year since Frank was on a trip. Great to have our own member to give the August BAWA meeting presentation - thank you Harold Patterson!

I had just returned from a nice woodworking experience blended into a trip. I went East to visit my mother in NJ and decided to take a class at Arrowmont School of Arts and Crafts located in Gatlinburg, Tennessee as long as I had flown cross country. Terry O'donnell from our club was at Arrowmont the month before and took a kitchen utensil carving class. I took a turning class with Beth Ireland, who mostly teaches at Center for Furniture Craftsmanship lately, and her focus was two fold: spindle turning and creativity. Beth postulates that most young people somewhere around the age of 12 let go of their creativity in the interest of conforming with the class and if they work on restarting it sometimes have to go back to where they were when they shut off the creativity and bring it up to adult creative status.

Arrowmont had us register on Sunday afternoon, have dinner together and then like an hour Introduction to Arrowmont and introduce the eight instructors for the eight classes running simultaneously that week (Fenland and Center for Furniture Craftsmanship run both one and two week classes, Arrowmont does just one week classes) covering clay, painting, regular woodworking (they made a side table in the woodshop - I was in the Turning shop with at least a dozen wood lathes, but fortunate for me only 4 students that week in class) and quilt making. Then we went to our studios to meet the instructors and get started. I was expecting to be given a syllabus and hear a brief lecture on what we would cover during the week. But, NO we were given a piece of wood and after a very brief basic demonstration by Beth we were to start turning! By 9pm we had all turned two pieces of wood spindle style.

The Next day the 'thing' we turned the night before was to become a handle for a lathe tool! We were then shown wood-burning (yes pyrography) and suggested we think of turning as just one method to shape wood. Woodburning, ornamentation, carving, and painting were some other methods to change the outer surface or shape of the object. So we burned some patterns or shapes onto our handle and then shown how to mix Milk Paint. This we applied over the pyrographic symbols we had burned into the handle. When the milk paint dried (minutes really) we sanded it and then burnished it with 0000 steel wool and after that it has the appearance that there is wax over the paint! Had no idea I would be taught such ornamentation but enjoyed learning the techniques. We then put 1/4" Allen Wrenches into the handles and cut the angled portion off and ground a cutting edge on the grinder. Next day she had us CUT with the new tools we had just made (pretty cool!)

So I made two lathe tools (and turned with both of them) and a mallet. Then we made a project more art related. I turned what basically looks like a soda glass with bottom section which got soaked in Indigo Dye (natural of course) and a tubular piece of cherry drilled out to accept a pencil which looks like the straw of the drink. We had to select something from an art book which could be roughly made at least partly by turning.

I had never really done spindle turning since basic wood shop in 9th grade and turned many small sample items. Biggest discovery was that projects employing the lathe can be done in like an hour or hour and a half. My creativity was kicked back into gear and a couple days ago I found a used Powermatic lathe on Craigslist and decided to buy something quickly to make use of the training I had from class. A good experience and hopefully the seeds were planted for good experiences from another genre of woodworking. That was my Summer woodworking class this year!

John Blackmore urged members to complete entry forms online for the upcoming wood show at the end of October. In 2014 we had a participation rate of 26% of members. Our present show has a rate of only 2%. Members need to get projects into the show in order for it to be successful.

Steve Rosenblum asked for a show of hands as to whether members thought that the Classified ads should be continued on our website. The overwhelming majority felt that they were not useful so they will be discontinued in the near future.

Per Madsen then reported on the upcoming meeting schedule.

In September we will have a talk on marquetry by Arnie Champagne.

There will be no meeting in October because of the wood show.

The November meeting will be a review of the show from the show judges elaborating on their assessments of the work presented. December will bring the annual holiday potluck with a talk from Frank Ramsay on the history of BAWA.

In January we will hear from Ian Agrell about carving.

February we will learn about building harpsichords from Kevin Feher.

Per announced that he will be stepping down as program chair at the end of this year and urged someone to step forward to pick up the mantle.

Arnie than talked about what he would like to see in his demonstration next month. He wants each attendee to bring pieces of veneer cut from wood with interesting figure. The pieces should beat least 10" long and .093" thick. The pieces should be run through the thickness sander so that they are all the same. People should expect to exchange wood slices with each other and then go about cutting out and gluing up a marquetry design during the course of the evening. He asked people that have portable scroll saws to bring them in to share during the evening. A #2 skip tooth blade will be used and members should bring a pin vise or a Dremel to hold a #68 drill to make a starting hole for the blade. 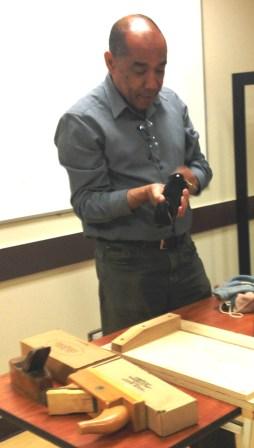 Jay then introduced Harold Patterson as the featured speaker.

Frank Taylor was ill so he could not present along with Harold. Harold then gave a short presentation about the Toy Workshops followed by a longer presentation on the use of handplanes in a hybrid mode in a shop with woodworking machines.

The Toy workshops began by making very simple toys like crickets and rudimentary cars and has now evolved to making realistic looking cars and trucks in addition to simpler toys including periscopes and whistles.

Our beneficiaries have been the Janet Pomeroy Center (disabled children) and the Ellen Crittenden Center (low income mothers) on Masonic and the Holy Homes Charity and School on Dolores in SF. For safety reasons the toys are mostly unfinished except for use of shellac at times. Frank and Harold are developing a new dump truck design that will be more sturdy and simpler to build.

Harold then went on to talk about the use and care of handplanes. He suggests that handtools have a prized place in a shop outfitted with woodworking machinery when you want to get dead nuts accuracy on a tenon width using a shoulder plane or getting a miter at exactly 45 degrees or squaring up the end of a board using a shooting board and a hand plane after having done the majority of the work using machines. One can also consider using a #5 plane to flatten a board wider that your jointer can handle. For this purpose Harold suggest using a cambered blade (8-10 inch radius). In this case the #5 is working more like a scrub plane. Harold maintains that as long as the plane blade is sharp the blade angle is not important. He likes to sharpen his blades at a 30-degree angle because the edge holds up well and does not require frequent re-sharpening. The exception to this is on a block plane where he prefers a 25-degree angle. Anther plane to have in your arsenal is a smoothing plane (#3 or 4) which is 7-9 inches long. It is also useful to have a 22" long jointer plane for flattening a board. For special uses a router plane is valuable for getting the bottom of a dado or groove to the exact depth that you want. A drawback of this plane is that that blade is hard to sharpen. If you have a project that only needs a very short piece of molding is often quicker to use a molding plane to shape it rather than a router. Beading planes in different sizes can also be useful for forming beads on furniture or molding. A card scraper is useful to get a final smooth surface and can eliminate the need for sanding. A scratch stock can be made easily from a scrap hacksaw blade but you need to obtain a holder to use it. Lie Nielsen offers a good design for sale. Spoke shaves are hard to use because they do not provide a good reference for the blade angle. If you are trying to smooth squirrelly grain, a plane with a toothed blade can be very useful. Once the surface is flat, the ridges can be removed with a smoothing plane. When using a smoothing plane the chip breaker should be within .005" of the edge of the blade or a tight mouth should be used to give shavings of .001-. 002" thick.

For info on old hand tools for sale Harold and Jay recommend: supertool.com 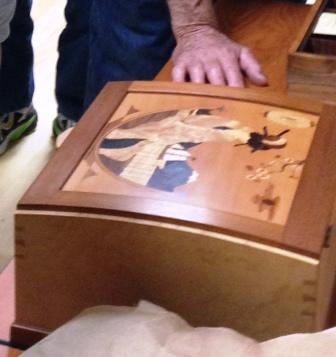 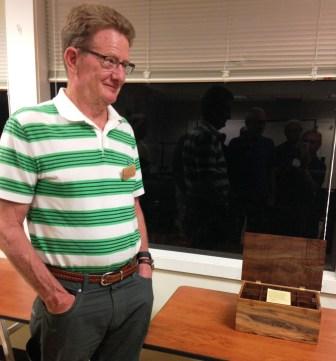 John Blackmore showed a willow jewelry box made from a tree that was cut down in his yard. 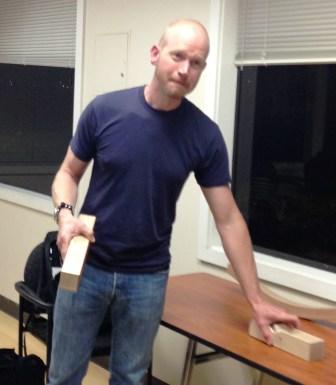 Chad Magiera showing the wood planes he made at the College of the Redwoods this summer.

Randall Schwartz showed a drawer and some photos of the dresser he built for his son based on an antique that he saw at the Fort Lauderdale Museum of Art. The exterior of the dresser had evenly spaced grooves cut around the front and sides. It was made of poplar and maple.


Because Stan Booker was not present, there was no door prize drawing and the meeting adjourned at 9 PM.