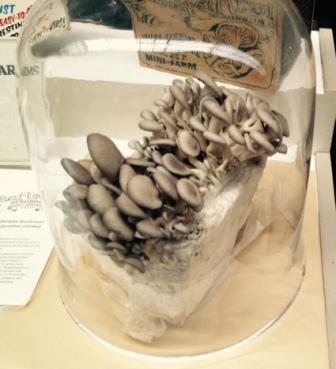 These are mushrooms on sale locally…and they are related to yet another new way to make or at least grow, furniture.

A few months ago I saw the article about a group in England who are trying to grow chairs by forcing the small trees to grow into ready to use chairs by means of forcing them to grow around plastic forms. The article said that that the first batch of chairs will be ready to harvest next year.

But now much closer to home there is an artist/furniture maker, Philip Ross, in San Francisco who is using fungi as the core of his chairs, etc.

Philip is a mycologist and he started his work by looking at the "bricks" of fungi?? used as a base for growing mushrooms (just visible in the picture above). The fungi blocks are treated with an epoxy to seal them. 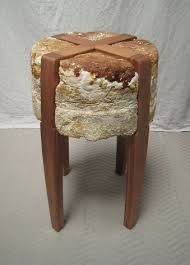 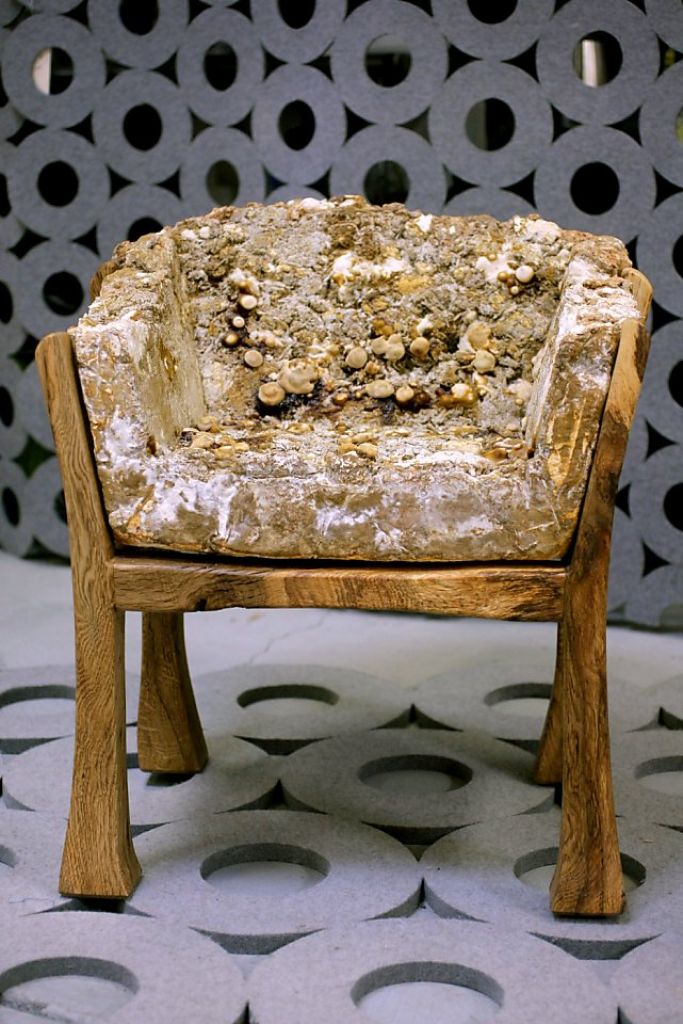 Some of his work is on display in the Workshop in San Francisco's Dogpatch area where he is the artist in residence.


In June we had a presentation by Alan Olsen, from the Educational Tall Ship program in Sausalito on the large wooden ship he and his team are building in Sausalito.

A few weeks later about 15 of us went for a tour around the ship. There was a lot to see. The tour led by Alan took about 2 hours. The endeavor is an amazing amount of work.

They are building the wooden ship to specifications based on the Matthew Turner (which was built in 1891) but as it is an educational ship and will sail with up to 38 young people on board it has to meet modern Coast Guard standards. There are steel partitions that will seal the ship into several waterproof compartments in case the hull is damaged. There are also bronze struts in the base of the ship to hold the hull together; these are instead of the original wood as in the original ship. There are going to be cabin areas with bunks for the visitors to sleep on (days of hammocks are long gone) There will be an area for laundry machines along with modern cookers and refrigerators. Even the bathrooms will be more modern than the originals.

The goal is to design the ship so that it will be good for over 100 years which is a lot longer than most wooden sailing boats lasted.

They have volunteers working on the ship 6 days per week and are always ready to welcome new people who want to help out. If you would like to volunteer just visit it the yard one day and ask for more details. The shipyard is open 6 days per week and open to anyone who wants to look around. 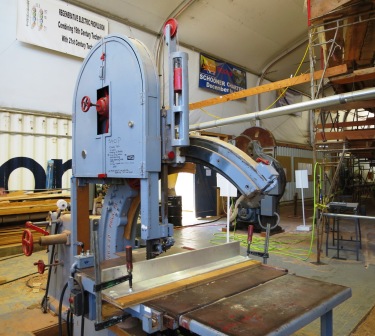 This 1938 compound angle bandsaw can tilt the blade = +/- 45 degrees while it is running . So the angle of cut can be varied every few inches to make the compound cuts need for the main beams. 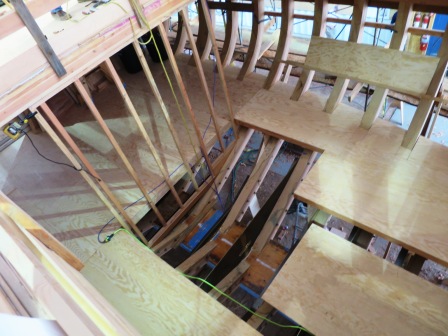 Below deck where the bunks and bathrooms, etc., will be. 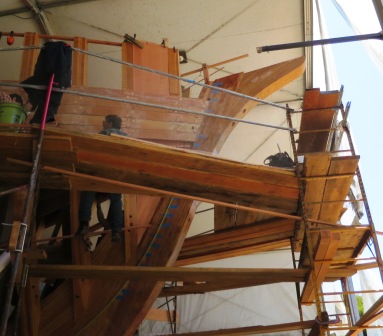 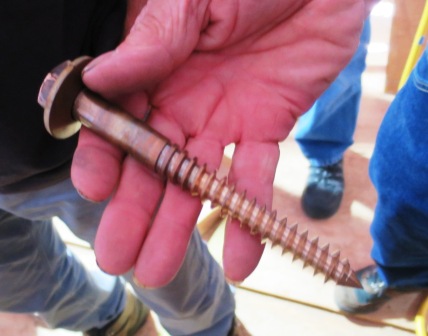 The screws being used are specially made from a bronze alloy for strength.

The keel has a 44 ton lead beam that was specially cast in 2 sections for the boat. This is for one of the design requirements that it should be able to tilt over to 100 degrees and still right it's self. 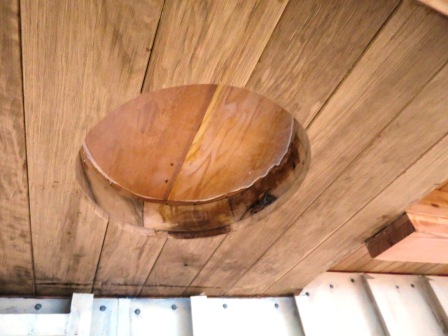 The neatly-cut round hole where the mast will eventually be. 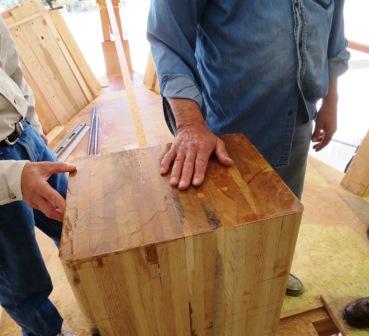 This is the heel pole which is the brace against which the bow sprit pushes. It is made of small crosssection oak strips epoxied together. 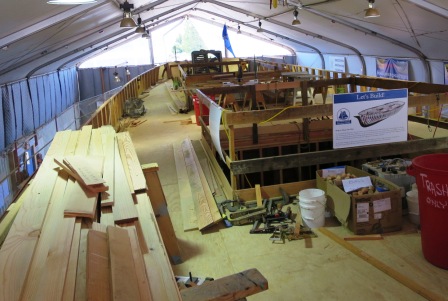 On deck with the construction tent overhead. 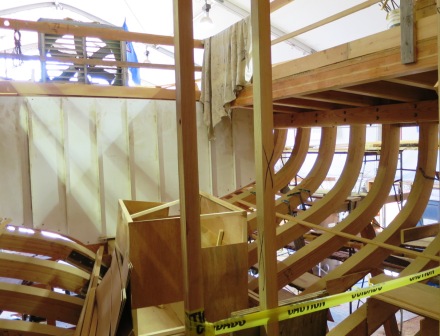 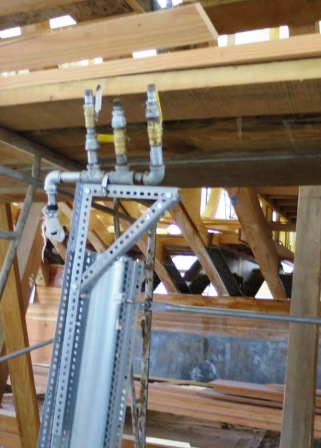 Closer inspection of the hull construction with the bronze cross ties.


On a separate note I was sorry to hear from a BAWA member about the closing of Southern Lumber in San Jose the other week. It all seemed to have happened very fast and it was closed before I knew about it. It had an amazing collection of beautiful lumber, very expensive, but when I need that special piece of Birds Eye Maple or something I would often go looking there. Usually ending up buying a little bit of some other exotic wood at the same time. It had been around for 110 years but when you own 3.4 acres of prime land near downtown San Jose there are much more valuable things you can do with it than use it for a lumber yard.

President Frank Ramsay called the meeting to order at 7:05 PM at the site of WoodenWindows in Oakland.

Per mentioned that our next meeting will have Dean Santner as a speaker and will take place in Foster City.

The meeting on October 17 will feature the 2x4 contest.

Frank mentioned that he is continuing to scan old newsletters and put them on the website.

Stan announced that the wood raffle is continuing with about half the amount raised before the red oak and maple board winners can be drawn. He also mentioned that drawing for the door prizes would be at the end of the meeting. 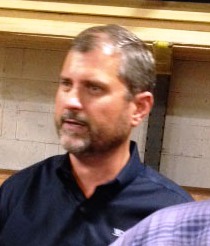 Per introduced our speaker, Mark Christiansen, the CEO of Wooden Windows. Wooden Windows makes custom wooden windows and doors for homes, businesses, and government entities. They specialize in historical restorations. The company started in 1980 by doing window and door installations, Then, in 2000 it began to do light manufacturing and in 2007 began doing large projects. Mark was in charge of engineering and production for his first 7 years with the company and introduced the CNC machinery to their manufacturing process. He is now the CEO. Chris Hendricks, the Director of Sales was also present during the presentation and offered some insights along the way. The company runs two shifts per day and is constrained in its operations by the mixed residential commercial neighborhood noise and traffic regulations.

In a project their work can span the range of restoring old windows and doors to making copies of existing doors and windows to match the historical units in existing buildings. The glazing can span the range from single pane glass to performance glass to high efficiency double pane glass depending on the project needs and customer requests. Particularly in historical window projects they tend to use performance glass, which is two panes of glass, held together by a glue interlayer. This is similar to auto glass and so has good sound deadening properties as well as shatter resistance.

If they are given a restoration project, they have the capability to remove old lead paint and install new glazing. Because of these efforts, restoration can cost twice as much as building a new copy. 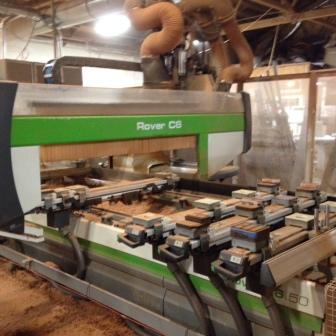 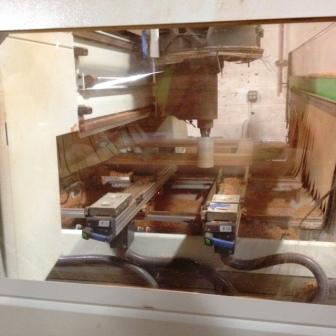 Their CNC equipment consists of 2 routers and one cut saw that have a precision of 1/250". They also have common woodshop equipment such as a 52" wide belt sander, a 24" planer, a Martin 16"jointer, drill press, a rip saw with automated return, band saw, etc.

Mark then described some of the projects that they have done:

Stuart Hall School for Boys, San Francisco-They built 105 new mahogany sashes and windows for window openings that were out of square so had to be customized on site. They use a Prodim Proliner measuring device to get accurate measurements. It uses contact measurements and GPS positioning to make accurate measurements in 3 dimensions.

Historic Old Admin Building, Fresno City College-Originally constructed in 1916. 746 windows were removed and shipped to Oakland where they were rehabbed. Over 120 doors were replicated and over 100 new windows were fabricated to match the older ones. They tend to use only African mahogany (called Kaya or Sapele) for all their projects even though that is not historically accurate because it tends to have straight grain and very little resin.. Honduran mahogany is typically a better material but recent deliveries had had many worm holes and so have been unacceptable.

Battery/ Pacific Social Club, San Francisco-This is a private club in an historic building. They had to figure out what the original windows had looked like since they had been replaced with aluminum ones in the 60's. They are 8 feet by 10 feet in size. 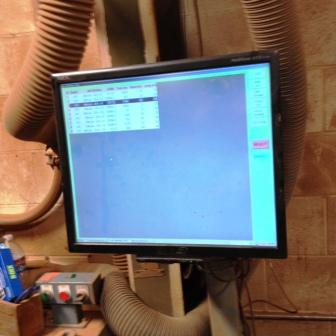 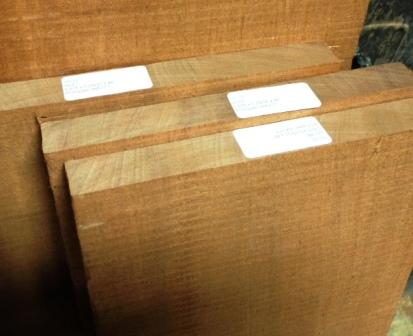 The talk ended with a shop tour so we could see the machinery in action. The automated cross cut saw is only used for 90 degree cuts and will optimize the cuts based on the lumber dimensions, a cut list, and any marks that the operator puts in to mark defects such as knots or pitch. The machine also prints labels for each part.

The two CNC routers are a Biesse C6.50, a 4-axis machine and a Biesse C9.50, a 5-axis machine, the difference being that the 5-axis machine has one more rotational motion. Both machines have tool carousels with 33 tools and 32 drills, which are exchanged under program control. We were able to watch as these machines performed the milling of a door lock mortise on full size door clamped horizontally on the bed. 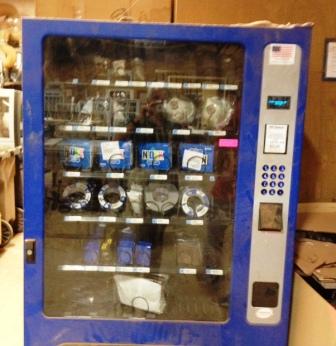 Vending machine for staff to get safty equipment. 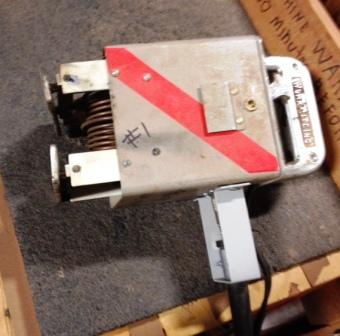 The shop also possesses a wide variety of presses and clamps for glue-ups and laminations. They have a 20 ton air actuated hydraulic press for veneering and a 52" wide belt sander which has 3 belts mounted in series. The first has 80 grit, the second 120 grit, and the last 180 grit so that the part comes out at a pre-determined dimension and sanded to 180 grit in one pass.

The meeting ended with the drawing for door prizes and adjourned at 8:50 PM