Slowly we are getting on to our web site all of the old BAWA Newsletters going back to 1987, when BAWA first started.

Before we had our newsletters on-line they were printed and mailed in the old-fashioned way which was expensive. Printing and postage were significant expenditures. These early newsletters do not exist as nice text files on a computer anywhere so they are being scanned so that can be put in the on-line archives. Our ex-President Bill Henzil is looking after this task.

Note: On a technical note: We have upgraded our website on-line storage by 1GB which (by the standards of the last century) is a tremendous amount of extra storage. Reason is the recent newsletters created for use on-line are fairly compact even with all the pictures included. The old newsletters that have to be scanned are 5MB+ per month due to the fact they are scanned - so modern technology does have some advantages.

The earliest newsletter on-line at the moment is January 1988. Peter Good and Steve Madden were the co-chairs. The meeting was held at Classical Constructs in San Francisco, where the owner, Rob Wood, was the host. The Newsletter also carried advertisements including the White Brothers Hardwood Lumber and Quality Saw Works (both since gone?); Van Arsdale ( survived until very recently) and MacBeath Hardwood (still with us in the same Oakland and San Francisco locations). There was also a useful listing of the different types of taxes woodworkers doing business in California may have needed to know about and the contact numbers for information.

Note: I think our newsletters carried advertising until we became a non-profit when we had to stop taking advertising.

The October 1989 Newsletter was devoted to a message from Newsletter Editor Norma Brooks, explaining that "BAWA is in a crisis situation as the active participation by members is not enough to keep the organization going in 1990" (2015 reminder: the December meeting is when we have a board meeting to elect the associations members and sign-up volunteers to help with the various tasks required to keep the organization going).

You can find the old newsletters by going to our website and looking under Publications at Past Newsletters. At the bottom of the page you will find a table of Archived Newsletters.

We would love to hear from you with any reminiscences you have about the old meetings.

Frank Ramsay gaveled the meeting to order at 7 pm. He announced that our scheduled speaker, Dean Santner of Navigator Systems, is not able to attend tonight because of a wild fire threat to his property. Instead, three BAWA members, John Blackmore, Bruce Powell and Claude Godcharles will share the speaker's platform.

Steven Nunes joined BAWA this evening. He is returning to woodworking. 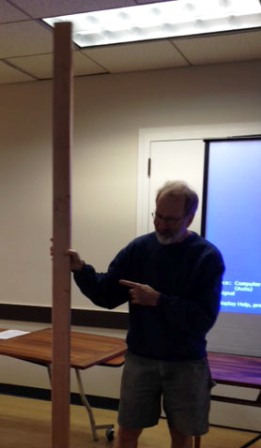 Jamie Buxton introduced the 2 x 4 contest to be held next month. He donated a Douglas Fir 2 x 4 from his secret stash for a lucky raffle winner tonight. He reminded us of the rigorous contest rules: 1. Use only one 2 x 4 board. The end.

December we have our annual potluck feast and Arnold Champagne will be the speaker.

Neal White announced that he is moving to South Carolina soon and is selling all of his tools.

Harold Patterson said that a Toy Workshop will be held this Saturday, Sept 19 at Jamie Buxton's shop.

Claude Godcharles has been cleaning up his shop and is donating to BAWA two stacks of sycamore board drawer fronts. Proceeds will go to the club.

John BlackmoreDescribing his suite of furniture for his home office.

In October 2014, John had presented his madrone Stand Up Desk in the BAWA Wood Show. It won the People's Choice Award for the show. It was the first piece in the office suite of furniture. He has since completed a desk, a corner table and an end table. These latest pieces are made with vacuum veneered madrone tops mounted on bases made of cherry. The photograph shows the dramatic book ended top of the side table and the variety of colors in the 12 inch wide veneers.v 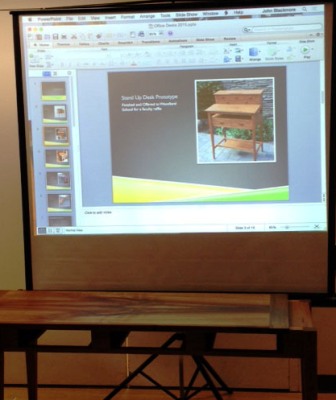 The prototype built for the stand up desk, shown at a prior BAWA meeting had been constructed from Douglas fir and white pine. After completing the piece, John decided to finish it by adding a lower shelf area, staining it with a cherry finish, then applying wipe-on polyurethane. The completed piece was donated to Woodland School, where John's sons had attended grade school. The school awarded the desk to a teacher in a school raffle.

The lower shelf added stability and function to the desk, so John decided to add it to the madrone stand up desk. During the Wood Show the judges had expressed concern about the stability of the desk. Adding the lower shelf made the desk firm and stable. 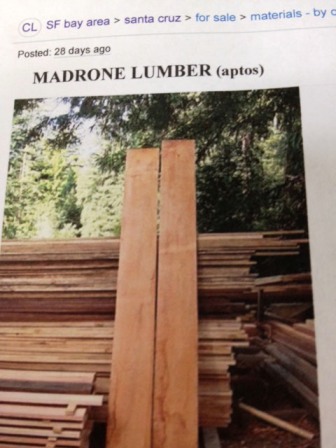 The new desk pieces were made with 1/8 inch shop cut madrone veneers glued to ¾ inch Finnish birch plywood cores. The side table was veneering using Unibond One, a glue similar to Titebond. The directions had been to apply the glue with a foam roller. However, a problem arose. The glue released after coming out of the vacuum press. It was not possible to remove the veneer completely, so John injected Titebond III under all released areas and put it in the press once again. While this appeared to work well, a glue line along the seam between the two sections of veneer released again and was re-glued with copious amounts of Titebond III and clamped in cauls. It worked.

The remaining two tops were glued wing the West 105 epoxy system and the 206 hardner, allowing prolonged working time. Epoxy is the preferred glue system to use.

What had been a glue failure had been compounded by the inherent difficulty of working with madrone—madrone is a tricky wood. As it dries, it does so differentially between sap and heartwood, resulting in checks, curls and bows. Nevertheless, the dramatic character of the wood is worth the effort to use it.

The desk bottoms were made in solid cherry, have floating tenons, and are finished with Tried and True wipe on oil.

John has donated two madrone boards for the BAWA raffle.

Bruce PowellGetting ready for the 2015 Open Studios where he will be exhibiting his work. 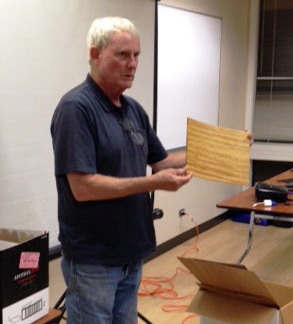 Tonight we got a preview—veneering curved pieces and adding marquetry. 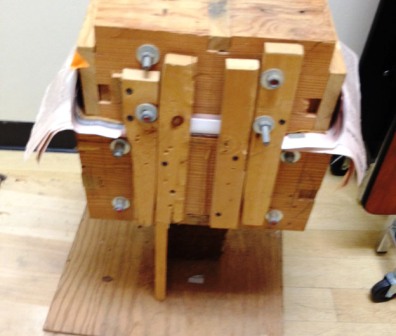 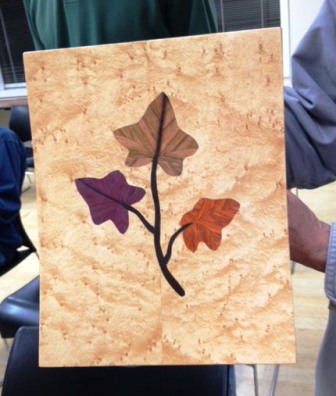 There is a common theme here: time to clean out the garage. John cleaned out all the parts for his office furniture, Bruce found a mold he made 35 years ago to bend wood veneers. He showed us samples of three ply curved boards made from commercial veneers—satin wood, lacewood among others. His objective was to figure out how to do marquetry on curved surfaces. He uses a double bevel technique using his scroll saw. But first he puts packaging tape on one surface of the curved board. He cuts out the figure from the top, then drops the figure down from the top.

He is showing at Open Studios October 31 to November 1. The trays he expects to sell trays in the price range of $85 to $150 depending on complexity. 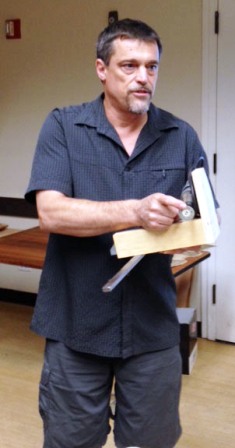 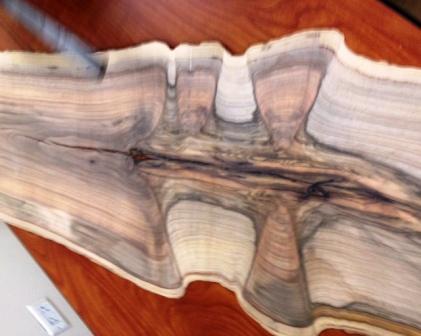 His objective was to cut several slices of veneers. The slab shows the section where the tree was grafted to rootstock. After a trial cut of another material on his 18" Laguna bandsaw, he discovered a problem. The table of the bandsaw was warped and out of specification. He notified Laguna Tools and received a replacement table, shipped from Italy. After allowing the steel to acclimated for several months in his shop, he tested it and found it to be barely in specification, but still unsatisfactory for his purpose. He found Edwards Bay Area Grinding in Newark. This company uses the Blanchard Grinding process that employs a giant grinding head with polishing stones over a giant electro-magnetic table. And it was not expensive. Talk to Claude for the details.

Claude then showed us a fixture he made for his Dremel Drill using a diamond wheel to sharpen carbide band saw blades.

He was able to sharpen a blade in one hour. He recommends the Lennox Trimaster carbide blade because it has bigger kerf, or thicker cutting edge and the gullets are twice as deep and that facilitates chip clearance. 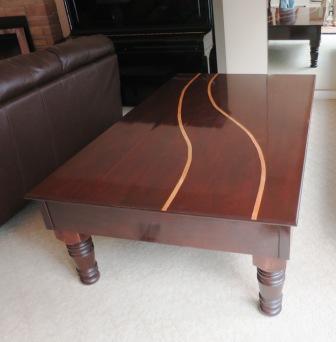 Frank Ramsay was commissioned to make an Indian Day Bed, similar to a large coffee table. Measuring 42 inches wide, 60 inches long it is used as a sitting table by a group of women. He made the day bed from alder with a wavy cherry inlay running the length of the table. It is meant to suggest a flowing river or incoming ocean wave. The piece was stained with both a dark brown stain and a cherry stain. It was finished with Arm-R-Seal

Good job guys. Thanks for filling in.