I received a notice from the CCA Furniture Design Program regarding their "Senior Thesis Exhibition" being held at the Heron Arts gallery in San Francisco. It was described as the final studio projects of our graduating seniors of the class of 2017 in the Furniture program. We have been to several of these events in the past so we went along on Saturday night expecting to see works of furniture. 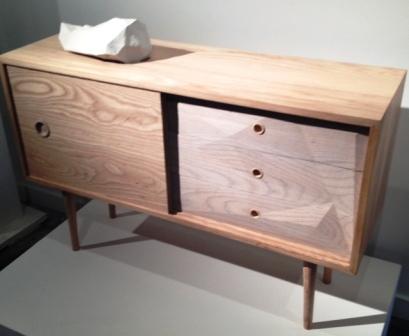 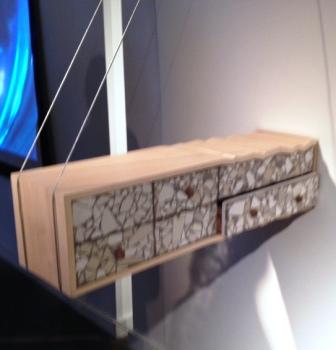 That will leave a mark (aka. crushed cabinet)
Kjetil Smedal

There were 2 interesting pieces there:, a cabinet (credenza) and a small cabinet hanging against the wall, both by Kjetil Smedal from Norway – exhibits that I can accept fall well within the definition of furniture, though why the cabinet had a slip cast ceramic sculpture of a rock as part of it I am not sure. 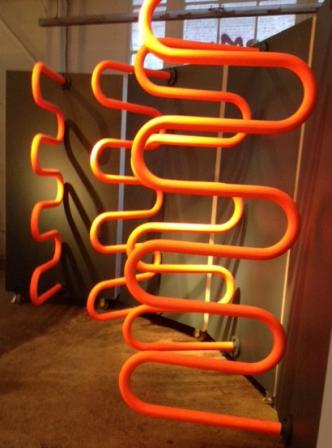 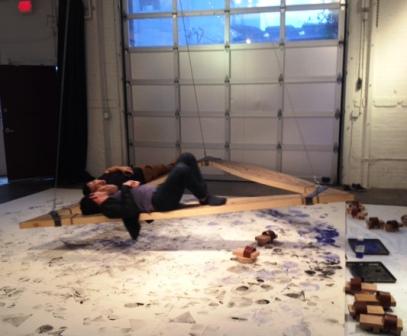 There was also a large orange sculpture - "Toasted" made of galvanized pipe- definitely art, but furniture? and a large tree swing with wooden soled clogs you could put on, dip them in the ink trays and walk around the base leaving marks

The rest included: a couple of silk-screen prints in basic wooden frames, some digital illustrations made on an inkjet printer, a subwoofer speaker system and a couple of cement boxes – to me the furniture aspect was missing; is furniture too difficult these days, or does it require learning too much skill, or just takes too many hours to make so cannot provide a sustainable career?

The argument that woodwork is art has been around for a long time and I think was part of the reason that the CCA dropped the "C" for craft out of their name. But what I saw on Saturday is the woodworking pendulum has swung too far towards art.

At our last meeting one of our members talked of having seen a set of live-edge tables outside a local eatery warping as the tops were bolted firmly to their steel frames with no allowance for the wood expansion and contraction as the humidity changes – clearly who ever built these tables did not understand the materials they were using.

I heard the other day that there are some younger people taking up woodworking but they do not want training; they just want to make something. In our local area I understand this as many people work in software development where the "write it, push it out and then fix it" culture exists. A long time ago I did some software development: I would spend Sunday nights in the office trying to get a few lines of code to work right; change it, test it, look at the results, change it again ... continuing in this loop until successful.

This was OK for my software coding but not practical in my woodworking where I need to have some knowledge of the materials I am using and some skills to be able to make strong joints etc. – maybe time to bring back some focus on craft skills.

Richard Winslow identified himself as a long time member who has not attended meetings for a while.

Dave Clemens, a woodturner, identified himself as a guest.

Frank announced that John Blackmore would be raffling off a Bocote board to a current member later at this meeting - John had offered this to BAWA a couple of months ago as an incentive for members to sign-up and pay their fees for this year.

May meeting the speakers will be will be Mike Bray and Ken Napior.

July the speaker will be Torin Brandborg. 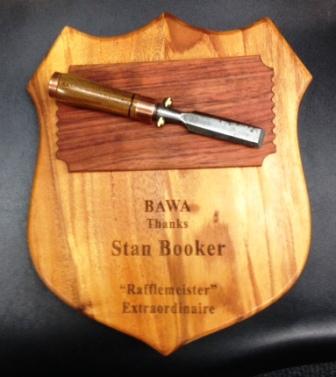 Stan Booker will be able to do the door prize raffle today but is generally unable to attend Sunday evening meetings so we need someone to replace him soon. Frank presented a plaque to Stan to commemorate his long service to the club. Stan also brought a cart full of stuff to give away. The wood raffle of a 3/4x10 ½ x 9 foot walnut board and 3 book-matched pairs of black walnut veneer will be raffled tonight.

Arnie Champagne announced that he has tools for sale and will be listing them on Craigslist.

Claude Godcharles brought a kit to make a cradle for silent auction.

Frank also announced that we need a volunteer to replace Mark Rand on refreshments at the May meeting as Mark will not be able to attend.

Arnie Champagne announced that he wants to sell a 6"x36" lathe with all attachments for $225 and will be offering wood for sale in the near future.

Stan Booker announced that a new Stickley store has opened on Broadway in Alameda, which includes a replica of a coppersmith shop.

Bruce Powell announced that the Northwest Gallery in Seattle has closed. Urban Hardwood has opened there and is selling a walnut slab on a metal base for $48,000.

Mike Bray said that his talk in May will compare using a track saw vs. a circular saw to do similar cuts.

John Blackmore announced that the club now has 55 members and raffled off the bocote board, which was won by Maury Ostroff who was not present. 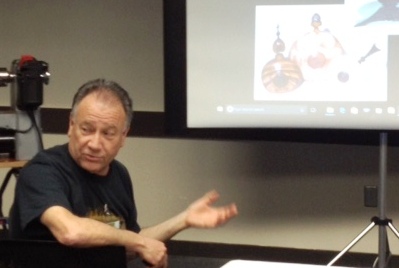 Jon Sauer was introduced by his long time friend Mark Rand whom he met at a Shopsmith workshop.

Jon's first lathe was built by his grandfather and he first learned how to make small bowls. He went on to make bocote pens, manzanita vases, Easter eggs and crosses, exotic wooden boxes with chatterwork tops and grain matched bottoms, a Star Wars radar dish, and perfume bottles with a built in glass vial. He has purchased most of his wood from Miles Gilmer and Mitch Tako. He started selling pieces in 1976 at flea markets and on the street, mostly turned bottles and birthday candleholders. 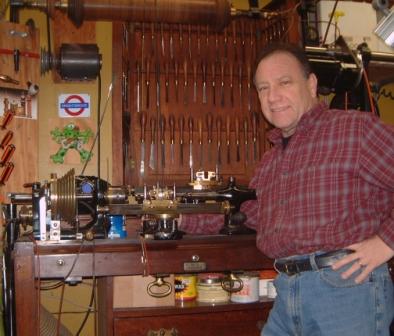 One with the antique Holtzapffel and Jon working on the rose engine lathe.

In 1976 he read a Fine Woodworking article on ornamental woodturning and purchased an antique ornamental turning lathe from England for 1400 pounds and paid $1800 to have it shipped. In 1986 he purchased a much better machine, a Holzapfel #2237, which indexes the mandrel to a specific position. This allows the artisan to do "index carving". This allows Jon to form castle towers, faceted boxes, and spiral designs on bottles. He has formed a zig zag bottle that is in the collection of the Smithsonian American Art Museum. In 1996 he purchased an Armbruster rose engine lathe. This lathe has a touch point that follows a pattern. He uses this machine to make bottoms and lids. The woods he likes to use are blackwood, boxwood, Mexican kingwood, Madagascar rosewood, cocobolo, osage, amboyna burl, bamboo, as well as tagua and betel nuts, acrylic, and sting ray skin. 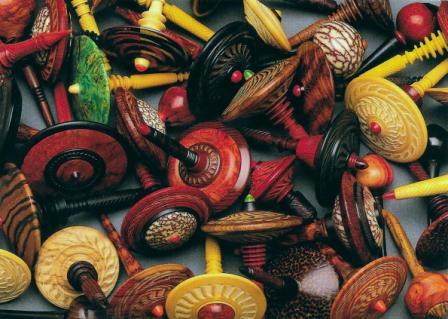 Lately Jon has been building a lot of spinning tops, large pull tops, finger rings made of betel nuts, and light dimmer switches. 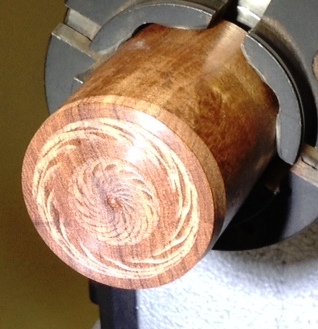 After the break, Jon gave a demonstration of chatterwork on Mark Rand's lathe. In spite of the fact that he was unfamiliar with Mark's lathe, he was able to make the task look effortless.

Some more of Jon's work: 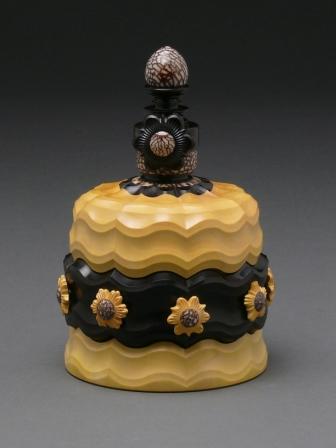 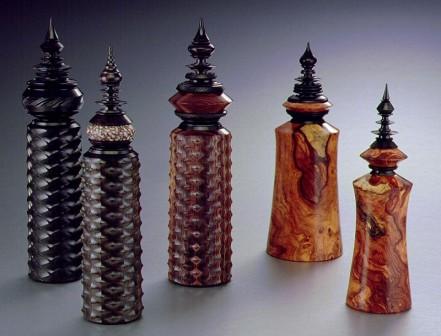 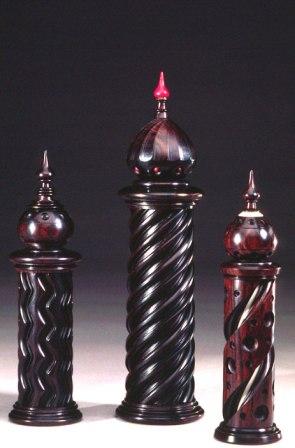 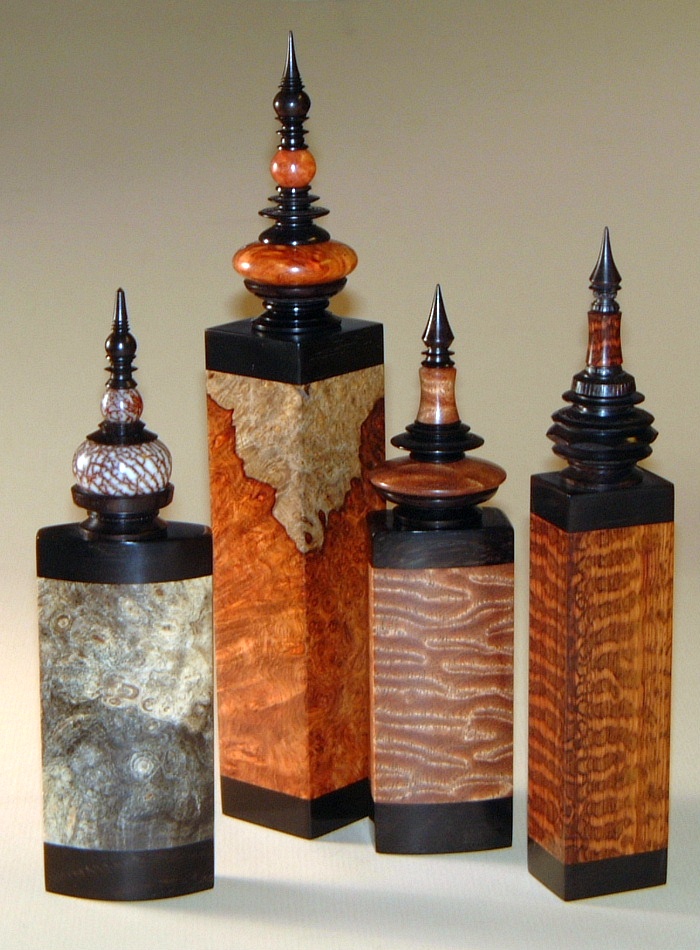 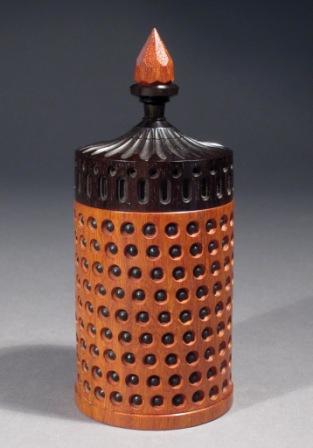 Afterwards, Jon donated one of his tops for auction, which was won by Frank for $21.

You can see more of Jon's work at: pinterest.com

Richard Winslow showed a segmented ball tree ornament he had made. 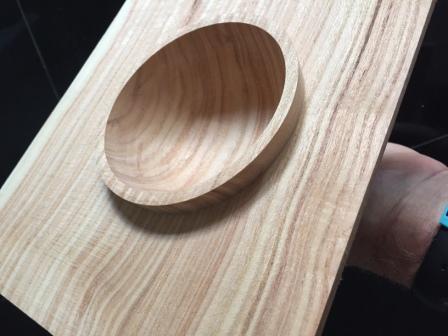 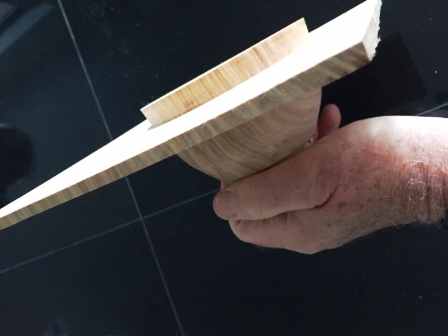 Jay Perrine described a turning class he had taken with Stewart Batty in Provo Utah and showed a turned sphere he had made as well as a square bowl.

Ken Napior showed a mockup of an arts and crafts end table he had made from a 2x4 which shows no end grain except on the exposed tenons. 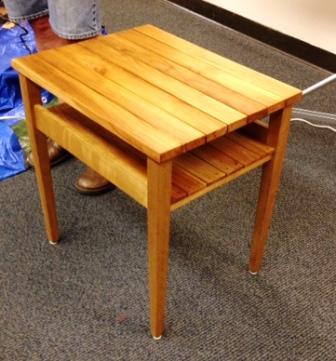 Tom Gaston showed an outdoor end table that he made from salvaged teak. 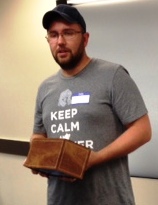 Aaron Blohowiak showed an inlaid Kleenex box he had made.


The walnut board was raffled and won by Arnie Champagne.

The meeting ended with a drawing for door prizes by Stan Booker.