Is wood in its pure form making a comeback? I have just read about wooden models on a TV show that I do not watch and the marquetry in the new Rolls Royce that I do not drive. But it may be the start of an interesting trend for people to see the beauty in real wood. 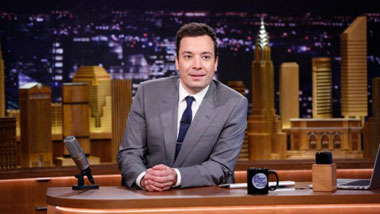 There is an article in this month's Woodworker West that talks about the TV stage set used by Jimmy Fallon on the Tonight Show. The background to the show set which was designed by the famous theatrical set designer Eugene Lee features a city backdrop made from a series of wooden replicas of many of the well known buildings in Manhattan. They look to be made from varnished wood or plywood and are about 2-4ft high. Interestingly Wikipedia refers to the models as "a wood-carved miniature replica of New York City skyscrapers" I would accept CNC cut or even hand-cut but carved seems unlikely. Still it is real wood being used on a major TV set so that is good. 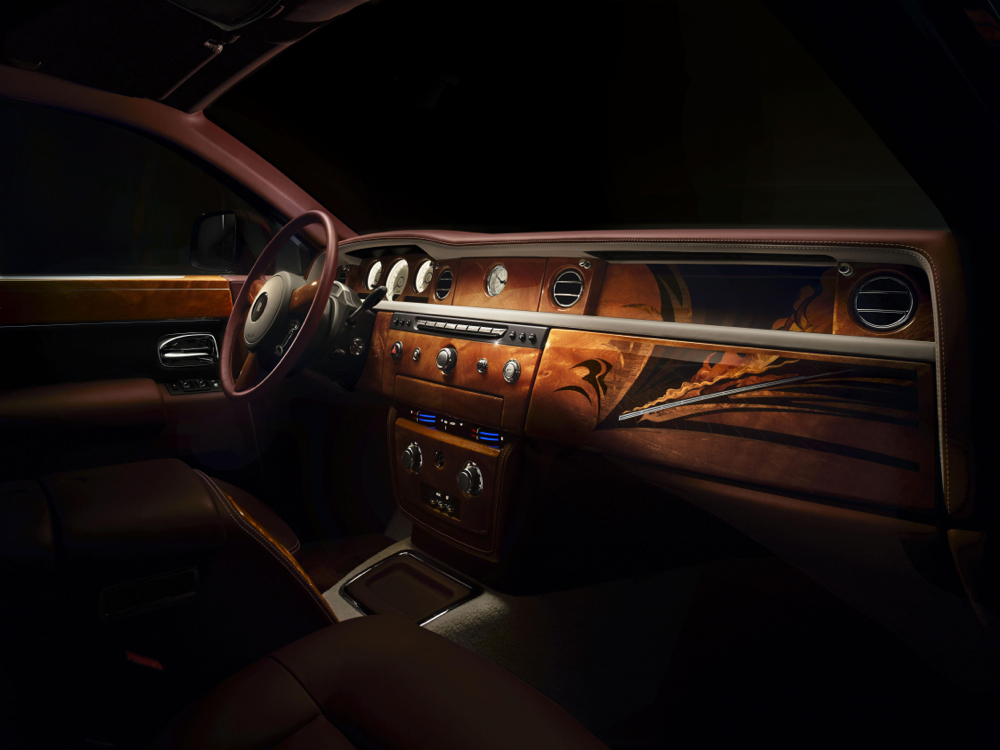 They say 'it is the most complex and intricate marquetry ever seen inside a Rolls-Royce' - not something I can argue with.

"Using methods akin to the artistry of fine furniture makers, Rolls-Royce creates perfection through a process that marries cutting-edge technology with traditional craftsmanship. Individual pieces of wood veneer are laser-cut to ensure precision. Then, a craftsperson painstakingly assembles the sections, ensuring they perfectly express the vision of the marque's Bespoke design team. A fastidious process of quality control follows, utilizing the world's most accurate measuring tool – the human eye."

"In the case of Pinnacle Travel Phantom, 230 individual pieces of marquetry combine to create the incredibly striking motifof a cross-continental train speeding across a landscape with plumes of steam left in its wake. This motif flows across the front-fascia pieces of glove box and passenger panel to the rear picnic tables and door cappings. The same motif bleeds onto the door cards through 24,633 individual stitches, emphasizing the painstaking craftsmanship required to perfectly match the two details."

It is great to see the craft of woodworking come to the fore again. Unfortunately for BAWA members interested in this masterpiece, I cannot find the price but I think it is going to be sold in China – too expensive for American tastes.

Enjoy your woodworking and even if you are not inclined to customize your truck dashboard Rolls Royce standards you can learn something about how to pitch your woodworking from their press release quoted above.

The meeting was gaveled to order by President Frank Ramsay at 7:05 PM. He began by asking for guests and new members to identify themselves.

Matt McGrain identified himself as a visiting hobby woodworker.

Dan Goodman described the Rebuilding Together activity at the Parkside Rascals Day Care Center on April 26th in San Mateo, The demolition work has already been done and Libby Brothers are in the process of pouring the concrete. Our part of the project will consist of modifying 3 play structures, building some rolling bins, and a tire swing. Volunteers should sign up with Dan.

On March 22nd we had a guided tour of the Schoenstein Pipe Organ Company facility. On March 28-30 there was a workshop where 6 BAWA members built wooden handplanes under the guidance of Scott Wynn, two of which were shown during Show and Tell later.

On April 19th there will be a visit to Carl Felperin's shop. He will demonstrate the CNC machine with which he manufactures the parts to his Macintosh chair kit.

On May 15th the speaker at our meeting will be Chris Weiss who is a designer/builder of Japanese style furniture. Chris was responsible for a lot of the woodwork on Larry Ellison's home in Woodside.

On May 17th there will be a full day furniture design workshop in Oakland promoted by Jay Perrine. The instructors will be Paul Felperin, Chris Weiss, and Scott Wynn. Sign up with Jay.

There were lots of items available in the silent auction at the back of the room.

Harold Patterson announced the date of the next Toy Workshop as May 24th, 10AM-4PM at the shop of Bill Henzel, who will provide a gourmet lunch to participants. Members can also make parts in their own shops if they are unable to make the chosen date. Please sign up with Harold. 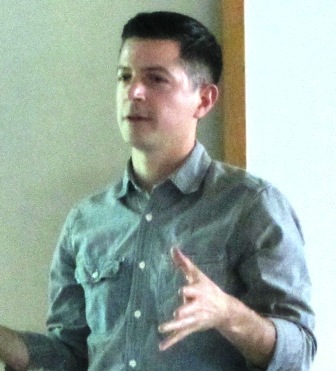 The speaker for the evening, Jared Rustin was then introduced. Jared designs and builds furniture. As a teenager, he became interested in woodworking after watching PBS woodworking shows. In 1993 he decided to become a student at the woodworking program at Cerritos College and built a small wooden toolbox. He sees William Stranger as a mentor in these early days when he began design and building furniture in his own small shop. He considers woodworking more as a lifestyle than a way of making a living. He developed a chair design using bent laminations, wedge tenons, and ebony plugs as well as a table using bent laminations. His first commissioned job was a cherry entertainment center for $3000 on which he earned much less than minimum wage. One of his early design successes was to have his bent lamination chair exhibited at the Harvard Graduate School of Design. A following design was called the Los Altos Lounge chair, which has a high back with headrest. Next was the Palo Alto series chair, which was not based on bent laminations and uses bridle joints between the arms and foot. The next iteration used a sliding dovetail for this joint.

His design process begins with hand drawn sketches, going through full-scale drawings, and then prototypes. His glue preference is Titebond II rather than III because it allows a small amount of wood movement after setting. He then showed a desk made of quilted maple with dovetail joints between top and rails. The top boards were beautifully bookmatched. He then showed a cantilevered coffee table, 60" long x 30" wide x 16" high with a 1-1/4" thick maple top, and walnut carcase. The joinery employs asymmetric dovetails. A picture of him sitting on the end of the cantilever demonstrates the strength of the design. He then showed a buffet made of Port Orford cedar followed by a 7' wide architect desk with a 4' wide drawer for plan drawings. 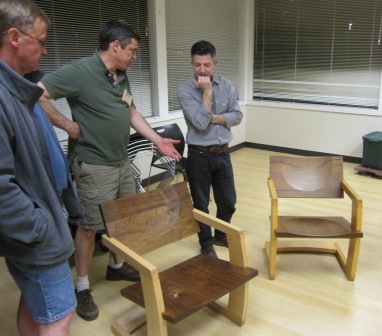 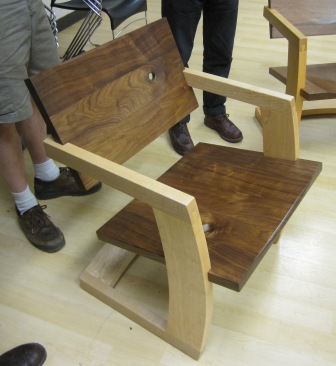 This was followed by his Cupertino dining chair, a picture of a bar in Brooklyn that he built on-site, and a cantilever desk with 3 drawers on wooden slides. The half-blind dovetails for this desk were cut using the table saw and router and cleaned up by chisel.

He then showed his most popular piece, the California Table, cut in the approximate outline of the great state. It comes in 3 sizes, small, medium, and large. It has an oak base stained with vinegar. For a more commercial design he replaced the sculptured wood base with metal legs. He has built 45 of these to date and has many imitators. 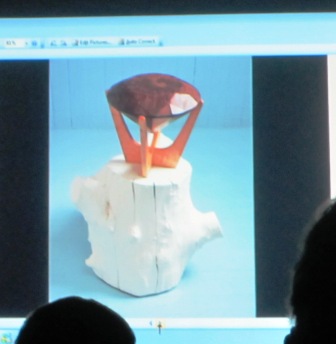 Jared considers raw wood to be like a gemstone dug out of the earth which needs to be refined by the craftsman. In this vein, he showed us his "Diamond" sculpture, which is made from a burl and has 58 facets and is mounted on gem setting-like supports all sitting on a painted stump. The sculpture is finished with Bioshield Hard Oil #9 mixed with Epifanes varnish. He then showed a large walnut table with slab legs using sliding dovetails for joinery, a claro walnut storage cabinet for dishes and flatware, and a 14' long office group worktable which used steel I-beams down the middle as a channel of the electrical wiring. 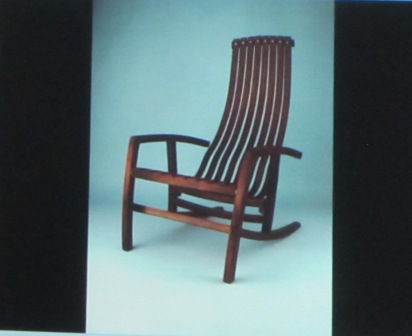 Finally he showed a rocking chair that he designed and built, pointing out that there is a lot of design thought that goes into building a chair that rocks well and does not tip over.

The talk was followed by Show and Tell: 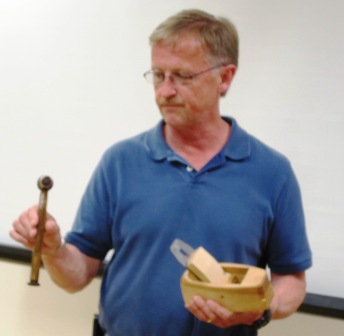 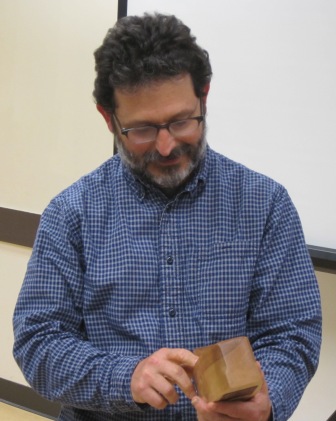 Tom Gaston and Maury Ostroff showing off the wooden planes they had built in the Scoot Wynn workshop. The body of the plane is birch and it uses a Hock blade. 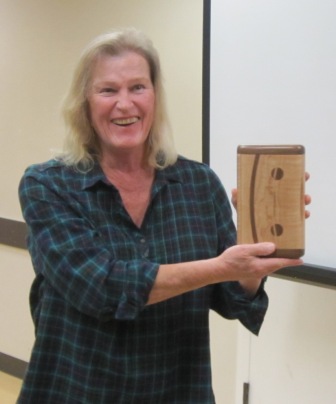 Kim Newberry showed her new "smiley face" laminated box with her trademark rounded edges and pin hinges as well as some golf trophies she built for herself honoring her holes-in-one.

The meeting ended at 9PM following the door prize raffle presided over by Stan Booker.