A few weeks ago I went to the Saturday open day of the new Terminal 2 at San Francisco airport. I turned up at our allotted time and for the first time in many decades was able to walk through the security area without any searches and screening etc. Just like the old days (how nice it would be to be able to go back to the days of just rolling up at the airport and walking, or running, to the plane - but like the introduction of table saws you can never go back to the old ways).

Lots of sustainability and lots of art but for woodworkers the most interesting pieces were the large wooden mural and musical tables created by local San Francisco artist Walter Kitundu. 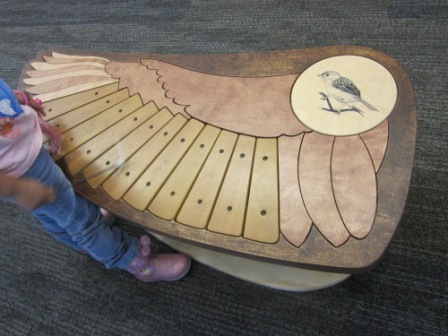 "Using high-quality veneer plywood, which he then hand-stained, Kitundu created two benches shaped like bird wings that double as musical instruments. Serving as the backdrop for these musical benches, is a mural made of inlaid wood featuring local birds such as a Red-tailed Hawks, Anna's Hummingbirds, herons, egrets, Northern Harriers, and Burrowing Owls. The birds, which are printed on wood and also inlaid, are photographs that the artist took in San Francisco. The focal point of the mural is a large bird whose wings, like the benches, are reminiscent of a xylophone or marimba and can be played with rubber mallets. The keys of the instruments are made from a tropical hardwood called Garapa. Each of the musical components of his installation are linked to a specific bird. When played left to right, a portion of the bird's song is heard, in a lower register. The instruments can also be played freely, and they are tuned so that they can be played together harmoniously."

And all build with veneered plywood. It looks, and sounds great. Only problem is you will have to buy a domestic air ticket and work your way through the security lines to see them.

You can find more about the artwork and SFO's new T2 at: flysfo.com/web/page/about/T2/T2_art/

I am writing this on Friday 29 April and in case you have forgotten it is the day of THE royal wedding. Luckily for the royalists amongst you a royal wedding woodworking story came through the emails today otherwise the wedding would be just another of the world events that BAWA passed by. The story is of a professional box maker from Northern Ireland, who was commissioned to create a presentation box to hold chocolate mints, as a wedding gift for the happy couple. The box is worth looking at and maybe you can persuade Mark Rand to modify this year's plain old Box Contest to be a Royal Box Contest! You can check out the box at: hawthornecrafts.com

President Frank Ramsay called the meeting to order at 7:15 PM in our Foster City meeting room.

The visit to the Chinese Junk at the SF Maritime Museum will take place at the Hyde Street Pier in SF on April 23rd.

Jay announced that the main Rebuilding Together activity will take place on April 30th at 6-7 sites on the Peninsula and will include 3000 people in San Mateo County. The BAWA projects will be at 2 day care centers and will involve painting and woodworking.

Per announced that we need a speaker for our August meeting and he is looking for volunteers. The 2x4 contest will be run by Jamie and will take place at the July meeting.

Per also announced that there will be a Hands-On Finishing Class led by our speaker Ted Fay that will take place on May 21st and will cost $70 for the day and will include materials.

Jamie announced that he is offering a small Milwaukee Sawzall as a silent auction item to benefit BAWA. Frank Taylor announced that he has some mahogany offcuts to give away at the back of the room as well as some gun nails.

The building of a Chinese shrimp fishing boat: the Grace Quan

John Hickman introduced the evening's speaker, John Muir of the SF Maritime Museum, who works in the small boat shop there. He discovered the junk as a sunken wreck that had burned to the waterline at China Camp. It had been used as a shrimp fishing boat on San Francisco Bay in the 1880's. Most of the shrimp caught were exported to Hawaii, Japan, and China in those days. The boat was built in China Camp according to designs for similar fishing boats from China and was sailed by Chinese immigrants. The hull was shown on an old USGS survey map when it appeared at an extremely low tide. John waited again for another such tide and used the opportunity to sketch the layout of the hull and structural features. The timbers of the boat had been well preserved by the anaerobic environment of the bay mud that it was buried in. 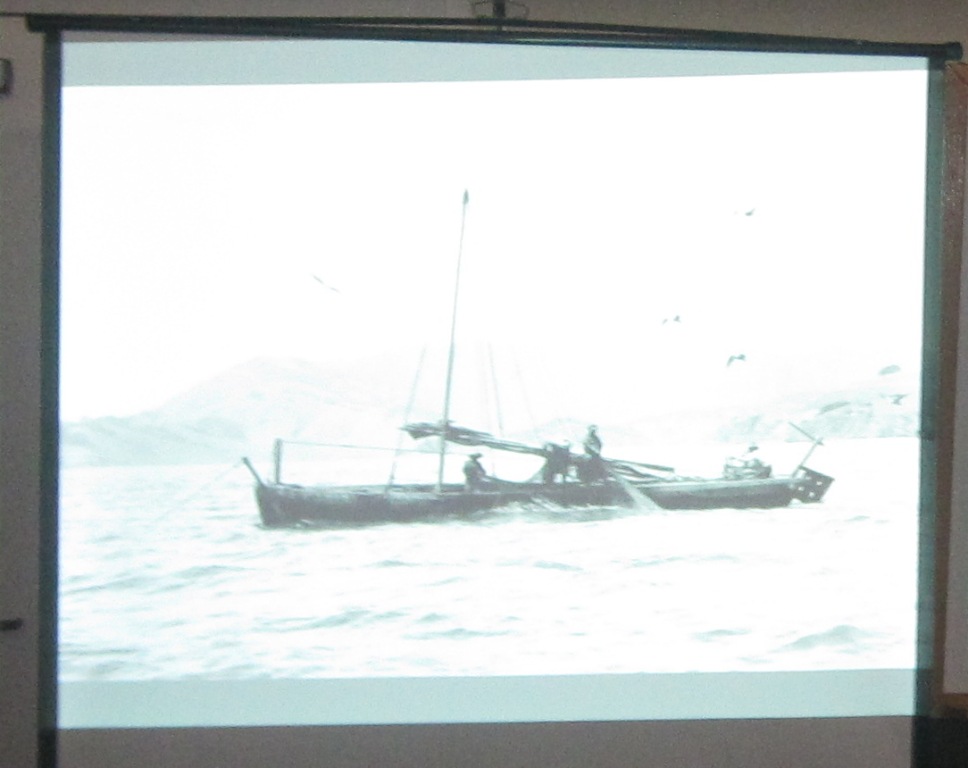 The boat was constructed mostly of redwood and pitch pine and John had about 30 historic photos of the boat as well as census data showing where in China the builders had come from. He was able to use this information to determine where in China he might find similar boats to copy and got a grant to do just that. On the trip to China he was able to get pictures of many of the above waterline parts such as tiller and rudder, mast, transom, and boom as well as details of the daggerboard. He also visited a wooden boat building facility in China to learn their construction techniques. The hull planking was bent by heating the lumber over an open fire and then hot bending it. They used a gasoline engine driven horizontal bandsaw to saw the planks from raw logs, which were some kind of tropical hardwood. The hull planks were side nailed together and caulked with a putty made of tung oil, and ground fresh water shellfish. 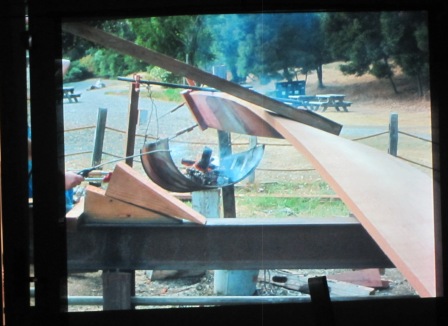 Bending the planks with fire

The trees for the boat were donated by a Redwood City group that was clearing a grove on their land. The transom of the boat was made from demolished water tanks from the immigration center on Angel Island, which is quite fitting since the Chinese builders had likely spent some time on the island. The crew of people that built the boat over 8 months consisted of 5 workers on weekdays and up to 25 on weekends. 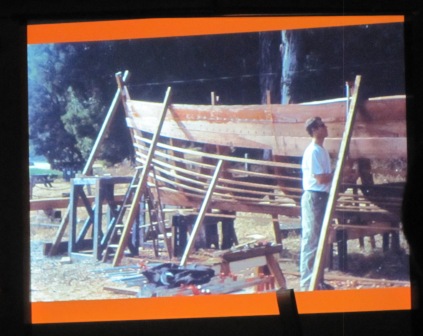 Fitting the plank to the boat

The junk was christened the Grace Quan after the Caucasian woman who married a Chinese immigrant and was the mother of the present caretaker of the museum at China Camp, Frank Quan. The junk is 41 feet long and 11 feet wide and can sail in as little as 3 feet of water with its daggerboard and rudder raised. The sails are hand-stitched canvas with fir battens held in place with twine through small grommets. 900 pounds of steel chain make up the boat's ballast.

The talk was heartily applauded and was followed by many questions. Following the talk, the cedar planking was raffled off and won by Ray MacKinnon who was not at the meeting. Stan will contact him to let him know how to get it. After the door prizes were drawn the membership went off happily into the night.

At 11 AM on Saturday, April 9th a small group of enthusiastic BAWA members and a few associates descended on Barbara Butler's workshop in South San Franciso to tour the magical realm where her creations come to life. We were able to see some works in progress and view her workers doing some finish sanding on a play structure and see how she is able to attain the look of window molding by carving the redwood boards with a small grinder with a sanding disk attached. Barbara gave us a generous tour of the entire facility including her newly built loft office above the shop floor. At the end of the tour Barbara gave each of the attendees a few sample bottles of her custom tung oil based stains that she uses on her play strucures so we could try them out for ourselves. For further information about her company you can visit: barbarabutler.com 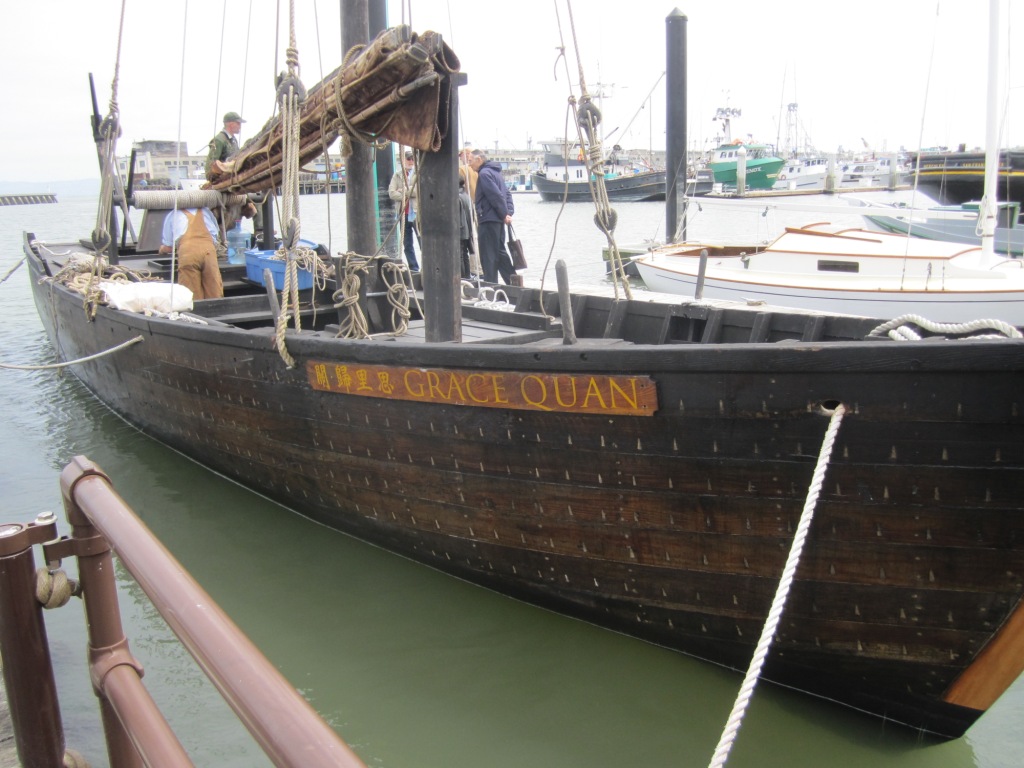 On Saturday, April 21a small group of BAWA members visited the San Francisco Maritime National Historic Park at the Hyde Street Pier. Our recent speaker, John Muir, graciously showed us some of the restoration work they are performing on an antique wooden boat and, of course, we got the grand tour of his reproduction of a Chinese fishing junk, the Grace Quan. Restoration work is also under way on a large wooden schooner, the C.A.Thayer -- so far the hull has been rebuild and only 20% of the original is left, the rest has been replaced with new lumber. It was a very interesting visit and you can visit any day yourself. 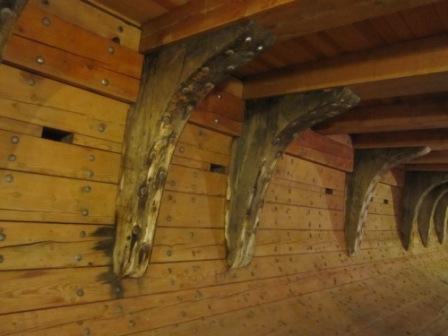 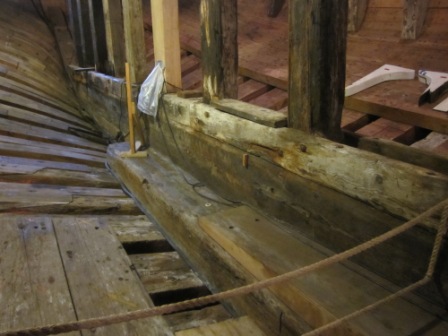 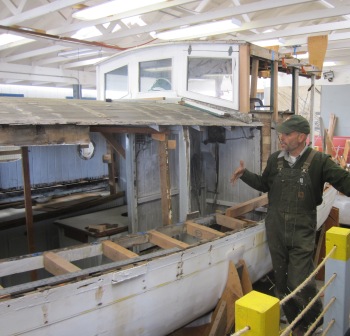 Restoration of an antique wooden boat 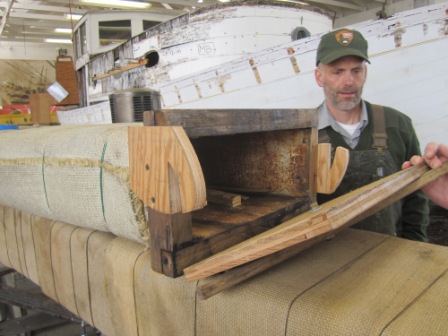 Return to top of the page