It has been a week of woodworking as art.

We visited the Vessel Gallery in Oakland where there was a show called Pareidolia featuring the work of Donald Forescue. He is a Professor at the CCA in San Francisco and used to be the Chair of the Furniture Program. 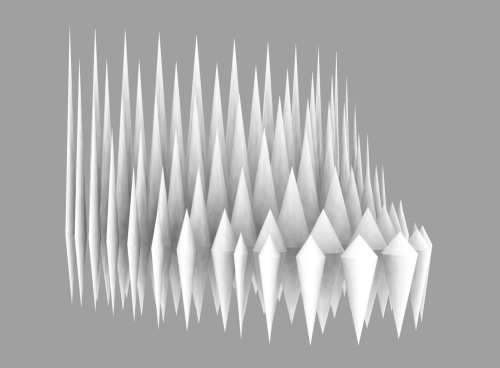 His most interesting work there was a piece called "On the level. #2" which was an installation of 68 recycled redwood objects suspended in an array. (I think #1 was his earlier installation of these objects when they were arranged in a line along the edge of the walls.)

This large array of coopered cones were carefully suspended from the sloping ceiling of the gallery so that they formed an interesting, precisly aligned, assembly. This black and white picture does not do the installation justice. It was both good looking art and also good woodworking.

You can see more of Donald's work at: donaldfortescue.com

The second woodworking artist I came across was Maskull Lasserre. 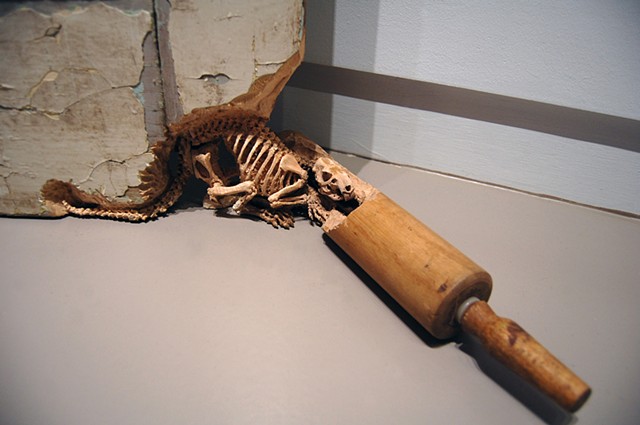 His work is full scale, totally realistic, wood structures of doors, pianos, rolling pins etc. The added "art" bits are very realistic, live-size carvings of the skeletons of rats and other creatures emerging from the objects. Very good sculpture, very realistic depictions made in wood.

The work of this artist is very good, well crafted woodwork but not my kind of stuff. If you take up this style of woodworking and leave it lying around the house it may be good for inducing nightmares.

The third artist in the selection is Katie Hudnall who I listened to recently at the CCA. She is an assistant professor of woodworking at the Herron School of Art at IUPUI in Indianapolis and has been in many publications and exhibitions including one of Fine Woodworking's Design Books. This summer she is teaching a class called "Working intuitively in the Woodshop" so by theses definitions you would considered her a woodworker. 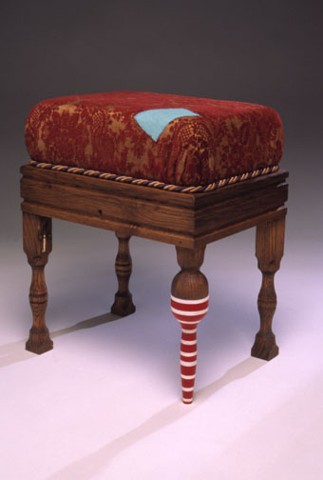 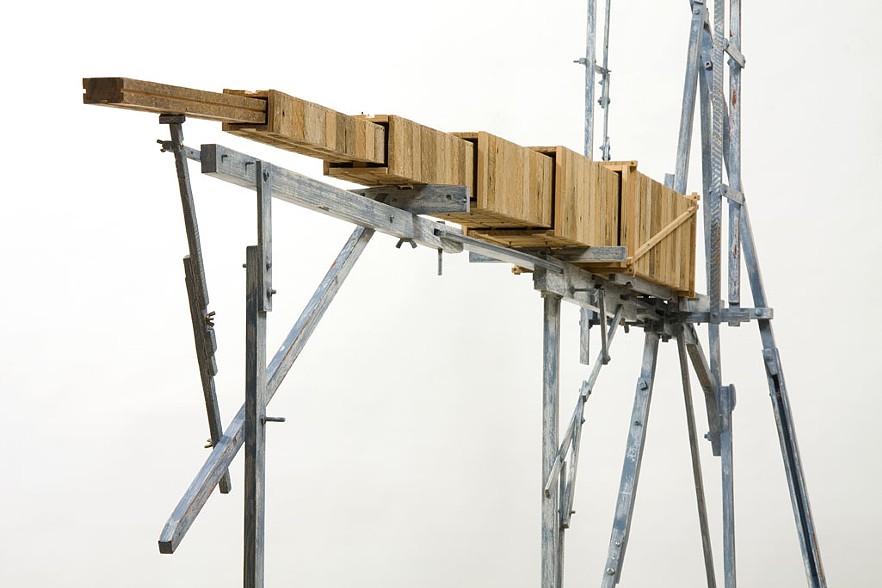 Some of her early work such as the piano stool with a pirate's leg (called the Pirate Stool) is woodworking, joints and all. But some of the other work she showed at the CCA such as "Symbiosis #1: Table w/ draw" is hard for me to classify in the area of woodworking. Art is whatever you want to define as art but woodworking simply whatever you want to make of wood?

Last month I talked about the new trend of making tables by simply putting a finished wood plank on top of a metal frame – no joints and no woodworking skills needed. Well I may have been wrong. 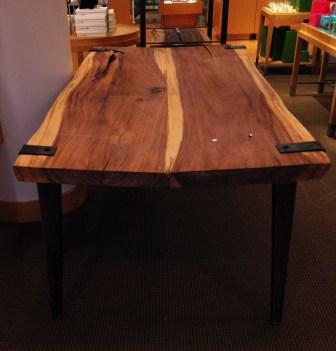 We were walking through Macy's in Union Square the other day and there was a display table made from a natural wood plank on metal legs that had been abandoned and moved to one side. It is hard to see on the picture but the top was bent and split along the middle "joint". No mechanical joint in the top butt joint and the heavy table top (which was in the glassware and pottery section) had clearly failed under the load. The metal legs are solid but there were only two thin bars of 3/4in. angle iron welded between them to take the weight of the table. Maybe there still is a need for woodworkers but not everybody understands this?

Enjoy your woodworking, or whatever you do with wood.

The meeting was called to order by President Frank Ramsay at 7PM by sharp raps of his gavel.

Guest Nathan Kerman from Walnut Creek introduced himself as well as new member, Julian Kahn, who has just moved here from Portland OR. He has built a workbench as well as canoes and kayaks. Also present was Rick Babwin who has been a member for almost a year but was attending his first meeting. He has made cutting boards, cabinets and furniture.

Membership chair Marcus Miller announced that 60-70% of past members have renewed for 2014, and asked for people to send in their dues before the end of March when they will convert to guest status.

Program chair, Per Madsen first spoke about the recent Saturday visit to the Facebook shop, which was set up by member Eric McCrystal. Only 9 of the 18 people signed up showed up for the event indicating that we might need to have a reminder system for these events.

Our next shop visit was to be on March 8th to Schoenstein & Co. Pipe Organ Builders but has been re-scheduled to March 22nd. Details are in the schedule.

The speaker at the March 20th meeting will be Scott Wynn who will talk about handsaws. Scott will also hold a wood plane-making workshop over the weekend of March 28-30. See the schedule for cost and sign up info. Scott plans to have attendees construct a coffin sided smoothing plane. The cost of the workshop includes all materials except for the plane blade.

On April 19th we will have a visit to the shop of our recent speaker, Carl Felperin, of Felperin Design. On April 26th we will have our Rebuilding together effort which will take place at a Day Care Center in San Mateo. We will be partnering with Equinox who will take care of the non-woodworking activities. We will be repairing a play structure, fencing, and shelves. Dan Goodman circulated a signup sheet.

On May 24th we will be having a Toy Workshop at the shop of Bill Henzel. A signup will be available at a future meeting. Frank Taylor made a plea for volunteers to do some of the prep work in their own shops in advance of the Workshop. We are promised a gourmet lunch by Bill. 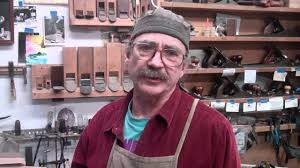 Jay then introduced our speaker for the evening, John Burt, whose topic concerned the fabrication of edged tools in a home shop. John was born in Japan and left with his parents at the age of 2, but still has an affinity for Japanese culture. He learned blacksmithing from Frank Turley in Santa Fe and considers him as a mentor and friend. He then worked for a blacksmith in New York City doing ornamental ironwork in iconic places including Central Park. Recently, he has been doing woodworking for Catholic churches, making specialized wood pieces for liturgical purposes. He has a special love for furniture of the Ming period, which he feels has a timeless beauty. He has also taught classes at the Marc Adams School on making turning tools, forging hardware, and building a tool chest. The specific direction taken in this talk was towards tools used in slow speed cutting such as plane blades or chisels where the metal does not get hot during use. For this purpose John recommends acquiring a suitable piece of W-1 steel in the annealed state from the MSC Company. He recommends them because their prices are excellent, they have a huge selection of sizes, and they deliver overnight. He recommends W-1; water-quenching steel, over O-1, oil quenching steel because the W-1 has more forgiving heat treating behavior, although it is more liable to heat induced distortion under heavy use.

W-1 is designated as a 1095 steel, which means that it has .95% carbon content, which when fully hardened can get to Rockwell 66, but is as brittle as glass at that point. It needs to be tempered to reduce stress and hardness so it will not break under stress. He does not recommend using structural steel, 1020, or high speed steel, 1060, for these cutting tools as they do not hold an edge very long. 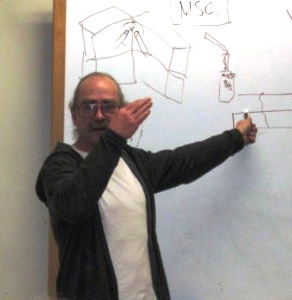 John suggests that the home experimenter purchase 6 firebricks and two MAPP gas burners to make an inexpensive hearth for heating the steel for hardening and tempering. The bricks are formed into a 3 sided enclosure into which the tool piece is placed while the 2 MAPP gas burners are directed at it.

The steps in the process are as follows:

1. Shape the tool as desired for the purpose by either cutting or forging

2. Anneal the tool by bringing it up to a cherry red heat incandescent color to remove stresses

3. Harden the steel to maximum hardness by heating it a cherry red color when it undergoes the transition from body centered to face centered structure. This can be easily tested with a small permanent magnet on a stick to see when the steel goes from magnetic to non-magnetic. Allow the tool to soak at this temperature for a few minutes and immediately plunge it into a bucket of cold water to harden it. The hardness can be tested to see if a file can cut the hardened tool. It should not be able to be cut.

4. Tempering-Use some sandpaper to clean up the surface of the tool so you will be able to see the change of colors of the surface as it heats up in air. Lay a hearth of a piece of scrap iron onto your firebrick hearth and place the tool on it and heat it slowly until the top surface teaches a straw yellow color for plane blades. Then allow the tool to cool slowly. This process reduces the hardness, but allows the tool to flex a bit under stress to avoid breaking. John provided a copy of a guide sheet from Frank Turley regarding the appropriate temper colors for different applications.

John then showed some examples of high quality hand built tools. The first was a knife given to him by Japanese master toolmaker, Yutaike, made from forged steel laminated to annealed steel and allowed to temper at room temperature for over a year. Many of these laminations curl up or shatter in the process and are useless as tools but the ones that remain straight have extreme hardness and great flexibility. He then showed a ½ kilo Japanese blacksmith hammer whose head was asymmetrically placed in the handle so one head of the hammer clearly preferred to face downwards. It was very easy to hold and did not require any effort to keep in from twisting. Next, he showed two beautifully decorated hammers with custom handles. Japanese high quality hammerheads are sold without handles as it is expected that the user will want to custom design his own handle. 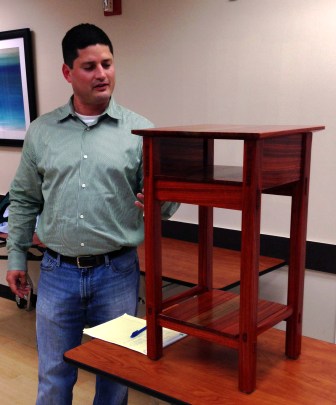 Show and Tell followed after a 10-minute break. First up, Dan Goodman showed an end table he built from padauk with through tenons and finished with shellac and lacquer in hopes that it would preserve the beautiful red color of the wood. 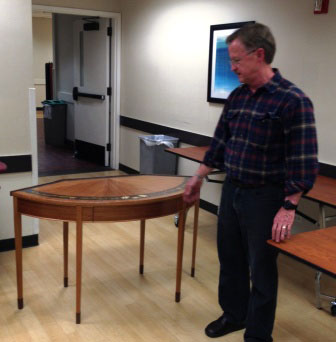 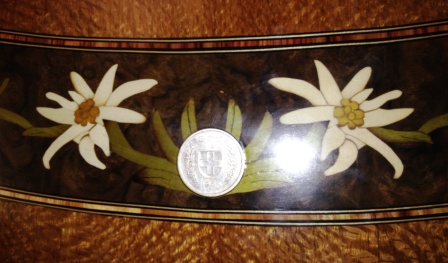 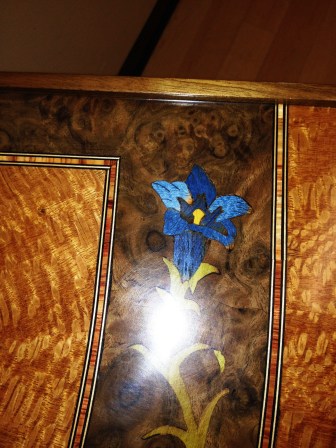 Tom Gaston showed an ironwood bowl finished with lacquer as well as a beautiful curved desk with a marquetry top which he made in a workshop he attended in Santa Barbara taught by Paul Schurch. The table is designed to fit into a bay window in his house and will become his desk. The modified ellipse shape of the frame is formed from veneered bending plywood. The marquetry on the top represents Swiss mountain flowers such as edelweiss and mountain anemone. He also inlaid a Swiss Franc with his birth year into the top. 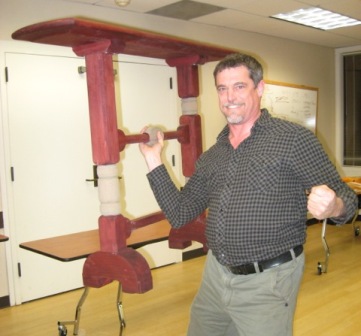 Claude Godcharles then showed an apricot wood bowl he formed using an Arbotech grinder and finish shaped with gouges. The finish was tung oil. He also showed a plant stand made from redwood, which he stained, with the tung oil pigments from Barbara Butler. The mortise and tenon joinery was done on the band saw and table saw. 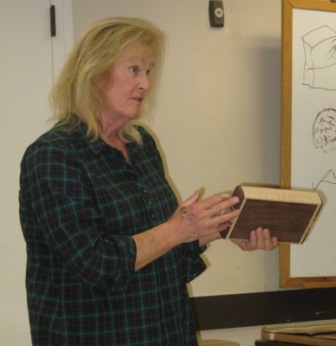 Kim Newberry showed a curved box in which she had drilled the pin holes for the lid incorrectly and was asking for advice on how to fix the problem. Because the box had been sanded to shape, there were no longer any good reference surfaces. No immediate solutions were provided. 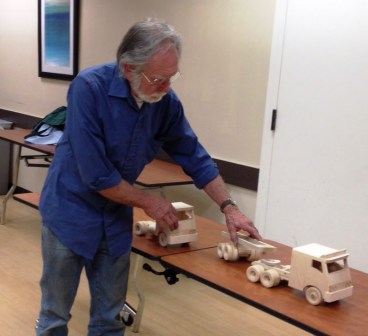 Richard Shirasawa announced that he has several items for sale; a 3-1/4 hp Triton router that is almost new for $250.-, a Hegner scroll saw on a solid steel stand with a foot switch for which he is asking $750. and some Bridge City Toolworks commemorative tools, a CT7 low angle plane, and a CT9 crowning plane for which he is asking $600.- each.

There was no door prize or raffle as Stan was not present.