Is there still a future in nice, well made, wooden furniture?

In the technology companies sprouting up all over our area their offices have come a long way from mahogany row-the offices of the top management of yesterday. Nobody in the new tech companies appear to have their own office. Most do not appear to even have their own desk. Long, shared, tables have become the norm.

The Wall Street Journal quoted that "Palo Alto mobile start-up Color Labs Inc., employees work on long connected tables made by CEO Bill Nguyen from sawhorses and blonde-wood boards that he bought from Home Depot, at a cost of about $60 per desk." - limited opportunities for furniture suppliers.

Many restaurants and bars these days are using reclaimed wood for their interior wall coverings and furniture. Much of the furniture I see on sale in the little boutique shops is made from reclaimed timber.

But for woodworkers, all is not lost - reclaimed timber is in.

I am not a fan of reclaimed wood furniture that looks like it is made from reclaimed wood. It sometimes appears to be an excuse for rough workmanship. Just cut and screw, or even nail, together and cover with epoxy resin.

I do like the furniture made from reclaimed wood that shows the woodworker's skills with well executed joints and finishes etc.

We are looking for new pictures to add to our Member Galleries.If you would like to have any of your projects displayed in our gallares then please send me a picture with a short description.

Check our Gallaries at: Member Galleries

You can find links to our past articles, speakers, galleries etc on our website by going to our Site Map by clicking the the bottom of the Home page or under the Questions menu: Site Map

Tonight the meeting was held at the original Facebook woodshop on Page Mill Road in Palo Alto. Building 3, the location of the meeting, was difficult to find and to compound the directional difficulties, no one remembered to put a sign out front to identify the meeting site. We apologize to those of you who strove to find the meeting unsuccessfully. We will do better next time.

The Facebook woodshop is immense, located in an old Beckman laboratory building. The shop instantly became the envy of all. It is stocked with the latest and newest woodworking equipment, two Saw Stop table saws, a Powermatic lathe, and so much more. Frank introduced the Facebook shop staff: Robbie is the team leader who is supported by Philippe and Michael. Robbie had been the production engineer before he was called upon to run the shop. The shop is not yet open to general use by the Facebook employees, some legal issues remain to be resolved. The woodshop is being used to produce many fixtures for the new Facebook campus. And this is where the Plywood Challenge has come in.

Tonight we were to see the fruits of endeavor our members had contributed to the new Facebook Campus via the Plywood Challenge. The pieces were scattered around the woodshop and we all gaped in amazement. How could such great furniture pieces be produced from such low quality plywood? Interested? Now you, like the rest of us, will have to wait until after the presentation of our featured speaker: Bill Henzel.

Scott Heeschen joined us tonight as a new member.

We also welcomed the following guests: Bruce Berg, Seth Harpending, and from Rebuilding Together came Adam Witmer and Jake Bryan.

The upcoming meeting schedule promises lots of great woodworking: John Economaki, from Bridge City Toolworks is joining us for the June 21st meeting, in July Jamie, Arnie and John McCormack will show their favorite mortise and tenon techniques, Ted Fay returns in August for more finishing techniques and in September John Blackmore will talk about chair building at the College of the Redwoods.

Ed Marinaro encouraged everyone to start thinking about the BAWA Wood Show for 2012 that will be held in October. Subsequent to the meeting, Frank Ramsay announced that Claude Godcharles has agreed to co-chair the Show Committee meeting with Ed this year. We welcome Claude and encourage all members to join in and help make this our best show yet.

Stan Booker said that the walnut raffle boards are to be awarded to a lucky winner tonight.

Dan Goodman gave a slide show presentation of the Rebuilding Together project in Daly City to replace a residential exterior staircase. What was envisioned as a weekend project became a five-weekend project. Over 600 man-hours were devoted to the project, with over 400 hours from BAWA members. Dan and Frank Taylor designed the staircase using Sketch Up and Solid Works. Cal Water and BAWA made the foundation forms and over three cubic yards of concrete were pumped. Jay Perrine lined up the pumper, making life easier for everyone. Demolition was accomplished on the first weekend, concrete work the second, and the staircase went in on April 28, and was finished on May 5. Dan Goodman cooked a barbeque lunch and we heard something about a bacon explosion. Any pictures Dan?

The project was suitably inscribed on a cement post pier with: BAWA MMXII. Along with the Roman aqueducts, this project, too, will last. The slideshow was impressive, showing not only the magnitude of the project, but also its excellent execution. Way to go, everyone. 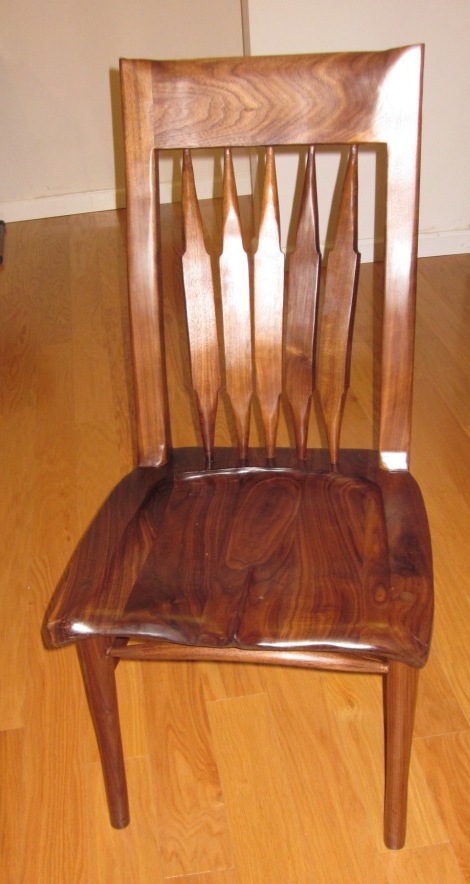 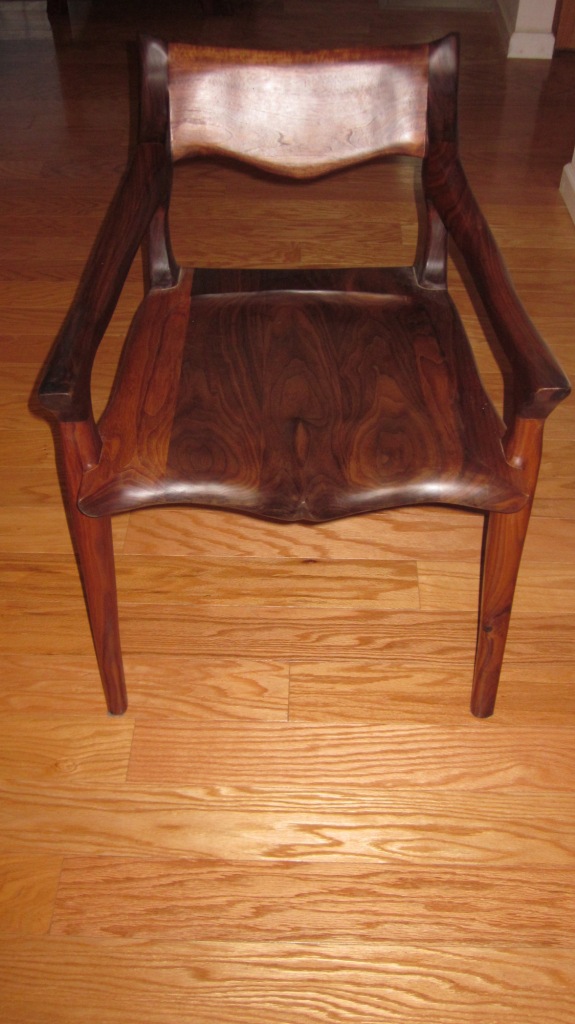 Bill has been a BAWA member for years, having served before Frank Ramsay as the president of the club. Bill began his presentation by showing us photographs of the new shop he completed a couple of years ago, attesting to something we have all learned: to do good woodworking, you need a good shop.

Bill made his first chair 25 years ago using a Craftsman radial arm saw. It has withstood the travails of time including the boisterous behavior of many dinner guests. Not unexpectedly, it has suffered some racking problems resulting in failed joinery. His second chair, made from mahogany, had joint failure at the stretchers, but from this chair, Bill learned. His third chair, a mahogany desk chair was made with mortise and tenon joinery and has not failed.

Last year, with his new shop completed, Bill embarked on a new chair challenge: make two low back Maloof style chairs out of walnut. As a retired research chemist, Bill put his research skills to use by surveying the literature and found several design elements he liked, but not all in one chair design. So he designed his own. He started with a Maloof style, but did not want arms and he did not want straight stretchers.

The seat was glued up from five 8/4 walnut boards that had been roughly shaped before glue up with a Festool circular sander/grinder.

Windsor style front legs were inserted into the seat through holes made with a brace and bit. The legs were formed on a lathe, and were end tapered with a jig purchased from Lee Valley. The tapered end was tested in a blank block of wood with an identical hole to that in the seat. Once inserted, the leg was fixed with an end wedge.

When shaping the elements of the chair, Bill used spokeshave, files and Sureforms. The rear legs were attached to the seat with mortise and tenon joinery, secured with 3" screws, then capped with ebony plugs.

Bill used a digital caliper to find the precise diameter of the stretcher tenons, then measured the center for leg mortises and drilled the holes by hand, eyeballing the appropriate angle.

The slats for the chair back were roughly formed on the band saw, and he formed the slats to final shape using the spokeshave and scrapers.

We all had the opportunity to sit in the chair that Bill had made. Now he only has nine more to go?

But what good is a new set of Maloof style chairs without a new table. Yes, Bill researched this opportunity carefully as well. He liked expanding tables using a racetrack frame, and butterfly tables were nice too. And then there was the expanding table with drop down legs; very ingenious. Rectangular or round, that was another question to address. Rectangular was good because it would be narrower and could seat more people, but pedestal bases on round tables were elegant.

Bill decided upon a pedestal base, and an oval top, almost rectangular, but with slightly rounded sides. The black walnut base was made with mortise and tenon joinery, the top arc radii were drawn with a flexible thin wood strip. The walnut boards of the top were joined with wood biscuits. 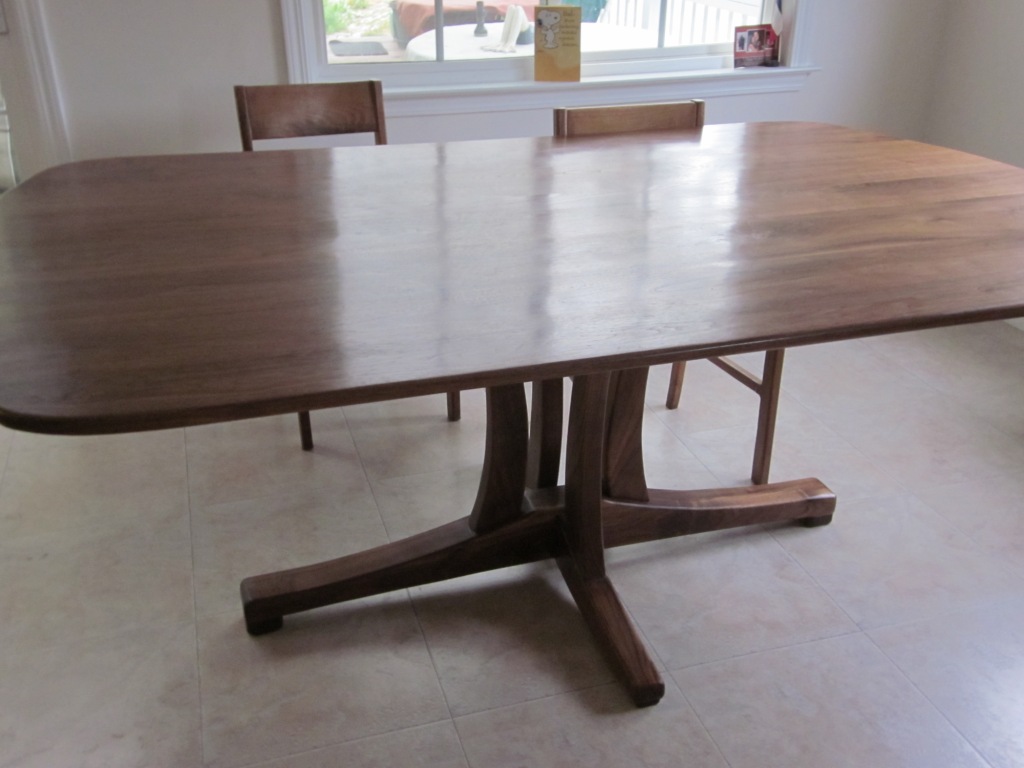 You have done beautiful work, Bill. Nothing attests to fine furniture building like a new shop.

This event was the shocker: how could such beautiful furniture be created from such ordinary, even ugly plywood? You be the judge, I think it affirms the talent and commitment of the BAWA membership. 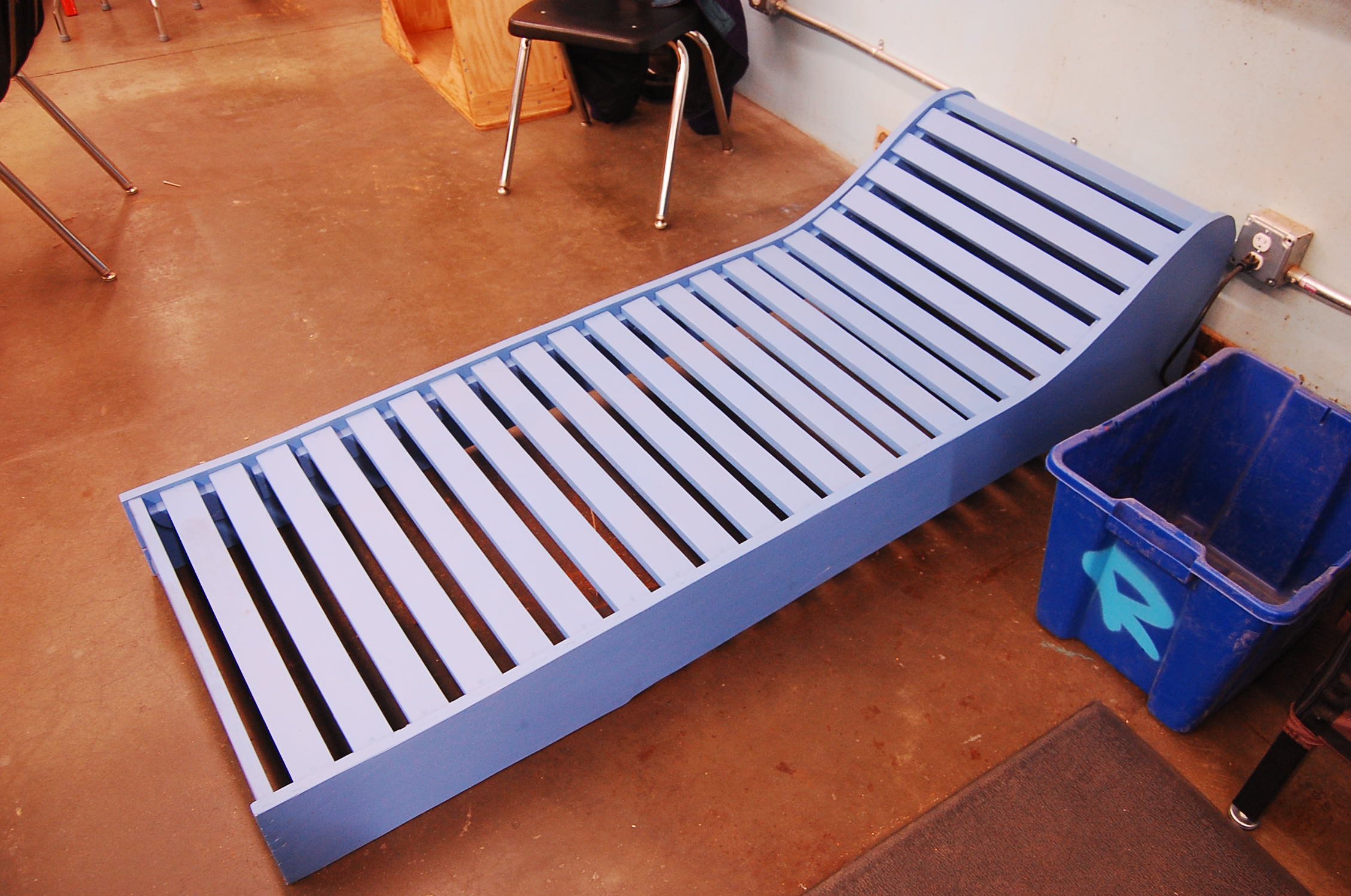 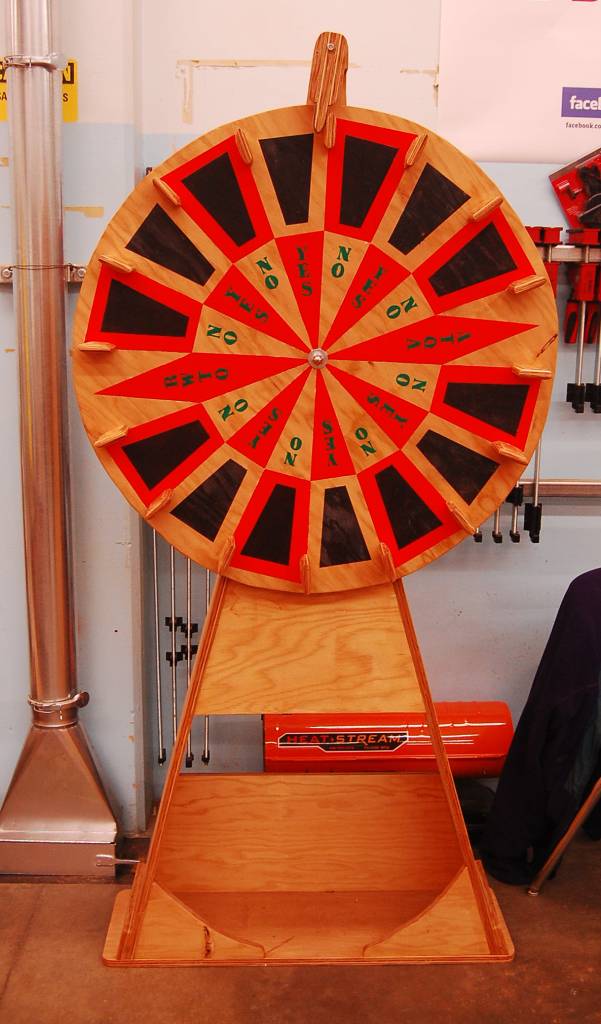 Frank Ramsay made two items: the roulette answer making wheel and the Queen of Sheba bench. The vertically mounted spinning wheel had "yes" and "no" segments and two mystery segments: "RWTQ" and "ATQA". Can you guess the meaning? Ask Frank if you need a hint. 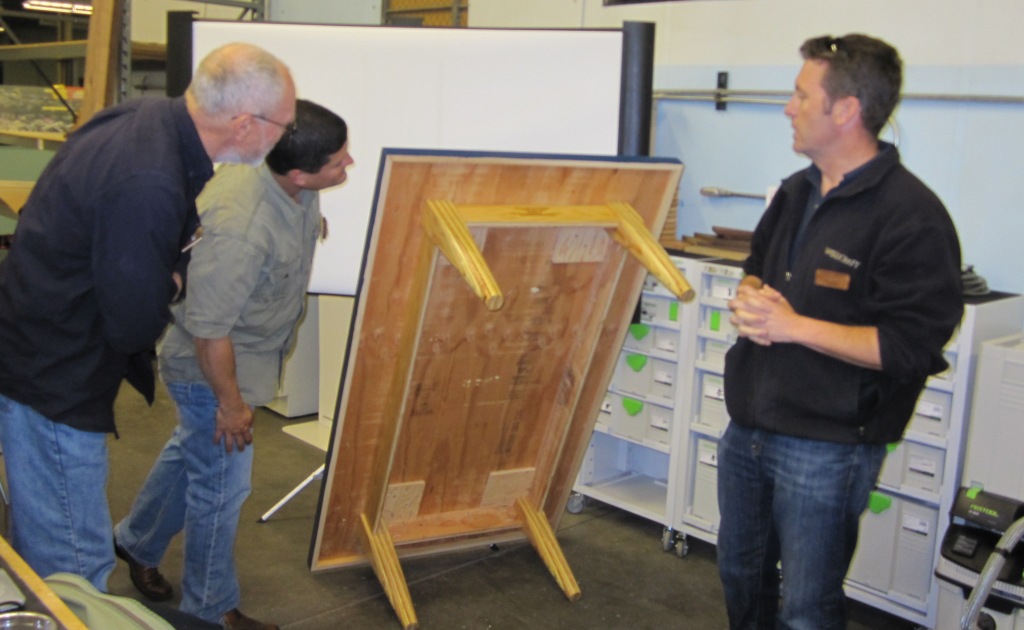 Eric McCrystal made a coffee table with a Facebook blue top and turned legs formed by gluing up layers of plywood. Eric does not recommend turning plywood on a lathe. 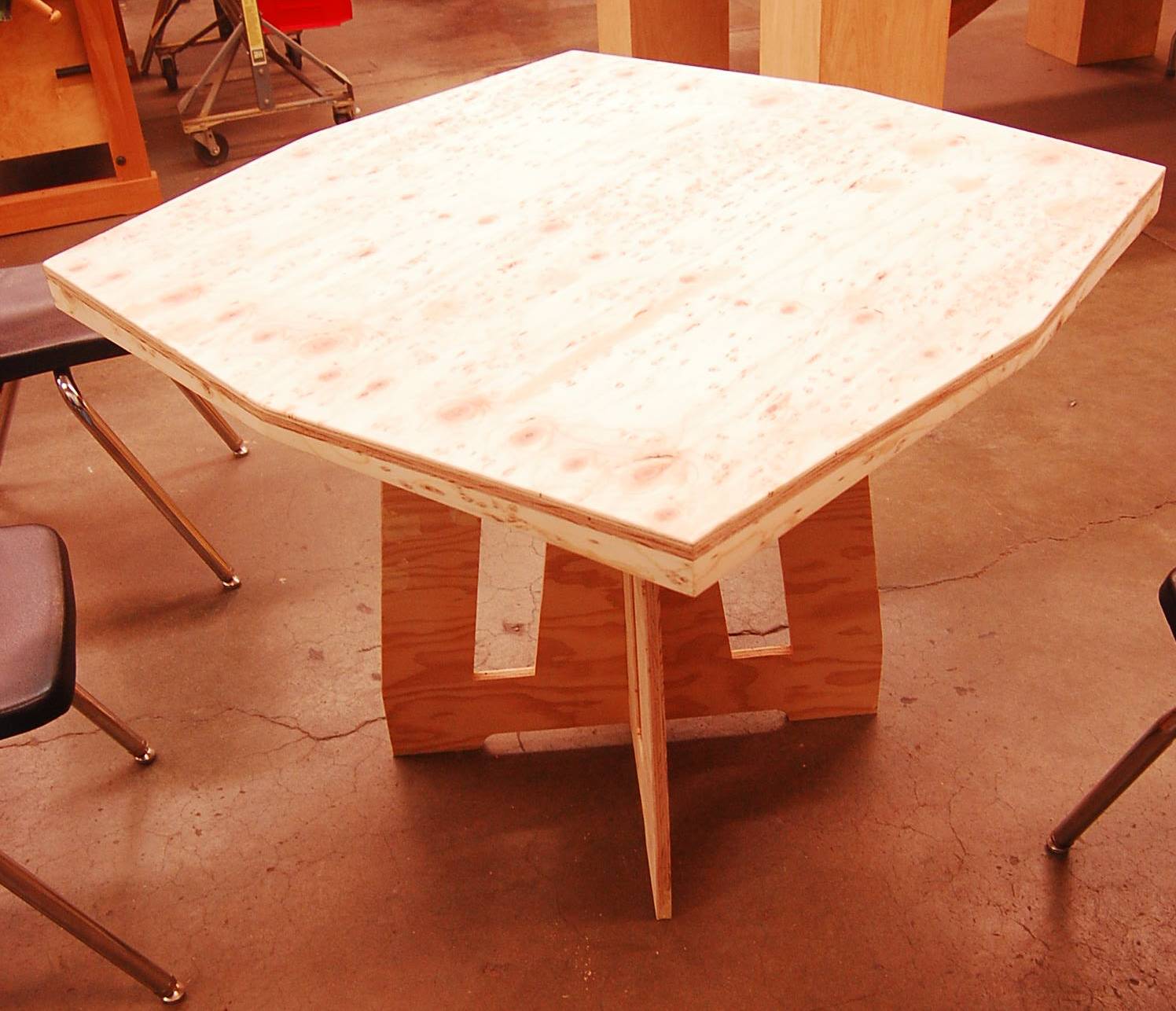 Stan Booker almost did not make it to the meeting. First, he thought the meeting was in Foster City, but more importantly he did not realize the Challenge was tonight. He thought he had another month. Guess he has not been reading the BAWA Newsletter on the website. Anyway, he realized his mistake and finished his table except for the finishing in time to bring it to the meeting. His plywood sheet had a bird's eye pattern on one side and he used it to his advantage to create a strikingly elegant table. 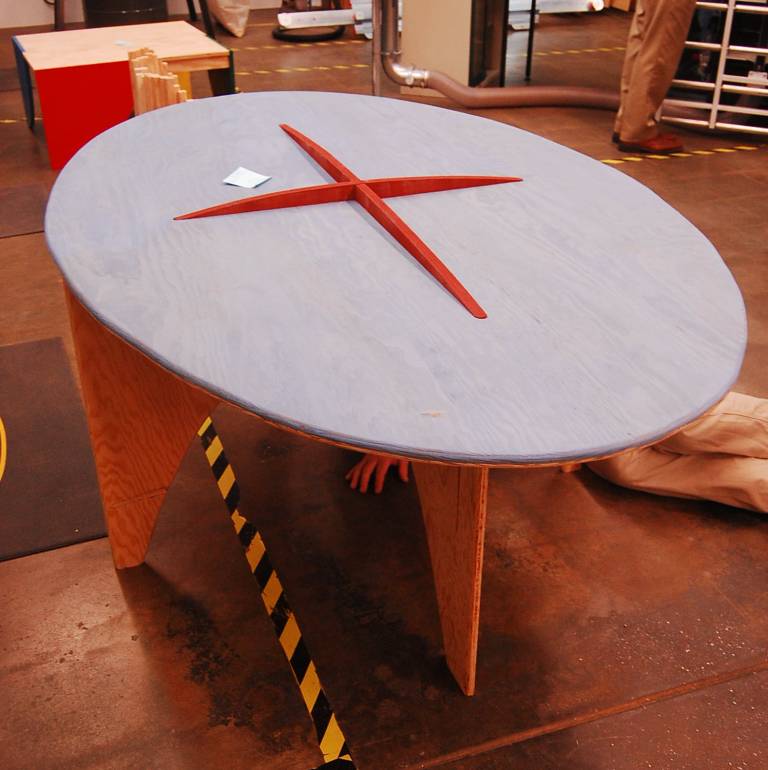 Marcus Miller made an oval table with a Facebook blue top with a interlocking base that projects through the table top to create ridges intersecting at right angles. The design is based upon the proportions of the golden ratio: 1: 1.6. Dan Goodman made a chair from 527 pieces of plywood, 255 vertical sticks to form the seat and back and 272 spacers. He used 32 oz. of glue and made the chair in 32 sections. 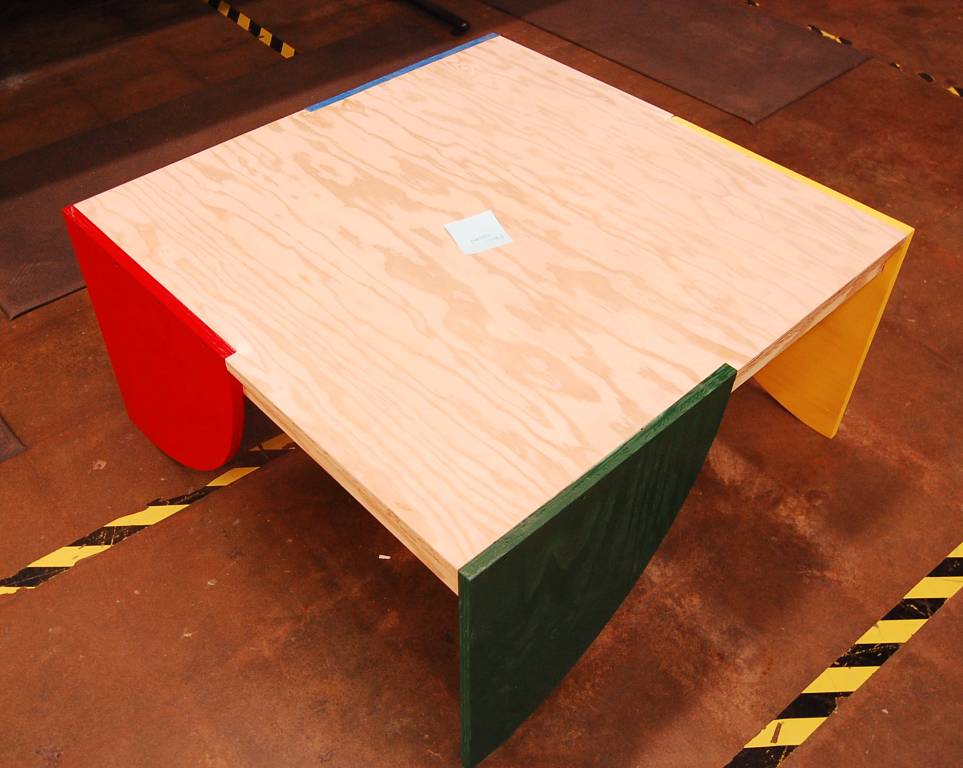 Paul Sedan made a coffee table with a natural finish on the top and legs of green, yellow, blue and red. The legs were cut as 1/4 circles and attached at each corner. 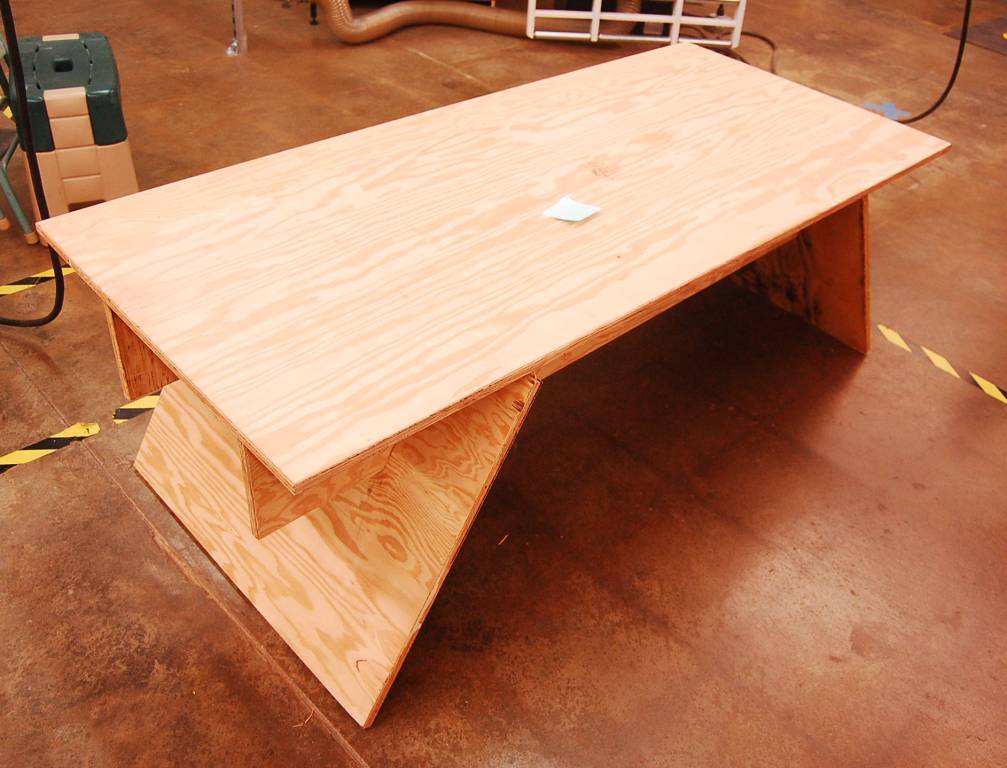 Jay Perrine made a long table supported by two wide legs cut from plywood sheet that project from the top at an angle to the floor. Ed Marinaro made an end table with a shelf just below the top supported on one side by two short lengths of conduit pipe and supported on the other end by the plywood cabinet side. John Wilson made a Facebook blue bench with a fold up seat that accesses a storage compartment. 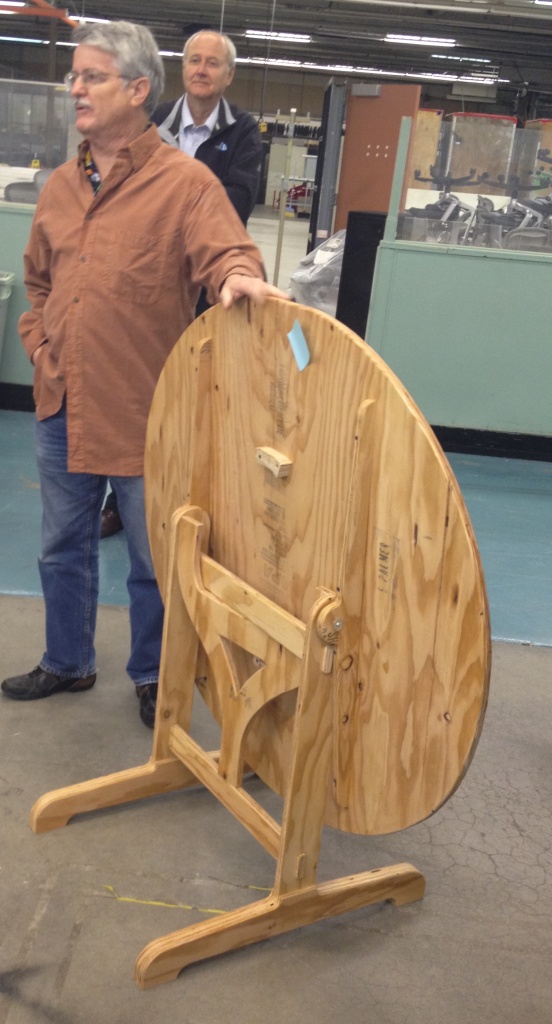 Neal White made a round table with a side-folding top on a pedestal base. 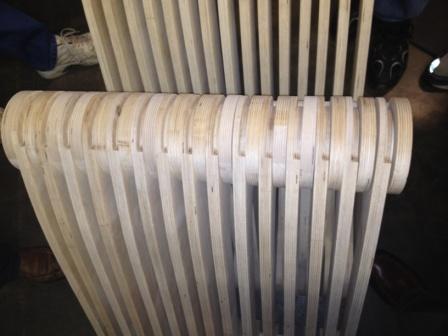 Phillip Chang made a table with an adjustable angle top that can be used as a drafting table or used flat as a conventional table. He used a steel and wire tensioning system as part of the leg structure.

Phillip also brought in another plywood project he had made for his personal use, using Baltic birch stock. The lounge or deck chair is made in three sections: back, seat and leg rest using vertical pieces of plywood joined using spacer pieces on a frame of PVC pipe at the flex points between chair sections. This chair is made in a beautiful, elegant flowing form that is very comfortable. It folds up easily in spite of the weight of all the plywood used in its construction.

Kudos to all: Bill for his beautiful dining room furniture and to all participants in the Plywood Challenge.