I think this is another first. I am using this message to talk about this building - the US State Department. 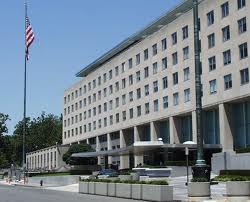 This is a most boring looking 1960's concrete structure devoid of any architectural merit.

But, it is also the home of one of the greatest collections of 18th and 19th century American fine furniture.

There are a set of rooms in the building called the Diplomatic Reception Rooms. They opened in 1961 with the standard wall-to-wall carpeting on concrete floors, brown paneled walls and unattractive acoustic tile ceilings. The walls of the rooms were floor-to-ceiling plate glass with exposed steel beams.

Then just after they opened they went through an amazing transformation. 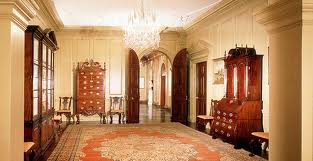 " The Diplomatic Reception Rooms began in 1961 under the visionary leadership of Clement E. Conger (1911-2004). The first impression visitors have of the rooms is the Edward Vason Jones Memorial Hall, dedicated to the talented architect who transformed the reception rooms into the rare, classically balanced, and dignified rooms seen today. The Gallery, with its gracious Palladian windows, serves as a gallery for portraits, landscapes, and American Queen Anne and Chippendale furniture. The John Quincy Adams State Drawing Room, where the Secretary of State receives distinguished guests, contains furnishings that are early American masterpieces selected for their historical associations with the founding of the republic. The Thomas Jefferson State Reception Room reflects architectural elements inspired from Jefferson's residence at Monticello. American Chippendale furniture appears with paintings of early views of America to create an intimately elegant room for official luncheons and dinners.

The largest room is named for the father of the American Foreign Service, Benjamin Franklin. Designed by architect John Blatteau, the room celebrates the long-standing role of the Secretary of State as custodian of The Great Seal. This elegantly gilded, state dining room is the primary room used to entertain guests. These rooms, and the $100 million collection contained within, are America's gift to the nation." 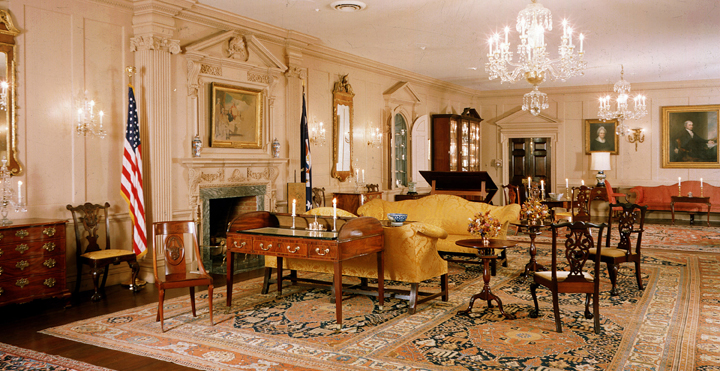 This is certainly on my list as a must see for our next trip to Washington.

Cocktail with a woodworker?

I have just read in the San Francisco Examiner about a new cocktail lounge, Hard Water, on the Embarcadero. The bartender, Jennifer Colliau, has been crafting fine cocktails such as the Bourbon Lift for 17 years. She is also a furniture maker and worked as a cabinetmaker and did refinishing and restorations. She also taught woodworking.

Not a combination of carears I have come across before.

Frank Ramsay called the meeting to order at 7PM. Guests introduced themselves as follows:

Heather Trosdahl, College of the Redwoods;

Note: Heather has shop in Oakland and she will be our featured speaker in August

Fred Thompson, a new member, who has recently retired and returned to woodworking and needs advice;

Fred Berle, who has retired recently;

Mauricio Chambron, College of the Redwoods.

May 17th through 25th: The Dogpatch Café is showing works from students of the College of the Redwoods.

The Silent Auction has a router table to sell. John Seybold is offering soft maple boards and finishes to give away as he is leaving the area.

Arnie announced that he is closing his shop and wants to sell a lot of tools. They will be listed on the website,

Stan announced the raffle of the Padauk boards as well as the door prizes at the end of the meeting.

The report on Rebuilding Together will be given next month.

Per announce the upcoming program events for the next few months. All the info is on the website. He emphasized the 2x4 contest, which is coming up in October, and the likelihood that Jamie already has the perfect 2x4 ready to go in his shop.

John makes custom furniture in his shop in Sonoma. He belongs to the Sonoma Woodworkers Association. His presentation is built around questions from BAWA members collected by Per. They are:

How do you go about designing a chair?

Where do you go to learn about chairs? 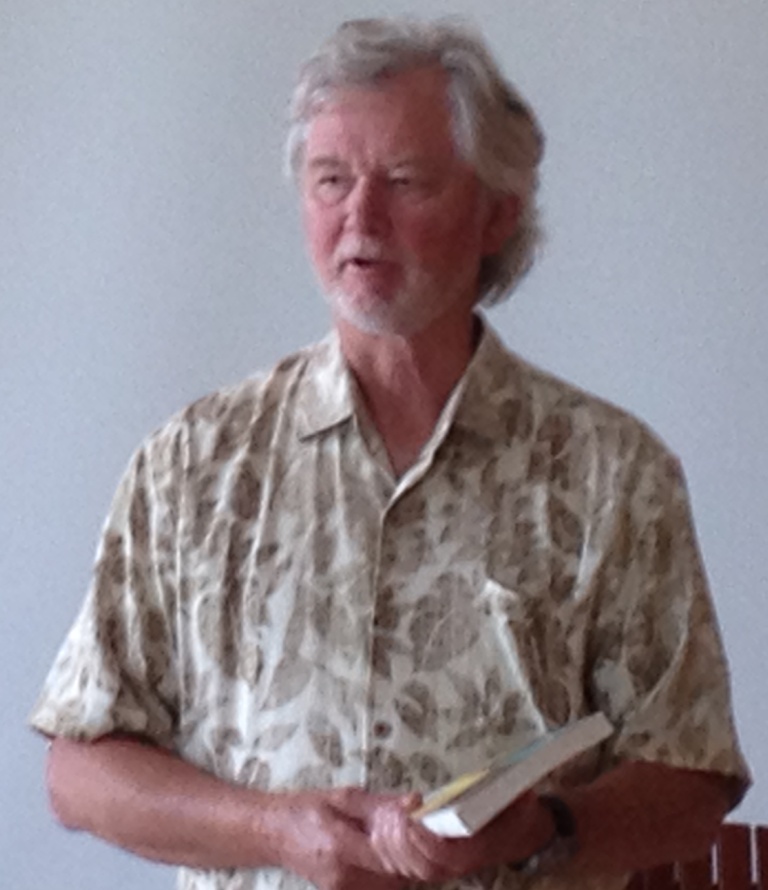 John obtained his formal woodworking training through a two year intensive program at the Fine Woodworking Program at Santa Fe's Community College. He likes the book, The Chair by Galen Cranz who is a professor of Architecture at UC Berkeley. He finds it quite good but difficult to read with a lot of detail on classic designs and the problems with these designs. The basic flaw is the human body is not designed to sit motionless so it remains unbalanced while trying to remain static in a chair. Another book he recommends is ChairMaking and Design by Jeff Miller. This book discusses how to build chairs and includes design and building techniques. It is a good starter book. A third book is published by Fine Woodworking and is called Building Furniture. A fourth book is Tradition in Contemporary Furniture published by the Woodworking Society, which shows a lot of nice designs. A fifth book is entitled Furniture for the 21st Century which also shows a lot of nice designs. The last mention goes to Just Chairs, which covers the history of chairs back to 1325 BC and has a picture of the earliest known chair used by Tutankhamun as a throne. He also highly recommends a series of articles by Alan Marks that appeared in Fine Woodworking Magazine numbers 31, 32, and 33. 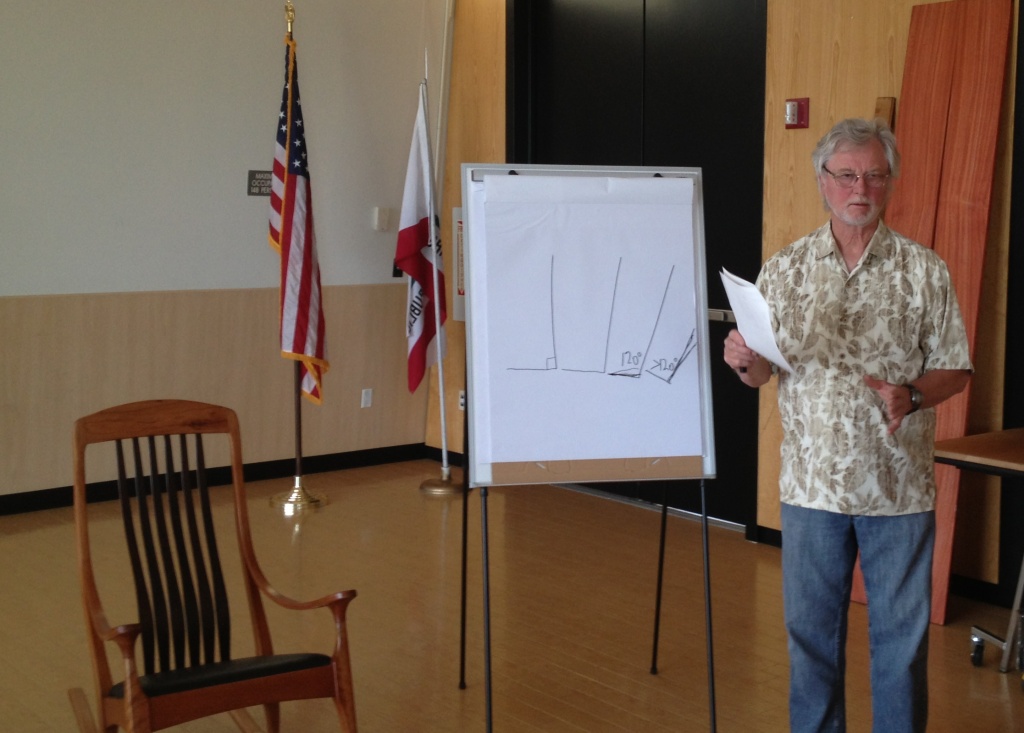 The board lesson on seat angles

One needs to pay particular attention to the angles in chairs. The angle between the seat and the back varies depending on the type of chair. Dining chairs start at 90 degrees. Alan Marks shows typical angles for various chair types and mentions that at 120 degrees one starts to slide off the seat. When this angle approaches 120 degrees you begin to slide off the seat.

Frank asked how do you design a chair? What is your motivation? The first step is to always have a sketchbook handy so you can doodle ideas. Keep adding sketches and never erase anything and you will eventually come up with something. As an example John showed a rocking chair with bent laminated arms. He wanted a design with lots of curves. He first builds a full size mock-up of the design using MDF screwed together. This is so he can see all the design elements full scale.

Arnie asked how one goes about designing a chair to the dimensions of a specific person. The mouth, the angle of the back to the seat does not change much from person to person. John uses templates to define this dimension so he does not know the specific angle.

John makes 3 types of backs: laminated flexible slats (a favorite of Bob Erickson), hand carved spindles (a Maloof favorite), and a combination of the two. He leaves the slats loose at both ends so they can give in response to pressure. He has tried to come up with unique backs such as upholstery with ladders, but it should not be too crazy. Crazy does not sell.

He likes an oval shape for the seat rather than rectangular. He always cuts a seat template first. One reason he prefers the oval shape is that this allows the front legs to be placed at different points on the seat, giving each chair a unique shape. . Small changes to these legs can have a dramatic effect on the look of the chair. He strives for an elegant look typified by a design that consists of fourteen 3/32 in thick maple laminations. It was shaped using c-clamps on a wooden form.

A dramatic lamination that is both the front leg and side stretcher of a chair.

Question: How do you hog out the seat? He makes typically makes the seat out of 5 boards glued to together side by side. He cuts the rough shape of the seat into them using the bandsaw before glue-up. He cuts the center blank first and then uses that one to lay out the next nearest neighbors, which he then cuts out to lay out the final pieces. He clamps the pieces up without using dowels or biscuits and finds this to be quite strong and straightforward to do. When laying out the pieces it is important to consider the end grain, not the face grain. Make sure the end grain forms a continuous pattern. After unclamping the seat he uses a 4 1/2 in angle grinder with a carving wheel to waste out most of the wood, followed with various attachments of progressively finer grits. If he uses a Maloof joint, he uses colored epoxy to highlight the joints. As a result the joints don't have to fit perfectly snug. 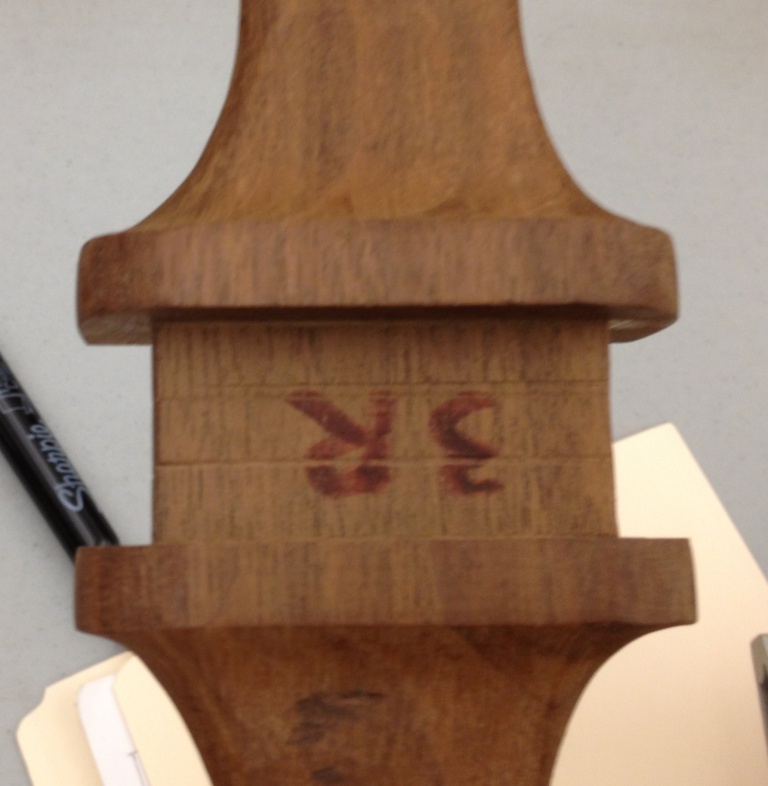 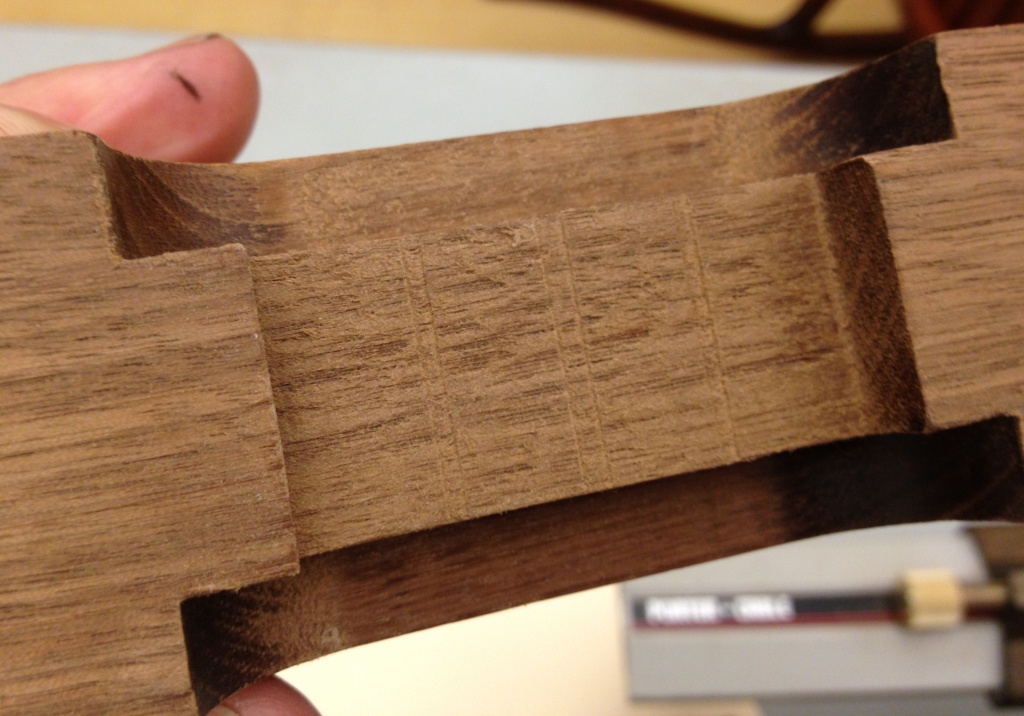 To do the legs he uses a template so that the seat is held at 15-degree angle to the ground. John has refined the shape of the rockers for his chairs over many years. They do not need to be parallel to each other and the chair should rock easily and gently so that if you kick your legs out you should feel like you are floating. An important element is to have the front of the rocker be relatively flat so that when you try to stand up it gives you support and does not rock away from you. The pivot point for the rocker is 3-4 inches in front of the rear leg. To get this correct he sets the chair on the rockers and cuts the legs to length in several cuts. 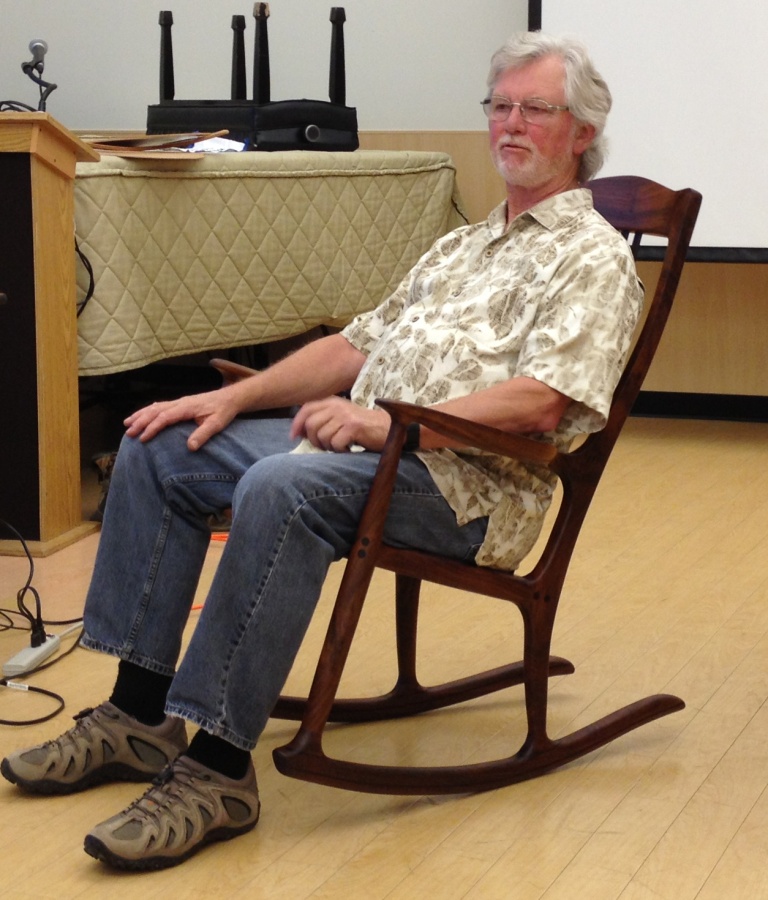 The angle between the seat and the back varies depending on the type of chair. Dining chairs start at 90 degrees. Alan Marks shows typical angles for various chair types and mentions that at 120 degrees one starts to slide off the seat.

His standard rocker uses 1/2 inch dowels for its joinery and Maloof joints for the front and back legs to the seat. The laminations are tapered before glue-up. The tapering is done in a planer using a sled. It is important to use straight grain wood for this. 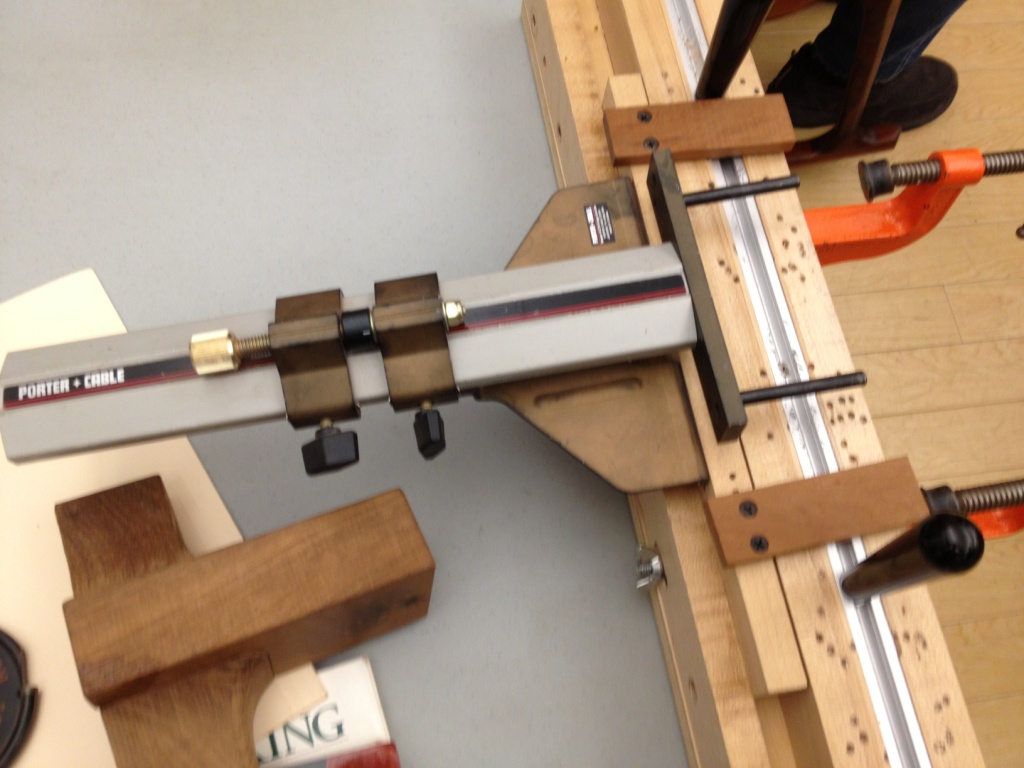 Question: How do you cut mortises and tenons? John only uses floating tenons so just needs to cut mortises. For this, he uses a fixture he discovered in Fine Woodworking, which mounts a router and holds the workpiece by means of two C-clamp type fasteners. Wood wedges can be used to cut mortises at compound angles.

Upholstery-there is a lot of literature on how to do it. There is a tendency to make the foam too thick. When sitting, you are sitting mainly on your two sitbones, so you can't sit on them too long without padding. As a result the foam needs to be more dense at the center and softer at the edges.

Preferred finish? - Danish Oil. But if time is of the essence he sprays lacquer and shellac. Water based lacquers have become better, but the overall best finish is still Cab Acrylic Lacquer with lacquer thinner as the base.

Ken Napier showed a book display cabinet he built with filigree decoration and glass doors. There was lots of excellent casework and the design has bracket feet. The doors were veneered with sapele inlay. 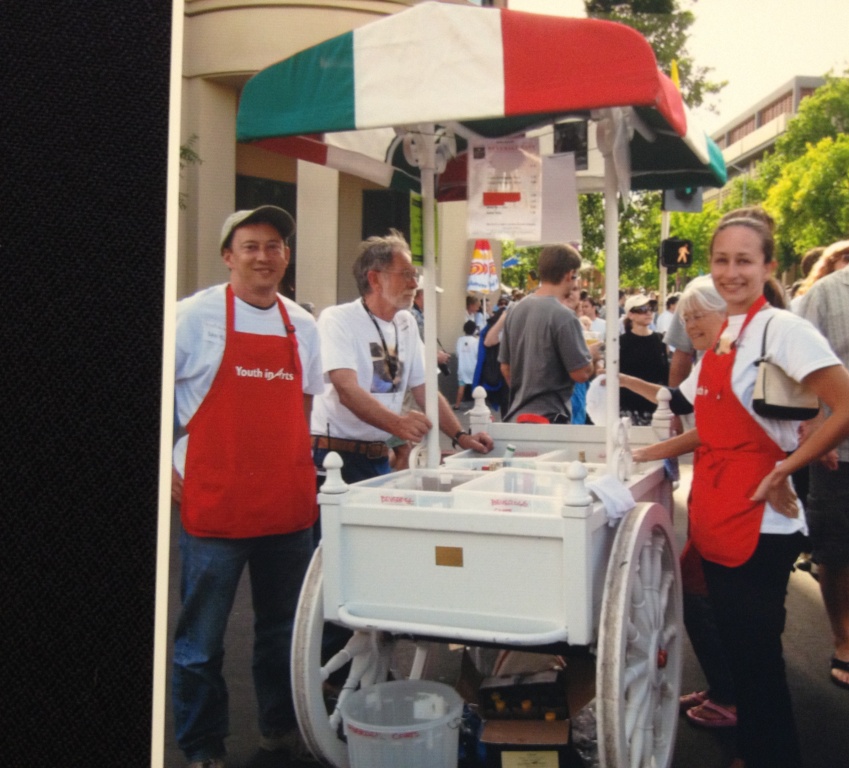 Frank Taylor thanked the 8-10 people who worked on Rebuilding Together and asked for help with the Italian Street Painting Festival in San Rafael where he needs volunteers to help sell wine and beer. It takes place the first weekend in June.

Stan Booker talked about some recent remodeling he did on his1909 house. In the process of doing a bathroom addition he was able to salvage a cedar linen cabinet containing two boards 7 feet long by 3 feet wide and 3/4 inch thick. He is not yet decided what to do with them. 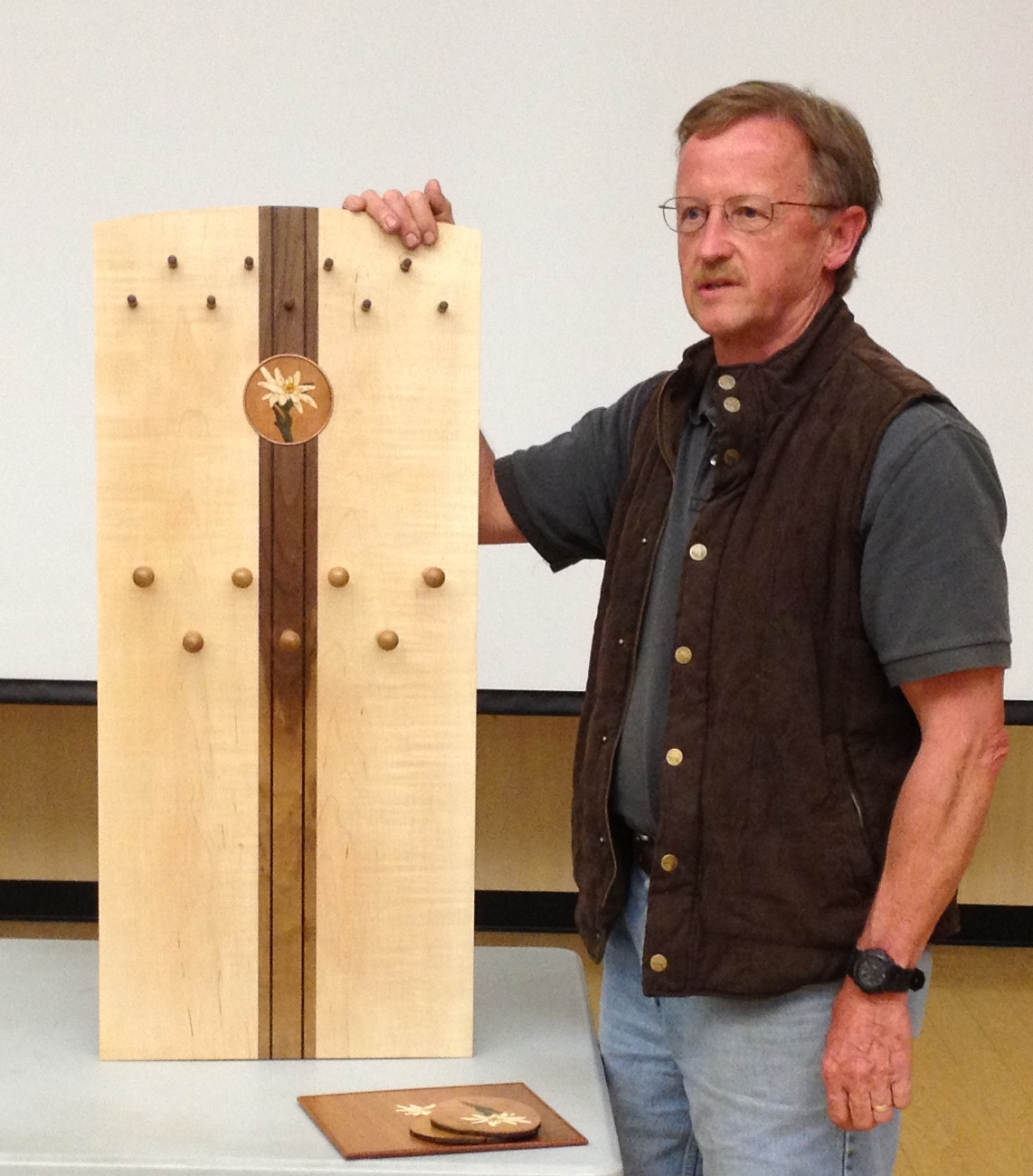 Tom Gaston showed a Mother's Day gift, which is a board designed to hang necklaces and beads with a marquetry flower. He also showed a coaster with marquetry, which is the beginning of a full coaster set which he will eventually make.

Arnie won the router table in the silent auction and the meeting ended with Stan giving out some door prizes to the lucky winners.