We reported to you on our finances and are now studying how best to balance the present situation.

Our paid membership is down, room costs are up and we have been continuing to pay nominal honorariums to the guest speakers invited to the association.

We will be announcing a series of skill-improvement seminars soon. As well as being beneficial to our existing members it may encourage more people to join our association and at the same time help our cash flow.

We are looking into other facilities able to us in the Bay Area; it should be easier now since our meetings on held on weekends when traffic congestion is less of a problem and location is not an issue.

I think that having guest speakers is beneficial to the club as they present different aspects of woodworking.

So far this year presentors have included a master carver, a harpsichord maker, a professional finisher, an ornamental wood turner, a professional woodworker on the options of cutting sheet material with circular saws and an Associate Professor of Forestry on the direction the forestry industry is going with suitability and new markets for wood.

We have many skill sets within our membership and could ask them to make more of our monthly presentations. This would reduce our costs for speakers but we would not get the breadth of topics we get from guest speakers.

We are receiving suggestions from members on how to improve our situation so if you have any thoughts please let us know.

We have also been in touch with many clubs in the area to see what we can learn from their way of operating and will summarize all of that information along with the Board's conclusions at our August meeting.

On a lighter topic here is a short story on my recent purchase of wooden shelving.

I make most of the wooden stands, etc. my wife needs for her studio but recently when she needed more shelving we went to check out IKEA first. They had this range of solid pine storage shelving where the 35in x 20in shelves, complete with all clips were $10 each, the 60in tall side pieces, each with 60 off 1/4in holes drilled into them to hold the shelves were $12 each, we went wild on about $150 worth of bits and after 45 minutes assemble work she had an additional 9 shelves; the design was very clean and efficient, no additional brackets or screws, each shelve had a plastic end cap which also had an integral molded clip that held the shelf pin in transit, no cardboard box or wrapping needed, nothing to fall off and with the precision manufacture they all fitted together effortlessly and accurately. The shelves were made in Brazil – it is hard to compete with world trade, it is just the modern world we live in.

Frank Ramsay gaveled the meeting to order shortly after 6pm. Tom Gaston introduced his two brothers who are attending the meeting tonight. His brother Chris is the featured speaker.

We began the meeting with a discussion of the club's budget that was examined at the Board meeting that preceded the regular meeting. John Blackmore, the Treasurer, gave a synopsis.

The club has 54 members this year, down from 70 members in 2016. Revenue to date is $1913, expenses total $2007 and we are in deficit by $94. By the end of this year, we expect to be in deficit by $2450. The two biggest expenses are the room rental that doubled when we switched to the third Sunday and honoraria paid to guest speakers. We have $4620 in the bank, so the deficit will be covered for the year, but we must address our budget woes for the next year.

First, we will attempt to reduce our room rental charges, we. We can also consider decreasing the guest speaker honoraria fees. If we eliminate refreshments and the monthly raffle, we could save $240 for the year. On the revenue side, we can increase member dues, increase the number of members and generate revenue from BAWA weekend technical seminars or other club programs.

The Board will continue to study our options and present a budget plan to the membership at the August meeting. Any thoughts, ideas, and solutions from members are most welcome. 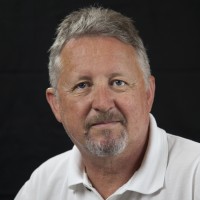 Chris Gaston works at Forestry Products Innovations (FPI), a private institute that is affiliated with the University of British Columbia and is similar in function to the United States Department Agriculture Forestry (USDA). The Institute employs 600 people and is partially funded by the Canadian provincial and federal governments. Its budget is $120 million per year. 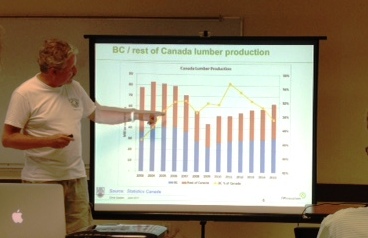 The mission of the institute is innovation to add value to raw lumber. Canada has 397 million hectares of forest, 93% of which is publicly owned. Forestry products from the deciduous forests in the east comprise mostly pulp and paper. In the west with its evergreen forests, the products are for construction and structural members.

The Institute looks to innovate in four areas:

Lodge pole pine, a primary wood in the west has been decimated in recent years by the mountain pine beetle. The consequence is a rush to harvest the dying forest while the wood is still sound. Selling wood is largely a commodity game with the raw wood. Value can be added by engineering in improved product features.

Japan is an important market for Canadian wood. They buy J grade 2 x 4 at twice the price it fetches in the US. European wood producers have been aggressively engineering new wood products and are moving into this market, however.

The United States market is heavily dependent upon US housing starts. Demand decreased significantly during the recession but is building again now. Recent trade discussion between the US and Canada, however, threaten imposition of tariffs on Canadian lumber products. 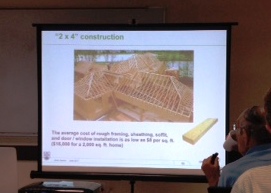 The average cost of framing timber in a 2000 square foot house today is roughly $16,000 or $8 per square foot. If the wood were pressure treated to resist termite infestation, the cost would only rise to $22,000, a cost builders in the southern US, where termites are ravenous, are not willing to incur.

But there are other ways to add value to the product. Prefabricated platform construction, multi-family dwellings, more laminates some even including steel elements and LSL-laminated strand lumber are some of the newer products coming out of Canada. Michael Green, an architect in Vancouver has designed a 6 story, and now new 14 story wood framed buildings. Companies making the Glulam products include: Structuralam, Nordic and Western Architectural. 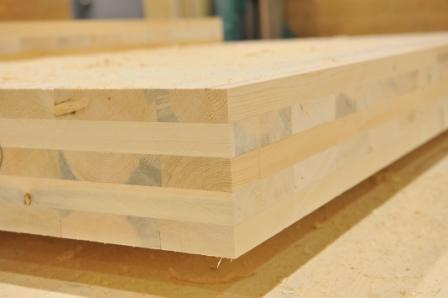 Large horizontal surfaces, principally flooring, are being made from big slabs of cross laminated timber (think of cross-hatched 2X timbers made into giant sheets of plywood) then used for the floors of a 14 story building, thereby eliminating structural steel and poured concrete. 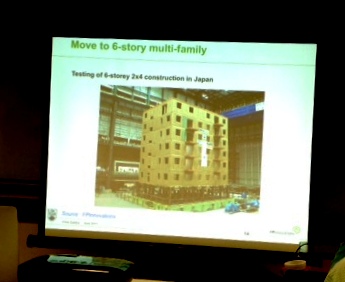 The bedevilments of an all-wood building are of course fire, and water too. And these drawbacks are being addressed. Seismically, an all-wood building can be constructed to be completely safe. Chris showed us a video of a 6-floor building constructed on a shake table in Japan. The shake table was set up to replicate the intensity of the Kobe earthquake. The building did indeed shake, but no damage was done to the structure.

Other technologies being developed include: thermally modified wood that polymerizes the resins in the wood. It is great for moisture resistance, but somehow the bugs think the wood has been treated with maple syrup. Chemically modified or acetylated wood makes things similar to TREX that can be used for non-structural components such as decking. Decking is being made with profiled surfaces for aesthetic variety.

Sustainable green products from wood include insulation, fabric and foods.

Next, Chris shifted growing seasons to talk about the social aspects of wood. The aboriginal peoples of Canada own approximately 10% of the land and legal issues concerning heritage rights may result in their greater land ownership throughout the country. In British Columbia alone there are 350 First People nations. These people have a cultural heritage tied to the forests, a heritage being gradually lost. Chris founded a First People project to join this cultural wood heritage to modern wood technologies. 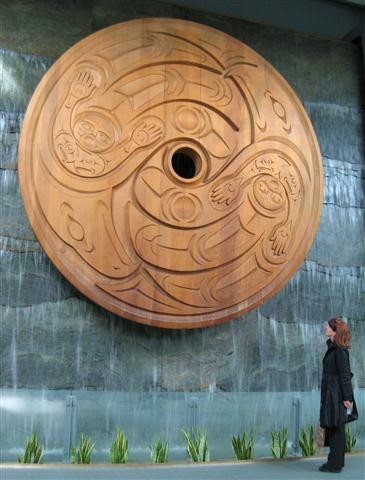 Susan B Point, a First Person wood carver, made a large spherical carving in yellow cedar for the airport in Vancouver. She used hand tools and the carving techniques of making traditional aboriginal doors. It is valued at over $700,000.

Bella C Nlack, at Emily Carr University, took applications for 10 starting young, but experienced carvers. The students were given door sized western red cedar slabs fabricated by the FPI. The assignment: using traditional tools, techniques and designs, come up with an original design and carve a door panel. It took the students two months to complete the task. The best door sold for $30,000, the lowest went for $10,000. The project generated considerable public interest and publicity.

The challenge was to introduce technology to the process so that a commercially affordable product could be made. The FPI scanned the doors so that the design could be digitized. Then, FPI made up additional cedar door panels. The panels were placed on a CNC router table and basic design of each original door panel was reproduced by CNC milling, but not in the intricate detail achieved in hand carving. Then the machine carved door panels were given to a new group of apprentice carvers to complete so as to replicate the original intricate hand detail. It took the apprentice wood carvers just two weeks to make their doors. The door copies sold for $3,000 to $10,000. The doors have been shown extensively in Canada and at the Japan Home Show and the BAV in Germany 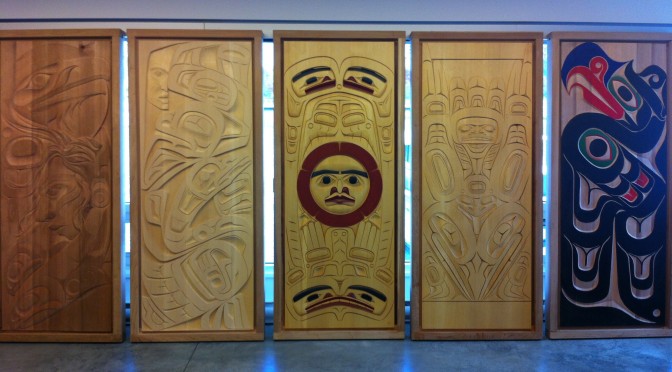 Chris estimates that the raw door panel price could be reduced from $1,000 to $200 in quantity. The Simonies nation is preparing to buy and operate its own CNC milling machine to make carved doors.

The project clearly established that there is strong demand for wood products made using the cultural richness of the First Peoples and that technology can be brought to the nations to enhance their commercial opportunities and skills.

This was a great presentation, Chris. Fascinating. Where can I get a door? 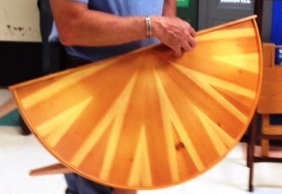 Tom Gaston showed his de mi-lune table with its radial pattern of Douglas fir on the top. The bent apron has through kerfs cut to accept the legs. 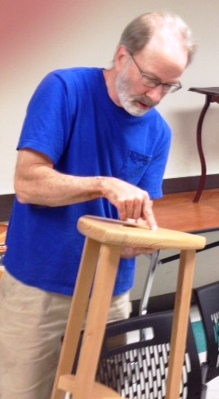 Jamie Buxton brought in his triangular stool with a center hole in the seat. Splines hold the three sections of the seat together. The radial shelf separates the legs. 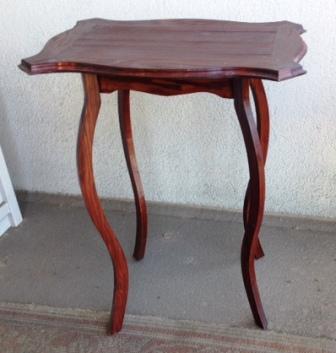 Frank Ramsay showed 2 x 4 variation of his rosewood table with band sawn, curved legs. The design is based on a Glasgow table from the last century. 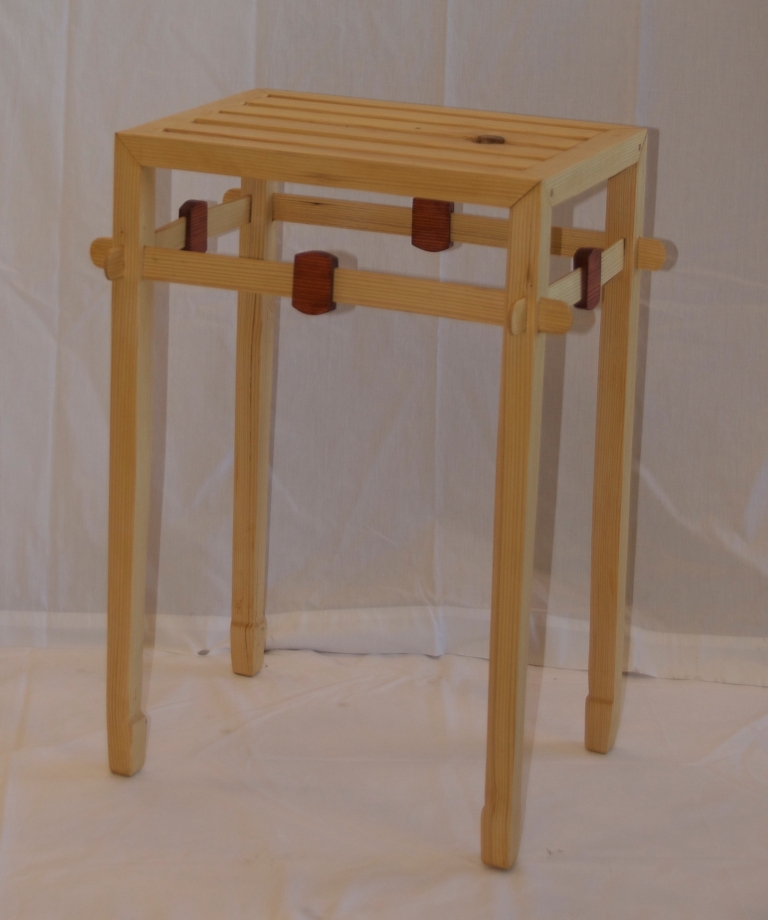 Frank's second piece was a craftsman style table with Chinese miter joints holding the legs to the seat. 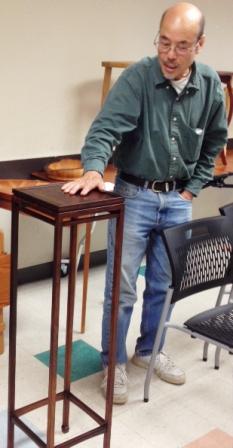 Yueng Chan made a plant stand in the Chinese style but took the liberty of making it out of a rosewood 2 x 4, also using the 3-way miter joint. 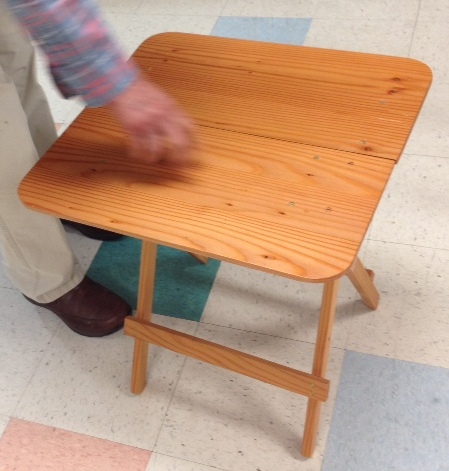 John Wilson had made a folding TV table.

Thank you for the Show and Tellers. You've given us incentive to visit Home Depot and get that perfect quarter sawn 2 x 4 for the contest in August.

With that as a finale, the meeting was adjourned.