At our last meeting Stan bought in some old issues of Workbench magazine from the 1960s. They make interesting reading although the woodwork projects seem very basic compared with what we see in our magazines today. For example:

There were a few more complex projects:

Building a patio roof, a folding pontoon boat, or a "Gothic" coffee table (plywood). One article was on making a set of pine draws which might still be acceptable today.

There were a few how-to articles such as marquetry using plywood or repairing a stair railing. 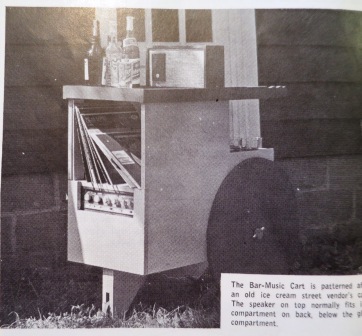 My favorite was the portable Hi-Fi cart complete with a few liquor bottles. Today it would be an iPhone, but without the bottles.

Also making a transistor radio - which was very advanced for the day. Although some things have not changed; there was an article on how to use Shellac which is the topic of our next meeting.

In the magazine there was always a Women's page (in those days women were always regarded as different from men):

Build a workbench for the lady carpenter (difference?)

My favorites were the advertisements that were dominated by pitches on how to make money:

" Mulit-Duty Belsaw - a Money making Power Tool for only $30 down".

"New Rubber Stamp Business Pays Beginners up to $9.20 an hour"

"Money to be made in th ornamental concrete business"

No wonder our colleagues of the 60s generation are so rich today – with a little bit of extra effort they could make their fortunes.

Of course it also was before the age of truth-in-advertising.

If any members ever tried any of these schemes we would love to hear your story - a Show and Tell of the past.

It is fun looking back to how it used to be – but I prefer life today when we all have access to good power and hand tools. They are no longer so cost prohibitive to be only in in the domain of the professionals.

The meeting was called to order by President Frank Ramsay at 7 PM.

In Per's absence, Frank described the schedule of upcoming events.

In July we will have a talk from Ron Ashby of shellac.net who will talk about shellac and is willing to offer consultation on shellac problems at the meeting.

In August the speaker will be Mark Christiansen from Wooden Windows at their factory in Oakland.

In September the speaker will be Dean Santner of Navigator Systems who will talk about the wood shops at Alameda Point. Details are on the website at http://www.bayareawoodworkers.org/BAWA6Calendar.html

On June 28 members are invited to the Schoenstein Organ Company factory to view a newly completed organ that will be shipping soon.

Financial Report: John Blackmore provided a report on the financial condition of the club. Our annual expected income is $2300, we have 61 members. Yearly expenditures are budgeted at $2704, we have $4625 in our checking account and $2704 in our savings account.Announcements: Frank has received a job announcement from Rachel at Creative Wood in Oakland. They are looking for a professional woodworker to build high-end office furniture. Contact Frank for details. Dan Goodman could not attend tonight so the report on the Rebuilding Together project will be postponed to next meeting.

Scott Wynn is offering to teach several classes depending on member interest. Subjects include design clinics, design exercises, handplane troubleshooting, workshop to build a wooden jackplane, and building a shooting board using sliding dovetails. John Blackmore will be soliciting input from members on their preferences.

Bill Henzel has pdfs of all old BAWA newsletters. Frank will add them to the website.

Habitat for Humanity has requested help from us to build a sales counter in their new store. The project involves cutting up large sheet goods according to a design by an architect and needs to be completed by the middle of August. John Blackmore and Frank Ramsay are soliciting input from members who are willing to allow the use of their shops to build parts of the project. At the moment only an assembly drawing exists and no solid information about the materials to be used. The short time scale is a major problem.

Stan Booker described the 16" wide oak board and the piece of figured maple to be raffled off when the pot reaches $100. Stan also talked about an article by Ron Goldman in Woodworker West in 2006, which pointed out that woodworkers have great longevity. Sam Maloof was still working at age 90, Tage Frid at 89, James Krenov at 85, Erik Sodergren at 85, Bob Stocksdale at 90, Ed Moltrop at 86, Dale Nighe at 84 as well as club members Bob Hulgan, Glen Carruth, and Bob Berryman who lived long productive woodworking lives. 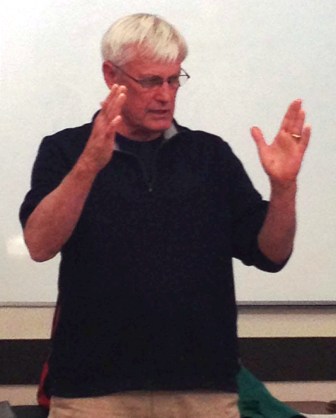 Our guest speaker, Alan Olsen, from the Educational Tall Ship program on Marinship Drive in Sausalito was introduced by Frank.

Alan has built and sailed boats for many years. Work at the Tall Ships site goes on 6 days a week and is staffed mostly by volunteers. They have several large wood forming machines left over from historical boat building programs including a band saw built in 1938 to build sub chasers and mine sweepers for the government. The saw table remains flat while the blade can tilt +/-45 degrees, even while it is running. This allows the saw to cut the varying curves of a long ship's planks. They also have a 12" jointer and a large drill press. They do re-sawing to create the over 30 miles of flitches for creating bent laminations, which are glued with epoxy.

Their present working vessel is "Call of the Sea", which is used to take 5000 kids out on the water every year for coastal voyages, public sails, teen voyages up and down the coast to as far as Mexico. There are over a million kids in the greater Bay Area and only 4% of them have ever been out on the water. 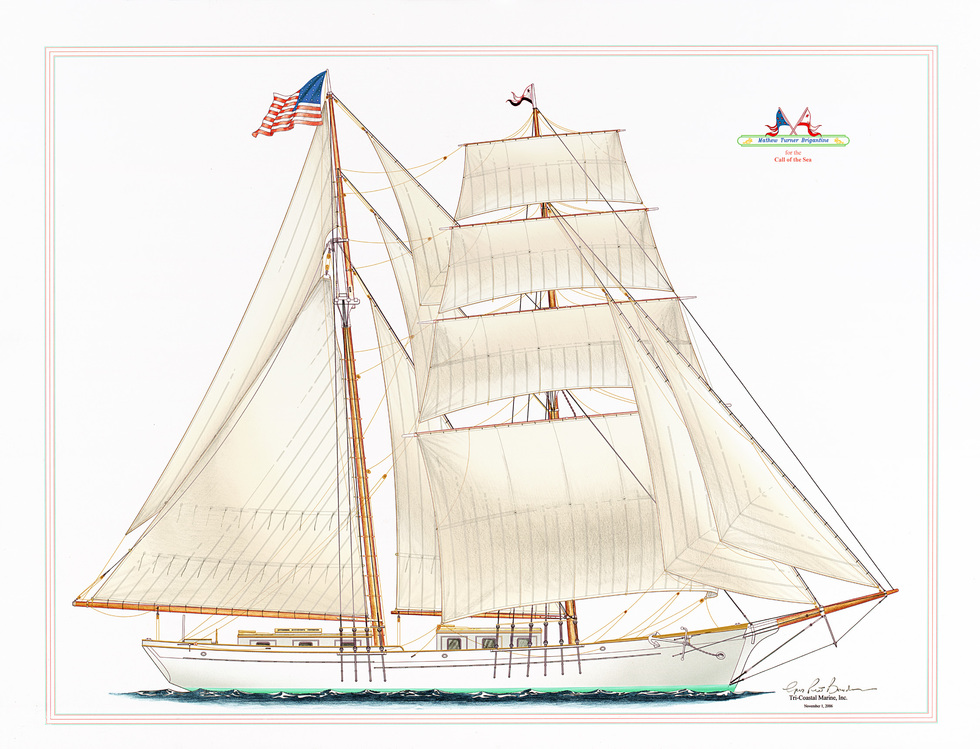 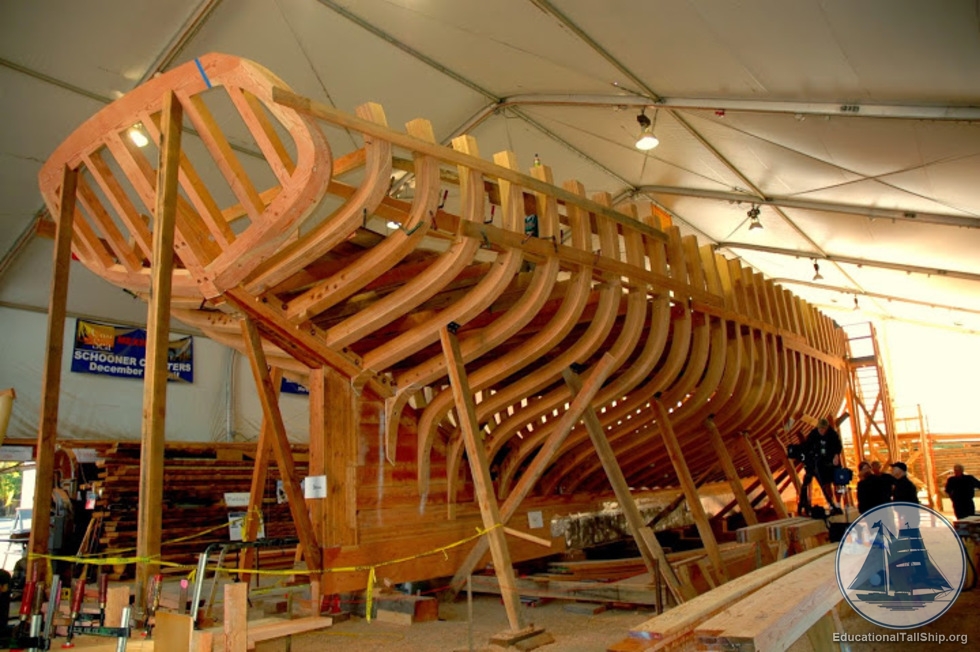 The new ship that they are building is called the "Matthew Turner". It is a wooden ship with wooden decks and spars and will allow them to expand their program further. It will be 100 feet long on deck, and 132 feet overall and weigh 175 tons. It has metal floors and uses bronze fastenings to hold the boards together. Most of the lumber was donated by the Conservation Fund of Big River and is mostly Douglas fir and some white oak. The 44-ton lead keel was cast onsite using plywood molds. The keel itself was built at a commercial gluelam factory and is 84' long. It will have 38 bunks and a crew of 8-10 and carry up to 80 people for day sailing. It will use a novel hybrid propulsion system as backup for the sails consisting batteries which can be charged by solar panels and propulsion electric motors which can be run backwards to charge the batteries as well and a biodiesel engine with a 1000 gallon fuel tank. It is named after Matthew Turner who came to the Bay Area from Ohio to look for gold and decided to get into shipping to bring goods into the area. He built over 200 ships at a rate of 1/month at the peak, including the Lurline, which made the trip to Hawaii in 86 hours, a record that stood for many years. It was the first ship of the Matson line. The design of the Turner is based on the Galilee which was built in Benicia in 1891. 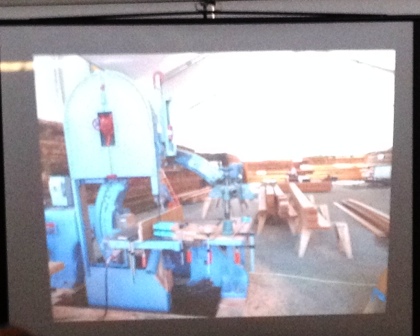 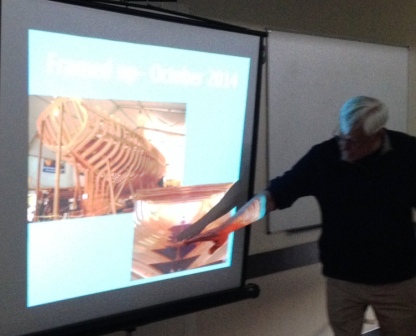 The ship is being built under a 140' x 60' tent with locked shipping containers being used for tool storage. The project's cost is pegged at $6.2M of which 75% is already in hand. At present they are beginning the planking. There are 235 planks of which 35 have been done so far. The planks are 3" thick and are steam bent. The planks are steamed for 3 hours and must be bent and fastened into place within 15 minutes of coming out of the steam box. The boat finish will be acrylic, the lines and sails will be dacron.

For more information on the ship: educationaltallship.org

Arnie Champagne then demonstrated his patent pending back roller design which he claims can cure L4/5 disc problems. 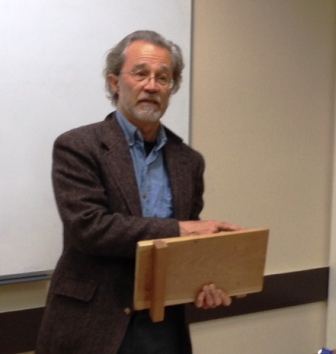 Scott Wynn then talked briefly about the classes he is proposing to teach. Costs will depend to some extent on the number of attendees. 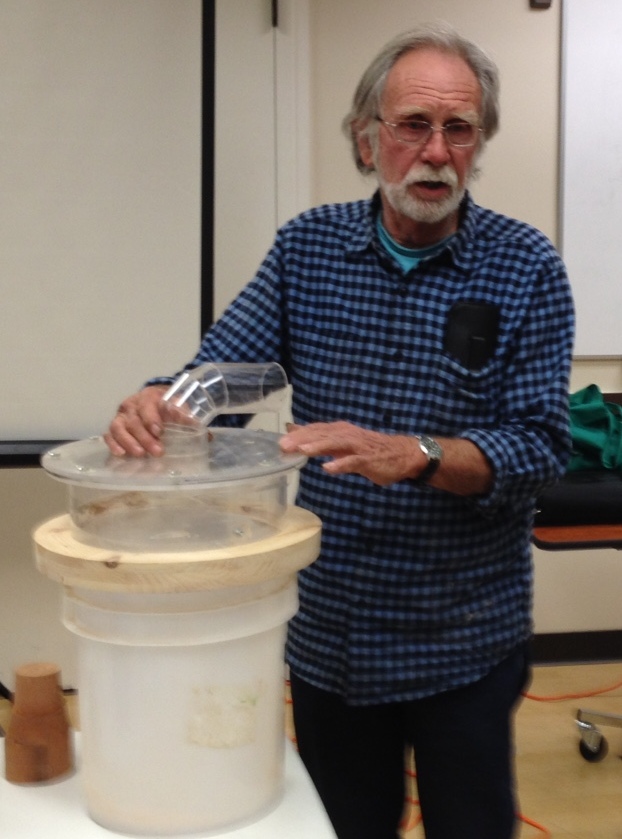 Frank Taylor showed off his dust collector cyclone and described how mesmerizing it is to watch the dust settle out on the interior plate and fall quietly to the bottom of the container. Very little dust now gets into his shop vac.

Steve Rosenblum than asked about the working time of Titebond Extend Glue. No information on this is on the label. Arnie suggesting trying out a test gluing to determine it. John Blackmore suggested adding a bit of water to the glue to slow the set further. The Titebond website claims 10-15 minutes.

Stan closed out the meeting with the raffling of door prizes.