Looking back over our meetings in 2018 we had an interesting group of speakers who not only kept our interest but also taught us more about our craft.

Mark Harpainter on the wood-art conservatory work he has done including restoration of furniture in the US State Department building and the White House.

Michael Wallace on the history of Mid-Century Modern Furniture:

Patrick Edwards ont an intricate 18c style circular table top he had made containing over 6000 pieces of veneer and his Treasure Box series that used over 50 different species of wood.

Larry White on his 27 years working with Sam Maloof and his own art.

We also had knowledge how-to presentations:

Mark Tindley on making a Greene and Greene style table starting with a Sketch-up plan to create all of the templates.

Chris Weiss gave a very detailed presentation on the how to find and work with live-edge slabs.

Members talked about the creation of some of their own work including:

Bruce Powell on his "extreme steam bending and coopering" needed to build a corner China cabinet.

Aaron Blohowiak: presented a Show and Tell on the build process of his Maloof-style rocker.

It was also the year of our 6th Biennial Fine Woodworking Show where we displayed nearly 50 works.

The shows take a tremendous amount of effort from our members to make a success but are a good way of showing our work in public and maybe peeking someone's interest in woodwork.

As a follow-up one of our judges, John Lavine, gave his post-show critique of the entries. These reviews are always very informative, but not necessarily flattering, when you have your design, execution and finish taken apart and analyzed by a professional.

On the back of the February 2019 Fine Woodworking is a picture of a cabinet made by Ottawa based furniture maker Christopher Solar for the Canadian Ambassadors Residence in Hanoi. The doors are veneered with a repeating pattern of identical pentagons sections of strong grained walnut.

It turns out that the mathematics behind identical pentagons that can be repeated infinitely is very complex. The problem is defining which shapes "tile" the plane, locking together with copies of themselves in endless patterns called tessellations. It is a problem has fascinated mathematicians since ancient Greek times that was finaly proven by Marjorie Rice (1923 - 2017).

Born in Florida, she had only had a High School education, became a housewife and a self-taught mathamatician who read about tiling in Scientific American and went on to discovered 60 distinct tessellations in the 70s.

This drawing was in an article about her and i realised I have used the ratio of the sides of the tile on the right many times for the legs of hexagonal tables. I worked out the #1 sides easily as I was constrained to needing two angles at 90 degree and two at 60 degree on a pentagon. The width of the legs and top bars were always the equal at 1.25in or 2in etc. The 5th side was just cut straight across – I never knew it was a square root of the other side which is probably as well as I do not think I would have been able to mark it out at (√ 3 -1) 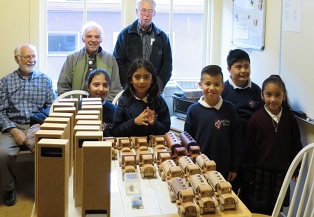 At our Toy Workshops members make wooden toys for local children in need.

For many years our Toy Workshops have been chaired by Harold Paterson who this year left the Bay Area for the East Coast so we are very grateful to Harry Filer taking over the reins. Frank Taylor still remains as the master toy designer and this year the workshops produced large supply of flatbed trucks and gas tankers.

Recently I had the honor of going with Harry and Ed Schoenstein the St. Francis Center on Buckingham Ave. in Redwood City to present a batch of the toys for the children, earlier in the week they had a similar visit to The Janet Pomeroy Center on Skyland Blvd., San Francisco.

The BAWA crowd welcomed the holiday spirits with counters full of gourmet snacks and desserts. Oh, where to begin? Should Frank call the meeting to order, or just open the snack counters. But there was a problem. No one thought to bring eating utensils and paper plates. Mike Tracey, a local Foster City resident, quickly volunteered to run to the local store for supplies. The hungry would have to wait. Frank called the meeting to order at just after 6pm and the guests were introduced.

Teo and his dad, Itiene, stood to join us.

John Hemmingway needs a box maker for some exotic wood he has collected. Just a coincidence that tonight is the box contest.

John Blackmore, explained will be a sharpening session. Four sharpening systems will be presented: LapSharp, WorkSharp, water stones and diamond abrasives. Members are encouraged to bring their blades in for sharpening. Come on everyone, hone your edges.

(By now the utensils and plates had arrived. The congregation sprang from their seats and rushed the hors de oeuvres.) 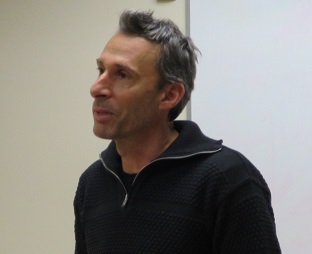 Frank Ramsay introduced our featured speaker. Chris Weiss has presented to BAWA in the past, talking about Japanese woodworking techniques and designs

With an Alaska mill and numerous contacts in the tree community, and with local arborists, Chris has collected a warehouse full of wood slabs, favoring Black Acacia, Bay Laurel (Myrtle) and Walnut. He uses his hoard while designing and building commissioned furniture. Tonight he will talk to us about working with slabs.

Freshly cut slabs generally have a moisture content in excess of 35%. The wood needs to be dried to a level of 10-15% before it can be worked. You can make a kiln using a heater, a dehumidifier, a fan and then wrap the wood with a tarp. You can microwave smaller pieces of wood. But, be careful. It is easy to disrupt the cell structure in a microwave. He prefers to air dry the wood, stacking the slabs and separating the layers with slats to allow for air movement.

Insects prefer the sapwood, usually while still wet, but will infest dry wood too. To reduce the risk of infestation, strip off the bark, cut away any affected sapwood and treat infested areas with a Borax solution. Tom Gaston recommends Bora-Care, a boric acid solution available on Amazon.

Avoid slabs that are cut to include the tree core or pith area. It is too prone to checking and cracking. He book matches adjoining flitches by flipping the grain, one up, one down. He likes a natural edge and uses a wire brush to clean and maintain the natural look. He repairs cracks with epoxy resins. Most slabs are cut to 8/4 thickness, but larger ones can be cut to 3 ½ to 4 inches thick.

Chris has a 20-inch jointer he uses to flatten one side of each slab. Alternatively, it is possible to use winding sticks and flatten with hand or power planes. He has also used a planing table to flatten one side. A router mounted to a carriage runs back and forth between two side rails. The newest method is to take your slab to a shop that has a CNC mill. Claude Godcharles has one at the Palo Alto Adult School. Check with Claude for charges.

After you have flattened one side, let the slab relax for a while. It will change shape. Then flatten both sides with equal material removal.

Generally he creates straight edges to be joined and inserts biscuits at spaced intervals. He has started to use Gorilla glue and rarely uses epoxy. Clamps are placed along the edges with blocks.

His rule of thumb is to make the base width one-half the width of the slab. He uses metal in some of his bases.

He uses a jig to cut the butterfly on a table saw or chop saw. The depth is tapered. Edges are cleaned up with a chisel. He uses a Forstner bit to remove most of the wood in the defect area of the slab. He uses a router free handed to remove to the line of the intended butterfly. It is not necessary to have full depth butterflies.

He uses the West epoxy system to fill cracks.

Chris thinks less finish is better. He likes to see the patina develop with aging. Where water and alcohol are a danger, he uses a wipe-on polyurethane finish. There are good water based polys available. His preferred finish is a tung oil made by Sutherland Wells. For outdoor finishes he uses Daly's Outdoor or ship and shore teak oil. Varnish will show scratches and he dislikes lacquers.

He recommends Jacklyn Enterprises in Watsonville as a good source for slabs.

Thanks to Chris for a most informative presentation.


The Box Contest was held before our Guest Speaker to give members time to contemplate the weight of their heavy decisions before voting later in the meeting.

Dennis Yamamoto presented the Claro Walnut and Maple cabinet box he made at a summer session at the Krenov School. 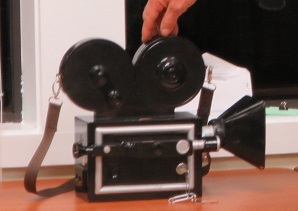 Frank Taylor, with his cinema graphic background, had a hand held movie camera right out of Hollywood. 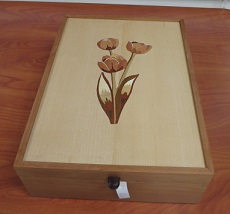 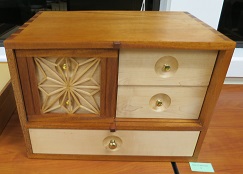 Ken Napior duplicated a cabinet box that had been featured in Fine Woodworking with delicate scroll lattice work.

Harry Filer got to the root of things with his box. The top was made from Redwood root stock salvaged from under his house.

John Wilson showed two boxes, one a bandsaw cutting and the other with a beautiful marquetry inlay. 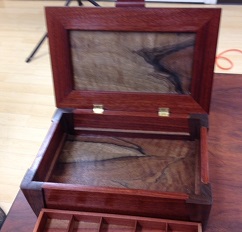 John Blackmore showed two boxes, but we have only 1 picture. Both were made with locking miter joints at the corners, one of Bastogne Walnut, the other of Macacuada.

See some of the action at our December meeting when we had a box making challenge on the Youtube video by Burt Rosenweig.

A Blast From The Past


(or A scraping of BAWA history)

The December Christmas pot luck was another huge success. The club splurged and rented the facility at the Alliance Francaise for the occasion. Members were asked to bring a dish to feed 8-10 people or pay $5 at the door.

The January issue also included highlights of the previous year. It is noteworthy that meetings were held at various locations every month, including members' shops, a vocational education classroom, and a number of local woodworking-related businesses. Several of the meeting hosts also provided meals for the group! There was discussion of plans for a golf tournament and baseball tailgate parties. And our old friend Woody Woodward appeared prominently in many of the meetings. BAWA had booths at local woodworking tool shows in March and October of 1988. These were seen as great ways to attract new members.

Great progress was made building the new Larkin Street Youth Center. Listed among the volunteers on the project is our good friend Arnie Champagne. A schedule was published for work to be completed every weekend for the next month.

This issue of the newsletter included the first in what was to be a regular series of articles by Peter Good about his mostly weekend travels around the country teaching seminars at woodworking shows and associations. In addition to his list of travel hassles he notes the regional differences in woodworkers. He says California woodworkers are diverse, innovative and entrepreneurial, while those in New England tend to be more conservative, traditional and introverted. Heartland woodworkers produce things which are practical durable and time-tested, and those in the Southwest are strongly influenced by Mexican and Native American designs.

And finally, Norma Brooks relented to staying on as Newsletter Editor, since no one else volunteered to take the job. 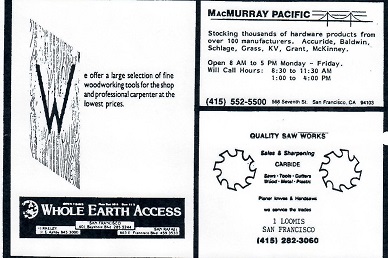 Note: The newsletters pages were scattered with ads which were provided revenue to help fund the postage etc.