The start of a New Year and time once more for all those resolutions to make the things you did not quite get around to last year…….but are you going to challenge yourself to do anything different this year? To improve your design skills? Or cut dovetails that are more delicate than you normally use? Or get that extra level of mirror finish on the next table?

I think my biggest wish would be to have the time to make everything 3 times. The first time I make something it is almost OK but there are always some little things that I know could be a bit improved. The second time I can get it right…but I usually still have some reservations about what I could have done better. By the third time I make it I can get it totally right – well not quite as there are still always some things I see in my work that I know I need to improve on but it is passable. If I only could made the same thing over and over again it might asymptotically approach perfection but I would never get there as the implementation of the project would still be subject to random errors, or random operator mistakes.

Sometimes I think the more I learn about woodworking the more difficult it becomes. Before I was involved in BAWA I would make a small table, simply varnish it and be satisfied. Now I start a project with a lot more accumulated knowledge than before. For example if I am finishing a project I know what grade sand paper to use, that I should seal the wood with de-waxed shellac, that I should use grain filler on open grain woods, that I need build up the level of finish with many coats then rub it down with wool-lube. So the simple one step process of finishing a project has become a 6-step process. Therefore I have a 6x greater chance to get it wrong. It starts to make sense that old-style apprenticeships took so many years.

If we are challenging ourselves, then we will always be in this state of pushing to the next level and making a mess of it on the way then after a year or so, the next level becomes the norm and then we are pushing for yet another next level.

A New Year is a good time to start focusing on the next level.

I wish you a very Happy New Year and that all of your projects turn out to be successful.

The halls were decked with mounds of scrumptious hors d'oeuvres, the crowd uttered murmurs of hunger and the pain of incipient starvation. Not to be restrained, the throng advanced, politely at first, then with conviction to some of the prized offerings. Tom Gaston presented salumi of elk from Alaska made by a hunter friend who works on the North Slope. Harold Patterson's pumpkin pie was still warm from the oven. The Hello Dolly bars by John Blackmore promised to over sugar all that partook. Per Madsen, true to character as always, brought in his Danish butter cookies. But Fred Reicher and his secret recipe cookies were not to be found. The feast was memorable, vastly appreciated by all. Plates were filled and the crowd seated so that Frank could call the meeting to order right on time.

The meeting was called to order by President Frank Ramsay at 7 PM. Guests introduced themselves:

Mark Slapkis, a member of Diablo Valley Woodworkers and Ann

Kim came as a guest, having been introduced to the club by Claude Godcharles who found her wandering the isles of Woodcraft. Kim brought in some of her wooden boxes that will be described under the Show & Tell discussion. 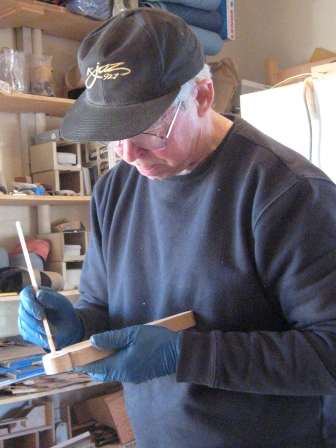 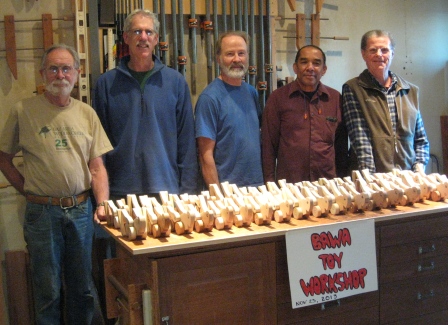 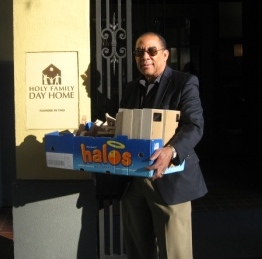 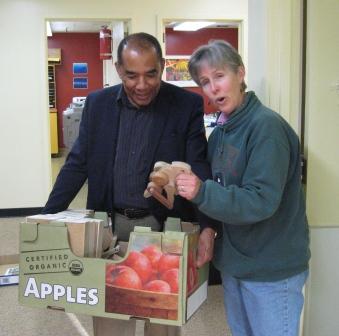 Harold Patterson completed his series of Toy Workshops held at the shop of Jamie Buxton. The group completed 30 periscopes, 36 crickets and 5 aircraft. These toys are going to make for some very happy kids this Christmas.

Stan Booker still has tickets to sell for the beautiful cherry board (14" x 9'). It will probably go in January. He will pull four door prize tickets tonight.

Per Madsen previewed the programs for the first three months of 2014:

We have tentatively scheduled a visit to the Facebook shop on Feb. 8: Details and confirmation to follow.

John Blackmore will present information about the planned quarterly technical seminars in January.

Arnold Champagne has tools for sale that he will put into the BAWA Classifieds, including a Delta shaper, a Hawke scroll saw and two horizontal mortisers.

Bill Henzel having upgraded to a MinMax 16" jointer/planer, has an 8" Delta jointer for sale.

Claude Godcharles began touting the Bi-Annual Wood Show that BAWA will hold next October. He encouraged everyone to start working on submissions as soon as possible. Time flies. He also brought in persimmons from his tree. Hope everyone got to try the persimmon bars.

Frank Ramsay reminded everyone that annual membership dues are due now.

The secondary purpose of the meeting tonight was to feature the works of the BAWA members. 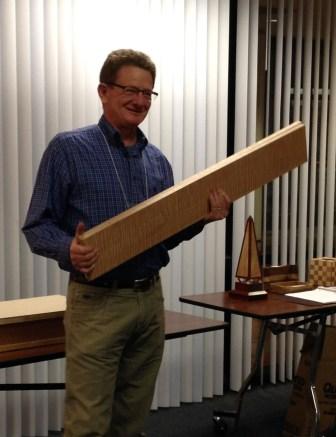 In August John Blackmore had brought in two 1" thick boards he had re-sawn from a 2" board that had cupped as he cut them, created an arc with a height of 1" in the center of each board. In spite of the interesting and attractive tiger pattern in the maple, most members thought the boards would be best suited for veneers. But, John had been inspired by John Shelly from UC Berkeley that wood behaves this way if it is overly dried in a kiln. John took his curved boards and immersed them in a full bathtub for three weeks, then removed them and clamped and stickered them to a rigid, flat backbone made of 2 x 12 Douglas fir. Left to dry for two months, the boards were removed and pronounced flatter with an arc of only ¼". Still best suited for veneers was the consensus judgment. Nice try though, John. 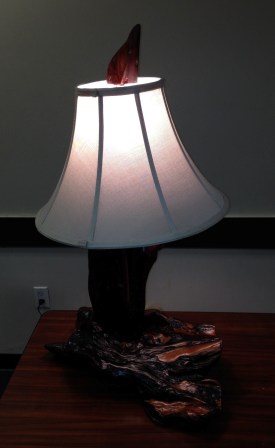 Harry Filer displayed a beautiful redwood lamp created from the natural shape of a redwood root. Harry's family owns an old cabin at Camp Meeker that was built in 1909. While renovating the cabin and installing a real foundation, he found and salvaged most of the stump and roots of an ancient redwood tree. He has been using sections of the root to create several lamp bodies. The chosen rootstock in cleaned with steel wool, and lots of elbow grease, then finished with Deft oil, making truly elegant lamps. 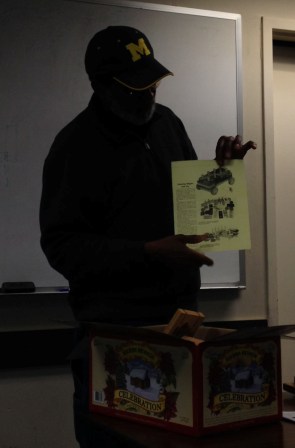 Stan Booker has been making wooden toys and his most recent is a road scraper. It needs wheels and he has tried several methods, fly cutters and hole saws. His favorite, however, involves shaping several wheels at a time on a lathe. He makes a center hole at the drill press, rough cuts the round shape on a band saw, then mounts 4 wheels at a time on a fixture he has devised and cuts the wheels to final specification. 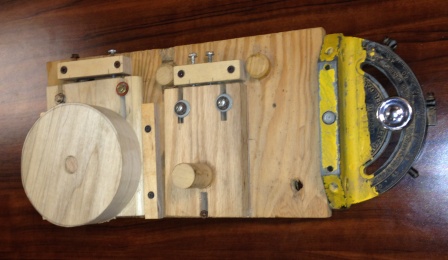 He even puts treads on each wheel. Frank Taylor, take notice. 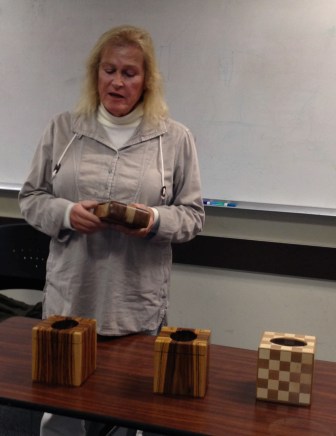 Kim joined us as a guest, and showed us her very elegant boxes. She learned how to cut crown molding on a compound miter saw and thought she could use this knowledge to make interesting boxes. Her pillow box is made of claro walnut and oak with rabbeted joints and a floating bottom. The top is hinged with concealed brass pins. The Kleenex boxes are made of face and edge grain squares in a checkerboard pattern. She finishes the boxes with Watco Danish oil. 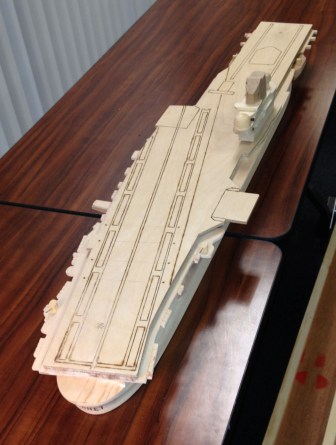 Frank Taylor, amazing many of us over the years, has made wooden motorcycles and V-8 engines in about ¼ scale. Having been inspired by a sleepover visit with his 7 year old nephew to the USS Hornet in Alameda, Frank made the ship in wood as a surprise Christmas present for the boy. While smaller than ¼ scale, perhaps only so that he could bring it to the BAWA meeting, it is authentic in all details. Plane elevators, jet blast deflectors, angled deck, gun placements, AirOps station—no detail was missed. The ship is packaged in its own crate, also made by Frank. Extraordinary.


Frank Ramsay edified us with his obelisk made of padauk and maple. The maple is veneered onto a hard, shaped core of plywood with the angled paduak edges converging into the pointed spire at the top. The base is made of paduak as well and supports the obelisk on four small pyramids of maple at each corner of the obelisk. He showed the piece at SF Open Studios and sold it from the Main Gallery exhibit. Bruce Powell and Scott Wynn also showed their work here and sold it as well. Could it be that fine woodworking pieces are gaining recognition as art? 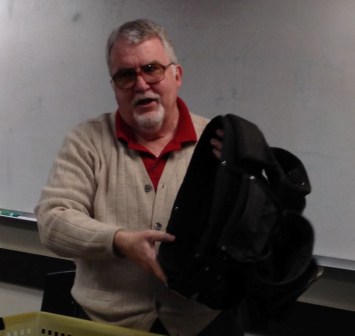 Ray Burger decided that as it was the giving season plus people in all sorts of life were being presented with historic artifacts that he should present Arnie Champagne's historic tool belt back to him as a memento of all the great times Arnie had while wearing it. (The same tool belt that Arnie had donated to the meeting as a silent auction item last month as he wanted to be done with it. Which goes to show that in the short time of only a month a "want to get rid of" item can become historic and come back to haunt you)


The meeting concluded early so that members could re-assault the feast offerings and satisfy their lingering hunger cravings.

It was a great year everyone. Thanks for making it memorable.