My introduction to gluing was at the age of 11 when I made my first project in the school woodworking class. It was an egg rack: 0.5in thick top with six holes in it to hold the eggs and 2 butt jointed supports underneath. The supports were glued in place with hide glue liberally brushed on from the glue pot, always hot sitting on its small gas burner, at the side of the room. This pot also introduced me to the wonderful smell of a woodworking shop - a memory of the past.

For the next 40 years most of my gluing was using contact cement for Formica kitchen tops etc with the occasional use of Casco casein glue for wood projects (Vintage empty cans now available on ETSY for $15).

At our December meeting Chris Wiess mentioned that you only need glue one edge when gluing two live-edge slabs together - I stored the thought for further investigation.

After the age of 11 nobody had ever told me how to glue up correctly!

The meeting was called to order by President Frank Ramsay at 6:10 PM.

Visitors identified themselves as Paul, who moved here from San Diego, Brad Foster and Nate who are here for the first time. Lou Fox, who is an experienced woodworker. Eric, a lifelong woodworker, Maryanne, and Mateo.

Jon Kaplan announced that Larry White is holding a beginner level hands-on workshop in Rancho Cucamonga. Jon is going to attend an intermediate/advanced workshop building a small side table and asked if anyone wanted to join him.

Bruce Powell talked about the upcoming meeting on jigs and fixtures. He hopes people will bring their favorite ones in and share experiences. He expects to see examples of essential ones like table saw crosscut sleds as well as special purpose fixtures that may only be used for a single project. People may also consider swapping jigs they no longer need.

Bruce also announced the sale of a truckload of moldings that he acquired at the closing of Wooden Windows in Oakland. There are many different profiles in 8-foot lengths. They will be available from the bed of his pickup at the Foster City Rec Center at 10 AM on Saturday.

Subsequently there will be a contest to choose the best project made using these moldings. The prize will be a $25 Rockler gift certificate. (NOTE: These plans have changed and the moldings will now be available at the February BAWA meeting.)

A former member has donated a bunch of tools for sale to benefit the club. Information will be available on the website.

John Blackmore reminded us that dues of $48 are payable immediately. Financial results for 2018 show revenue of $4480 and expenses 4489.81 We had a lot of income beyond dues.

Yeung Chan announced the Krenov School is having a show of student work next month. 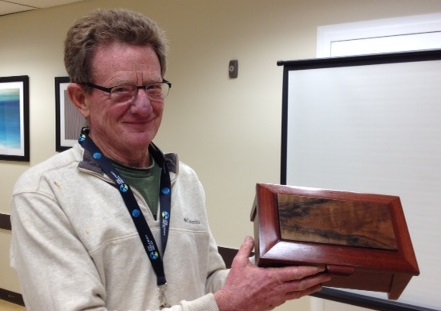 John Blackmore introduced the workshop on sharpening. Members had brought in every conceivable type of sharpening tool. 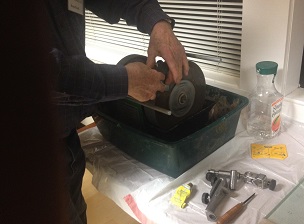 Tormek slow speed wet grinder, which puts a hollow grind on the front edge. The back of the blade needs to be flattened on a stone first; 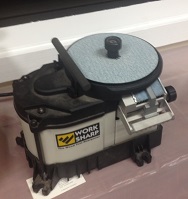 Worksharp, which can quickly flatten the back of a blade as well as sharpen the bevel at a controlled angle. Different wheel grits are exchanged from coarse to fine as sharpening proceeds. It uses flat tempered glass wheels with various grits of pressure sensitive adhesive-backed abrasive attached to them. 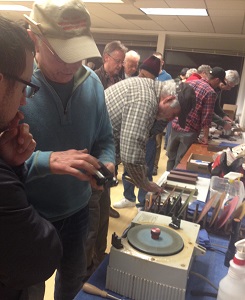 LapSharp, which is similar in style to the WorkSharp, has grits from 120 down to 1 micron. 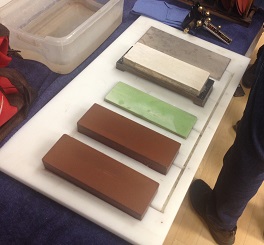 Water stones. These must be used constantly wet and flattened regularly with a flattening stone. They can provide a mirror finish with grits going down to 8000.

Diamond stones, graded from extra coarse to extra fine, must be lubricated with water or oil, but remain flat over many hours of sharpening activity as the diamond surface does not wear. Final finish is not as good as water stones. All stones can be used with a jig to maintain the proper angle during sharpening. The Veritas version was demonstrated.

Mpower Fasttrack grinding fixture. Jon Kaplan demonstrated this interesting device which can only grind a 25 and 30 degree bevel and uses small diamond stones which are swapped out as sharpening proceeds.

Yeung gave a short lecture on the principles of hollow grinding vs. flat grinding. When combining hollow grinding with a micro bevel, the time to recover a razor-sharp edge can be greatly reduced, requiring only a few strokes on an 8000 grit waterstone. Japanese chisels cannot be hollow ground because they consist of a layer of hard steel over a core of soft iron. Hollow grinding would expose the soft core material. 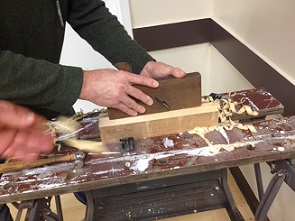 In the end the satisfaction is using the newly sharpend tool. 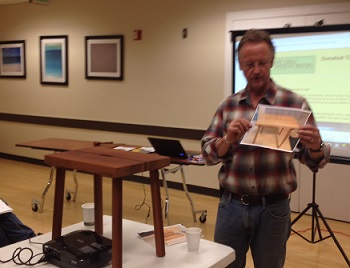 After a 10-minute break, Tom Gaston showed a makeup table with a drawer he made for a guest room in his house. The actual unit is bolted to the wall. 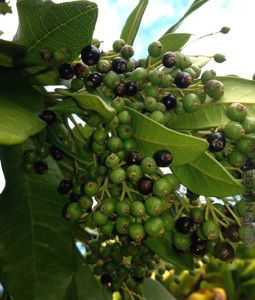 Claude Godcharles described and showed pictures of some unusual Central American trees that he saw on a recent trip: jabuticaba (Brazilian grape tree), which has its fruit growing directly on its trunk. He brought in a debarked branch to show. Another was a calabash tree (Morro tree), whose seeds are used to make horchata. Finally, a pimenta (rain forest tree), which came originally from Jamaica and is the source of allspice. The pimenta seeds need to be digested by birds in order to germinate. 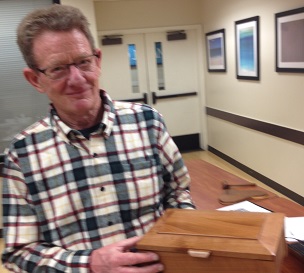 John Blackmore showed his 17th completed box, which was made of madrone.

Burt Rosenzweig showed a spaghetti gauge he made.

The meeting adjourned at 9 PM.

A Blast From The Past

Interestingly, there were no minutes from the January meeting included in the February newsletter.

It was announced that the February meeting will start earlier than usual (6:30 PM) despite traffic concerns (sound familiar?).

The president's letter this month extolled the value of participating in the upcoming San Francisco woodworking tool show. The show the previous October was a big success for the club. Benefits included attracting several new members, as well as visitors to the booth mentioning apprentice opportunities, shared shop opportunities, and people looking for craftspeople to do carving and other projects for them.

Objective: Be as creative as you possibly can utilizing a single, standard 2x4 board. Any design is acceptable.

Any type of wood may be utilized, however no mixing of woods is allowed.

The project must originate from a standard 2x4 board.

Any type(s) of adhesives may be used.

Any type(s) of fasteners (except nails) may be used.

Any type of operable/ornamental hardware may be used.

No other materials such as plexiglass or plastic laminate will be permitted – this is a "2x4 wood" project.

Judging: All entries will be judged by popular vote of the general membership in attendance at the (March) meeting.

Prizes: Prizes will be awarded for the first, second and third place entries. They will be substantial, so BAWA encourages all members to participate. Let's have some good-old-fashion sawdust fun! Note that BAWA would also like to put all the entries on display at the March woodworking tool show. So, get a-cuttin!

Peter Good published part 2 of his "On the Road" series, this time talking about the encouraging level of interest he sees in his business-focused seminars for woodworkers. He describes his own struggle to make ends meet until deciding that it's okay to be both a woodworker and a businessman and is happy to see so many others come to the same realization. He thinks it's good for the survival of the craft.

As usual, much of the page space in the newsletter was occupied by advertisements, everything from hardwood/lumber and tools/machinery suppliers to custom fabrication of corian countertops. Fees for advertising in the newsletter were included:

Seems like a nice, steady source of income! Know anyone who wants to sponsor an ad here?

Publisher's Note: In those days the BAWA Newsletter, including postage, was mostly financed by advertising. One of the rules when we incorporated into a 501(c) Association "organized exclusively for charitable, educational and scientific purposes" we became very limited in how much of our revenue can come from outside sources. 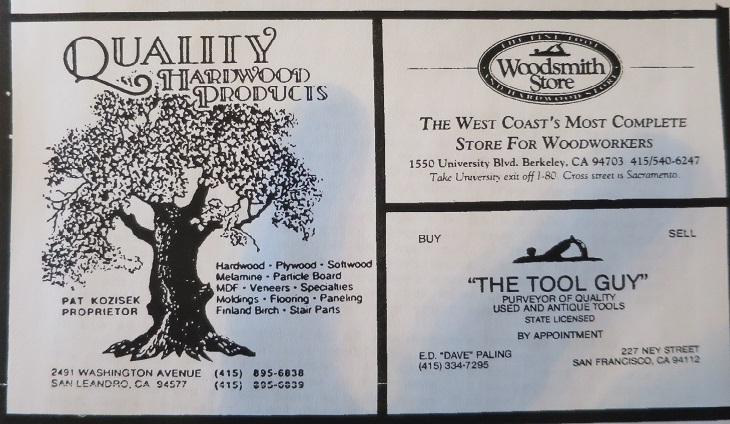 The Newsletters pages were scattered with ads which provided revenue to help fund the postage etc.