I started following a Facebook group called Unplugged Woodworkers a few months ago. The group receives so many new and interesting posts every day that come from all around the globe that I have to limit myself to only looking at a few posts per day or I would never get anything else done.

Not being too inquisitive on how people choose their group names, it never occurred to me what "Unplugged Woodworkers" meant until I had been reading for several weeks. Suddenly I realized "Unplugged" meant no power tools as opposed to woodworkers who might be a bit on the wild side or something (There are some woodworkers who tend to be a bit wild).

Looking more into the site, I find it has over 25,000 members and is self-policing, controlling the number of commercial posts it receives, etc.

It is a new fast-growing trend (or old trend, out of necessity, being revised) If you Google "Unplugged Woodworkers" you get links to dozens of sites discussing and offering advice etc. to the unplugged community.

We have at least one of our members who is unplugged, maybe more as I have never thought of asking until now. I watch his videos on making his big solid work bench, sawing, planing and fitting vises all by hand; much slower than using power tools but I am sure it gives a great feeling of satisfaction. After all when we first take up woodworking how much of our drive force is to use tools compared with our driving force to build something? I think most times we want to use tools, then have to find projects, like a new table, to focus our tool time on.

We are hoping to arrange for a speaker to talk to us on unplugged woodworking later this year.


After much discussion on changing the time of our regular meeting and polling members last month we had our first Sunday meeting, I think it was a great success. It was nice to see several people attending the meeting whom we had not seen for quite a while. Traffic on the freeways was still heavy but a lot less than the congestion on regular workday evenings.

We look forward to seeing even more of our ex-members and friends making the journey to Foster City once per month to attend our meetings.

President Frank Ramsay called the meeting to order at 6:15 PM.

This is the first of our Sunday evening meetings and members were uniformly overjoyed at the much easier traffic situation.

Among our visitors were Ralph Belton, an architect who wants to take up woodworking, Neil, who has attended a few meetings, and local woodworkers Steve and Maria.

Per Madsen is retiring as Program Director. In the interim, Mike Bray, Bruce Powell and Frank Ramsay are acting as a committee to set up programs.

February we will have Ken Fryer talk about harpsichord making.

March Stephen Bauer will talk about finishing and also a tech talk by Ken Napior on Arts and Crafts details.

Frank pointed out that the initial program has the April meeting scheduled for the 16th, which is Easter Sunday. The meeting will be shifted to the 23rd. 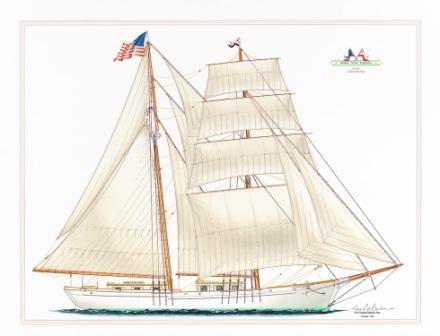 Steve Rosenblum announced a volunteer opportunity to build 12 wooden windows for the Matthew Turner Wooden Ship. Bruce Powell, Mike Bray and Mike Downing volunteered to help. Steve will pick up the materials and the drawings as soon as they are available.

John Blackmore announced a Box Making Workshop on February 4 at John's shop. People should bring their materials and plans for what they want to build.

Arnie Champagne is cleaning out his shop and has many items on Craigslist. He brought in patterns and wood to construct a rocking horse.

Frank announced that Stan Booker would be unable to attend several coming Sunday meetings so we need someone to take over the door prizes as well as the wood raffle for the next 4 months. 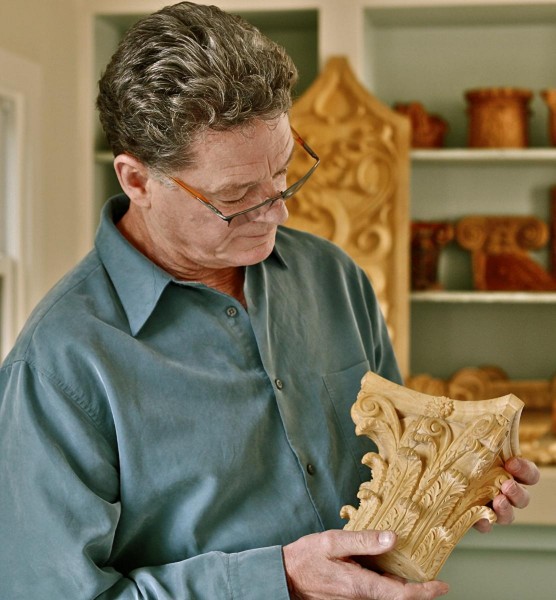 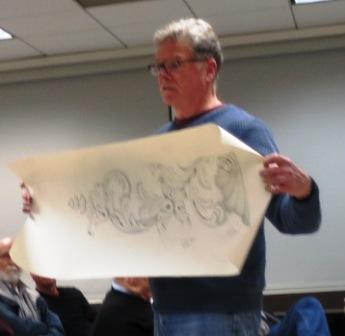 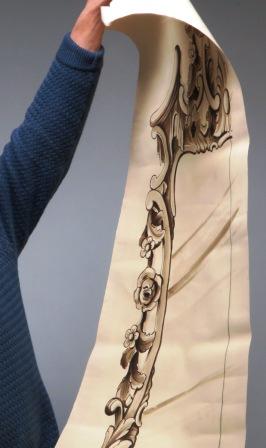 Ian's talk was both about the art of carving and as well as about how to set the activity up so it can be profitable. Ian's work is principally in architectural carvings. He gets his commissions from architects, designers, and contractors as well as homeowners. By trial and error he has come up with a model in which he can employ a large number of master carvers that can be put to work quickly to generate original carvings according to customer needs on very tight schedules, What he has found to work is to set up his factory in India and ship drawings and objects back and forth using FedEx Express. This allows him to do custom carving in large volumes at an economical labor rate of $75/hour.

If you want to learn to carve you can attend one of his classes. You can sign up on his website: agrellcarving.com

The first questions that need answering are, what is good carving, what is bad carving, what are the motivations? Ian brought many examples of things he has done. The earliest carvings were done by the Egyptians and are 4000 years old. There were peaks of carving activity during the Renaissance and Gothic periods as well as during Victorian times and during the reign of Louis XIV and XV in France. Ian considers himself an artisan or a woodworker, not an artist. He delivers work on time and expects to be paid. 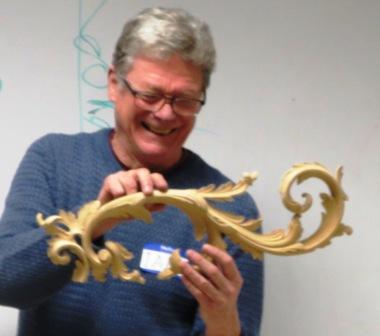 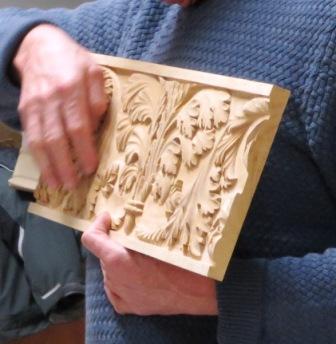 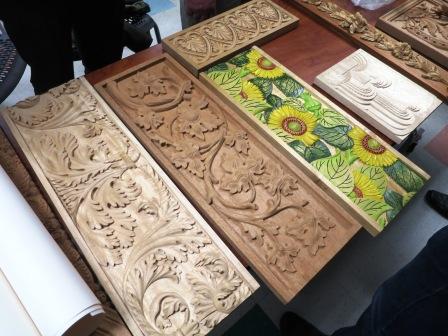 A table full of examples. 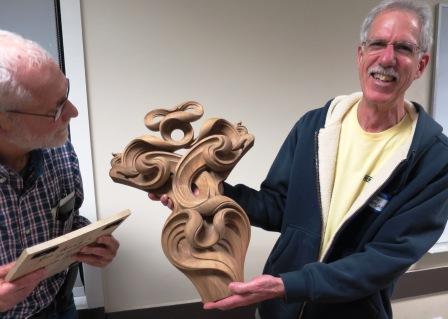 Women did all Victorian carving. After the Bauhaus movement, people no longer wanted carved decoration, but following WW II there was a lot of need for restoration of old buildings that had been destroyed, so there was a demand for carving again. During the decade 1960-1970 hippies caused a resurgence of interest in carving and thereby saved the industry. Ian started carving in 1961 as a hobby while serving in the British Army. After the army he attended the City of London Art School. Following that he moved to Denver to work and teach half time. His first big commission was the Church of the Magdalene in Salt Lake City. After leaving Denver he set up a shop in Sausalito with 12 people but was hard hit by the recession in the 1990s. The workflow was very cyclical but when work arrived the schedule was usually very short, requiring a large number of carvers to facilitate on time delivery. This is what led him to the idea of putting his factory in India where the labor costs are much lower. He has no problem hiring and retaining outstanding craftsmen there because he pays them well and treats them well. Ian does the drawings and carves prototypes and sends them to India via FedEx. They use Skype for meetings and Internet for exchanging documents and FedEx the final carvings back to the building site.

Design is the most important part of carving. If you can't draw it you can't carve it. He then showed examples of the work his factory has done. The first was a drawing of a carved fireplace surround for Fulham Palace in London. The next was a sepia drawing of an 18th century rococo mirror frame. The next was a fireplace surround for a Getty house in Mill Valley. It encompassed 3600 hours of labor and was carved in Sausalito in the style of the 17th century.

He carves mostly in gamari wood, which he purchases and dries in India. It is first stored outside until it reaches 25% moisture content. It is then stickered inside a tin roofed shed that sits out in the summer sun in Calcutta. Sometimes rough shaping is done by freehand routing, but most often only by hand carving alone.

A short history of carving styles:

1429-Gothic in Germany, mostly carved in oak, work was left rough "off the chisel" although sanding was sometimes done. 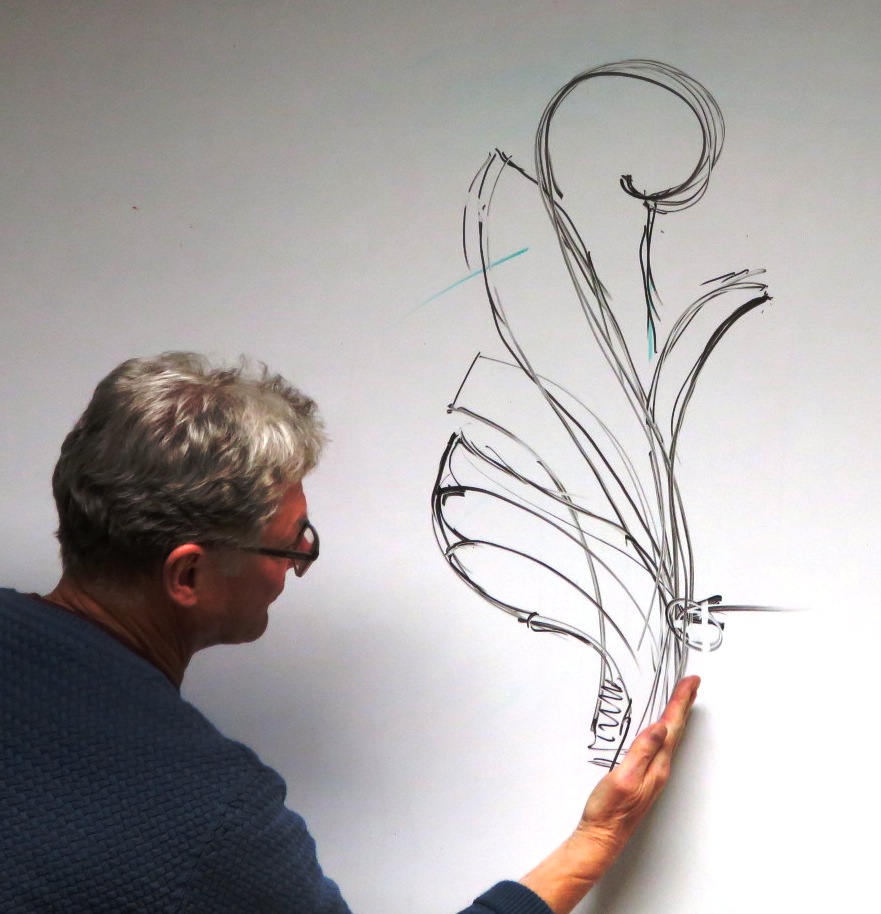 White oak is good for carving but not red oak, which is too porous. Mahogany is easier to carve than oak.

In the case of a door casing from Versailles, which was gilded, the fine details of the carving need to be left for gesso carvers. The gold is applied over the gesso.

Another important aspect of design is wit & fun. Details are included that are only obvious to carvers. Since carving is never signed these details are how carvers communicate with each other across the centuries.

There is a library of decorative carvings online at: ornapedia.org

After a 10-minute break we had show and tell. 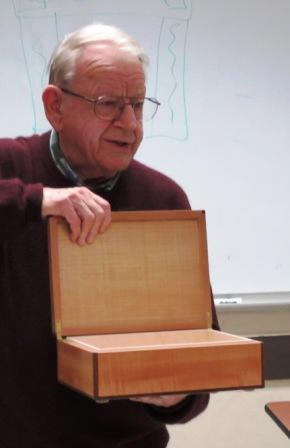 Bob Nisbett showed a tea box with a Swiss pearwood veneer top and a maple interior.

Arnie Champagne showed a cutting of a horse head done on his Hawk scroll saw, which demonstrates the ability to do tight turns. 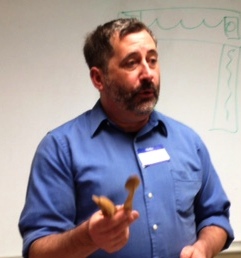