We seem to have more workshop visits and more training classes on the program this year than we have had for a long time which is great. Most of us are creative people with the desire to keep learning new things. We would probably not be members of BAWA unless we want to learn more about our chosen hobby or craft. Training is always good. In woodworking there are an infinite number of things you can learn and many many ways that even the most masterly of craftsmen can improve their work by seeing and hearing how others do their tasks.

Workshop visits are particularly beneficial. You do not go with the same pointed focus as you would going to a veneering class or a class on plane making for example so you see many more little things that allow you to perform better, or achieve a higher standard, when working in your workshop.

Recently we went on a visit to Loy Martin, the studio furniture maker who was our guest speaker last December. There was a good attendance of members. When we arrived at the workshop Loy had a supply of coffee and pastries available which refreshed us after our journeys from all over the Bay area before we got round to the workshop tour. 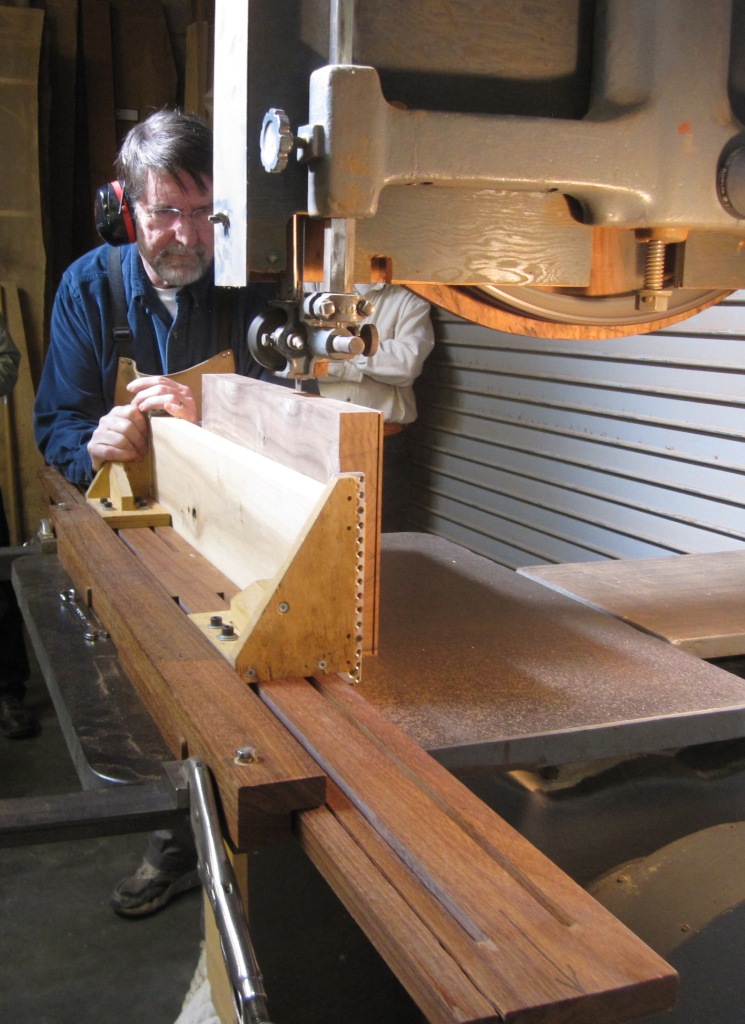 Loy showed his setup for cutting veneers on the bandsaw.

It is different to the way most of us cut sheets of veneer panels where we rely on the gap between the fence and the blade to determine the thickness of the sheet. Loy has made a special fence where the stock is fastened by 2 sided tape to a backing piece of wood attached to the fence. The sheet of veneer being cut is on the outside of the blade. Key to the system is the method by which the fence can be accurately advanced the thickness of a veneer sheet + saw blade kerf for each cut.

After explaining how the jig worked and the type of blade he used, etc., Loy demonstrated it by cutting 4 sheets of beautiful patterned walnut. He then surprised the whole group by telling us that the 4 freshly cut sheets were the raffle prize for the visit. Many of us spent the next couple of hours thinking about what we could do with the 4 sheets until they were eventually won by Claude (who some say now has an obligation to make something to bring to a show and tell at some future meeting) 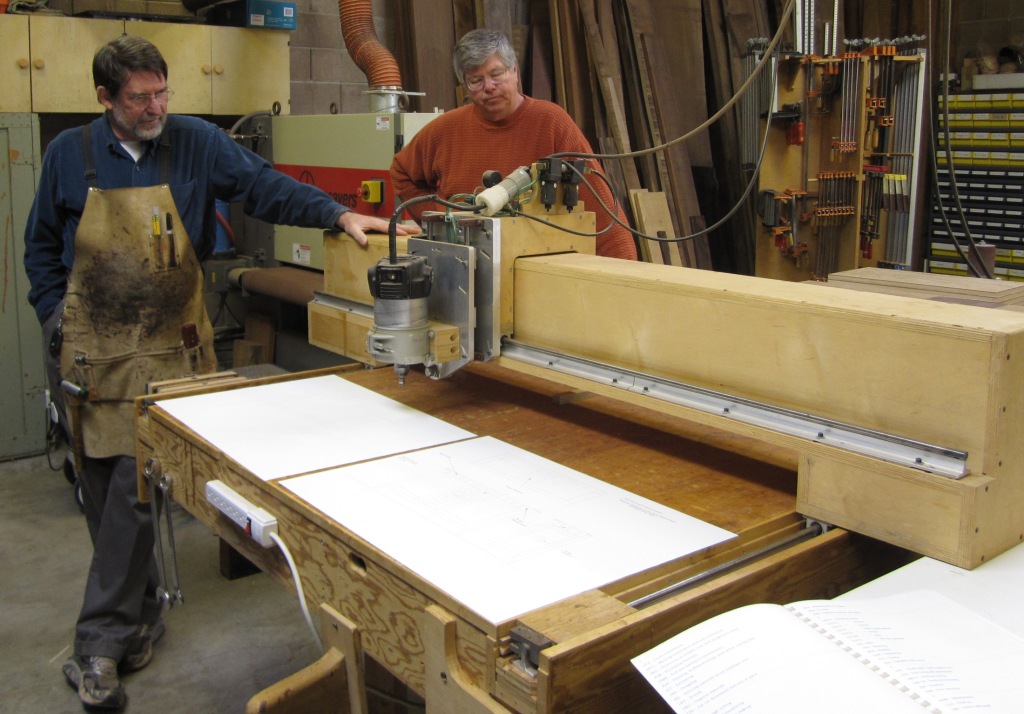 Loy also explained his workshop made router machine and how he used it. The machine is very substantial, with something over a 4 ft. x 8 ft. capacity with accurate X, Y, Z moving capabilities. 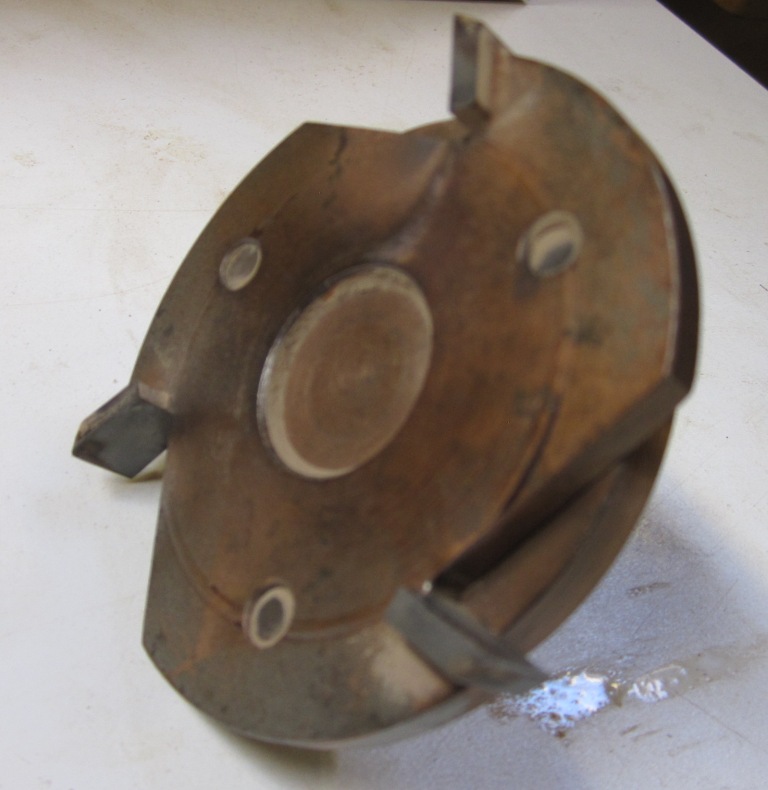 It is even able to handle a heavy 3in diameter surface cutter for cleaning up rough-sawn boards.

Our BAWA calendar already has 2 other shop tours plus training classes on the use of vacuum bags for bending and gluing and wooden plane making class in the next few months so it is starting out to be a great year for us.

After Frank Ramsay called the meeting to order at 7:00pm with a resounding crash of the gavel. The raucous crowd quickly settled down and the many guests introduced themselves. They were: Darryl Dieckman, Curtis, Xin Chen, Paul Mueller, Simon Watts, Gary Hicklin, Bob Gurarro, and Jay DeWolf.

Frank Ramsay briefly reviewed the actions taken by the Board of Directors at its meeting that had preceded the regular meeting tonight. The budget for last year was reviewed and the financial performance noted. The club had an operating surplus of $1,300 largely because it was not necessary to pay as many honoraria as had been planned. The Wood Show was a grand success with greater participation and more pieces exhibited than last year. The show produced a small cash surplus.

Per Madsen reviewed the program schedule with particular attention paid to the upcoming Saturday workshops.

On Saturday from 10am to 12pm, Jan 26, a Workshop Visit event is being held at the workshop of Loy Martin, 150 Grant Avenue, Unit F, Palo Alto.

On Saturday, February 9 there will be a special workshop on Vacuum Bagging Techniques to be held at Woodcraft in San Carlos, 9:30am to 12:30pm.

On Saturday, February 21 there will be a visit to IDEO at 100 Forest Avenue in Palo Alto. A Plane Making event is being put together for March 9. 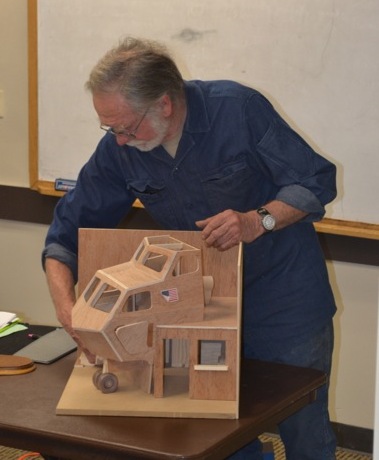 The Janet Pomeroy Center for the handicapped would like to have an indoor fort constructed for the kids. Frank Taylor has constructed a scaled mockup and he assembled it for us. It starts with a kitchen containing counters, cabinets, simulated stove and refrigerator. Then it literally takes to flight. An airplane cockpit is placed as a roof over the kitchen. It has doors, seats for the pilot and copilot and windows. WOW. Volunteers are needed to make the kitchen components. Frank will build the airplane. Assembly is planned in April.

There is an estate tool sale on Jan. 26 to sell Bob Berryman's tool and wood collection. Proceeds will benefit Rebuilding Together.

John McCormack, our own BAWA member His visit to the Wooden Boat School in Brooklin, Maine last summer. John's previous experience had been to help build 2 boats at the Spaulding Boat Center in Sausalito where he is a youth program teacher.

John introduced his mentor, Simon Watts who joined us as a guest tonight. Simon is a well known boat builder and furniture maker living in the Bay Area. His book "Building a Houseful of Furniture: 43 Plans With Comments on Design and Construction Simon Watts" is published by Taunton Press but curently out of print.

The Matinicus Island boat is a Maine fishing boat, 14 feet long with a beam of approximately 4 feet. The original design was by Merrill Young and the plans came from Walter Simmons.

Building a Houseful of Furniture: 43 Plans With Comments on Design and Construction Simon Watts, Taunton Press, out of print.

The first step in the process was to produce the loft, or flat drawings of the shape of the boat's hull. These drawing would be used to produce the molds or cross-sectional elevation forms at intervals along the length of the hull, from stem to stern. The molds were assembled up side down on top of a strong back, tapered end to end since this is essentially a double bow boat. Then a keel beam is attached to the apex of the molds running the length of the boat. The bow and stern pieces were made of red oak. Northern white cedar was used for the planks and ribs of the boat. Two planks were cut from one shaped banana board 1" thick by splitting it on the band saw. 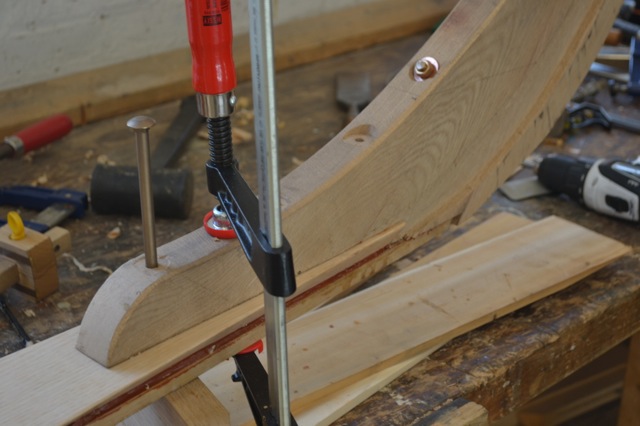 Bronze bolts secured the bow and stern pieces to the keel. Copper rivets attached the planks together. 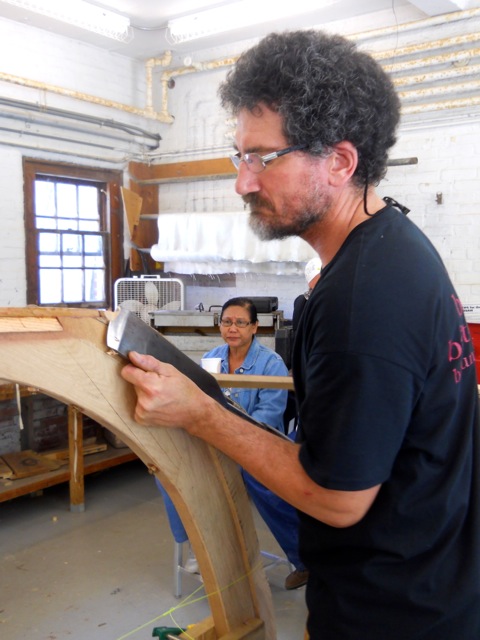 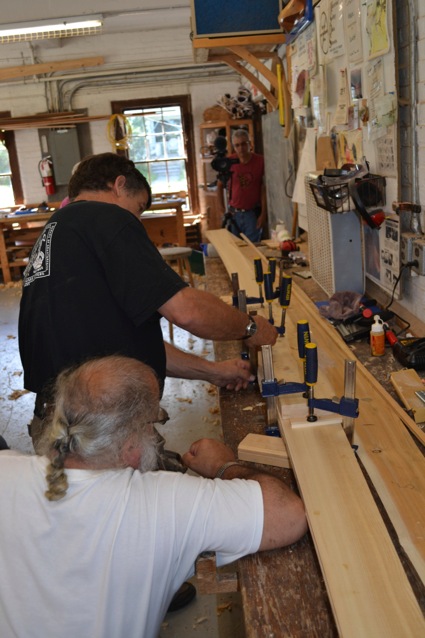 During the first week there were 10 builders at work on the boat, working in pairs. 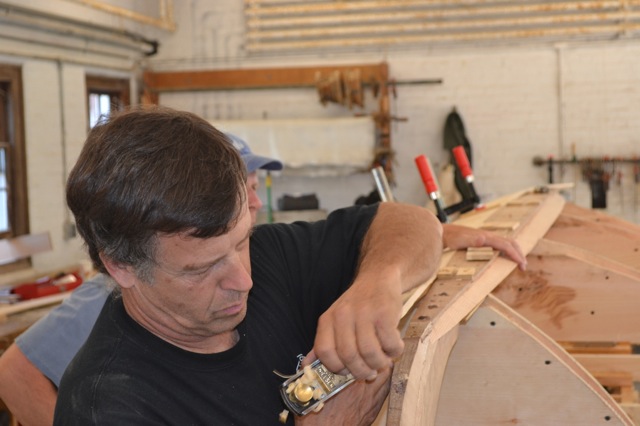 During the second week, 7 shipwrights worked to complete the task at hand. Tracing the shape of a plank to fit the previous plank and to meet the line of the station representing its upper edge is called spiling. You use a batten or a wide bit of the same plank stock, as we did. A rabbet is cut the full length of the keel of the boat using a giant paring chisel called a slick. The first plank(against the keel) is called the garboard. The second plank is called the broad strake. The last plank (at the gunwale) is called the sheer strake. This type of boat construction is called Lapstrake. There are bevels in the planks where they overlap. 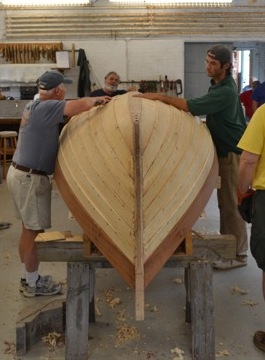 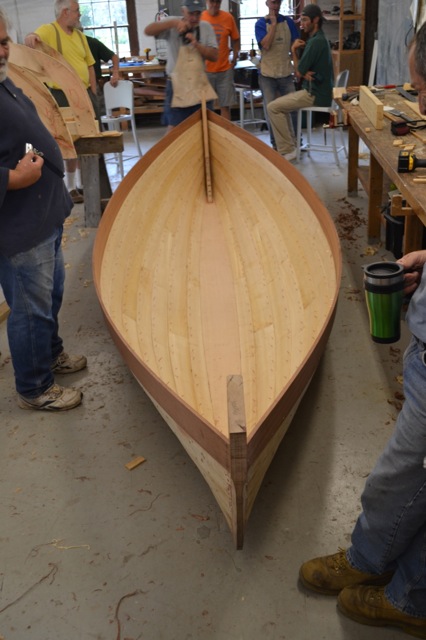 After the hull is fully formed, then it is removed from the molds, and rotated to an upright position. The steam bent ribs are formed, and then added at predetermined intervals inside the hull. The centerboard trunk is added along the centerline, at mid ship. 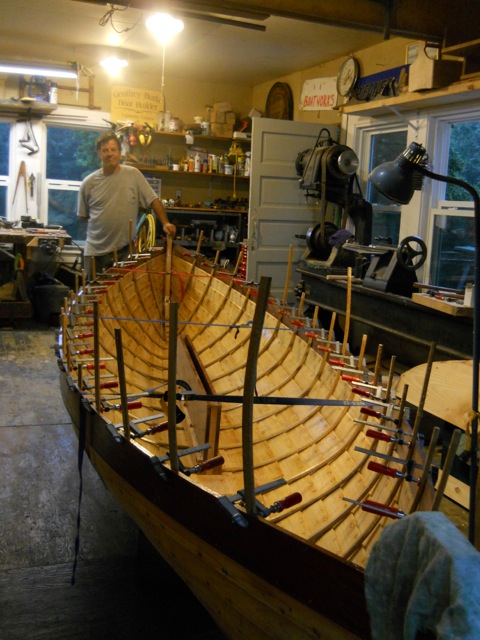 The class was not able to finish this part of the process, so it was completed locally after the class adjourned. The finished boat was donated to the school.

The school was conducting simultaneous classes: one in oar making and the other in making a plywood lap strake boat.

The slideshow that John presented showed this process in vivid detail, clearly showing each step in the process. It was also evident that everyone was enjoying it immensely. Great presentation and Maine in the summer looks inviting. Thank you John.

Tonight was the annual box contest event and Mark Rand went through the voting procedure. A description that was either over everyone's head or the audience was just not listening.

Simple instructions: vote only once for each box in all categories. But somehow we got our winners. 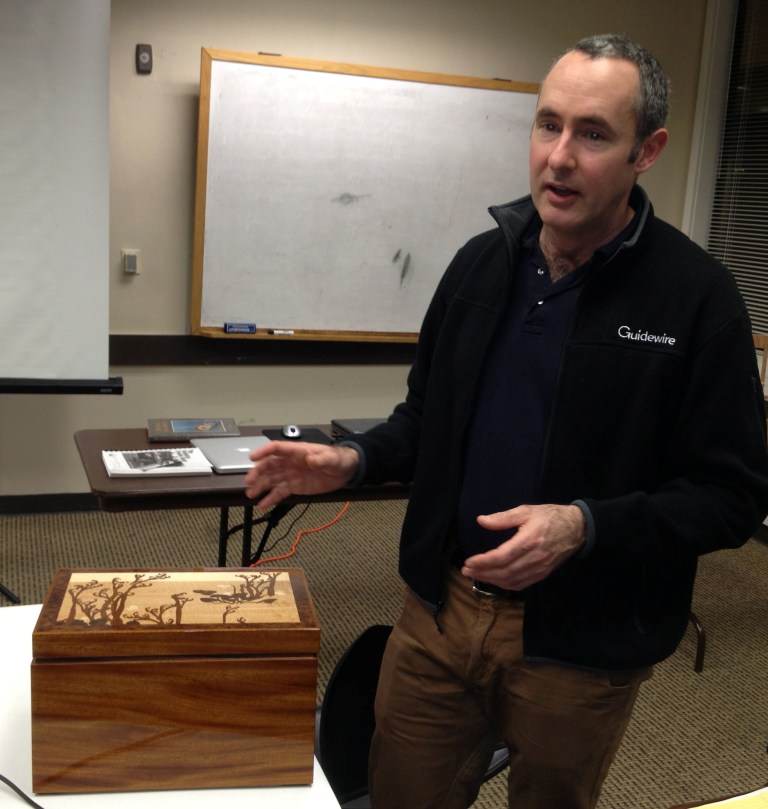 John Seybold made a Belize Mahogany box for his son with mitered corners and a 4-way book match. If you ask him how it is done, it is really pretty straightforward. The finish is a UV cured polyester styrene. Lots of protective clothing when working with this one, maybe even sunscreen.

Jerry Lewis made two boxes: The wenge and lacewood box with the carved bone representing a whale on the lid was shown at the Wood Show. The bone is cow femur from Androtti's market. The second box is Japanese Inspired and made of bloodwood. It is lined with deep red velvet. The base of the box is carved to created a dimpled appearance.

Most Unusual, Most Useful, Most Beautiful 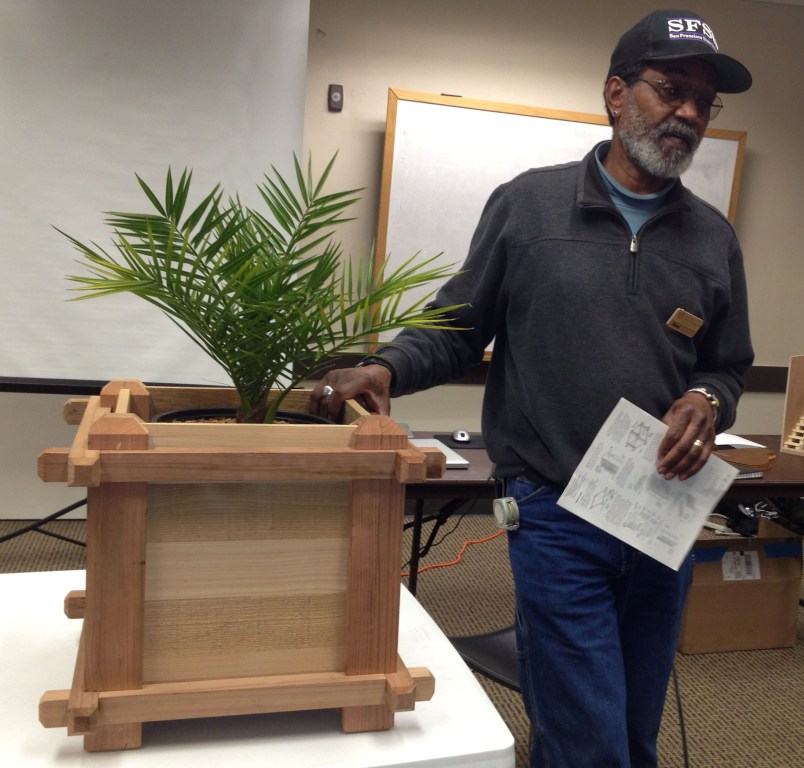 Stan Booker presented the planter box he had shown at the Wood Show. The box is made of redwood and the parts interconnect without glue to form the planter. Because Stan collects plants, specifically palms, he is finding this box to be very useful. He is making a bigger one, we think for the 40 foot tall palm in his backyard. 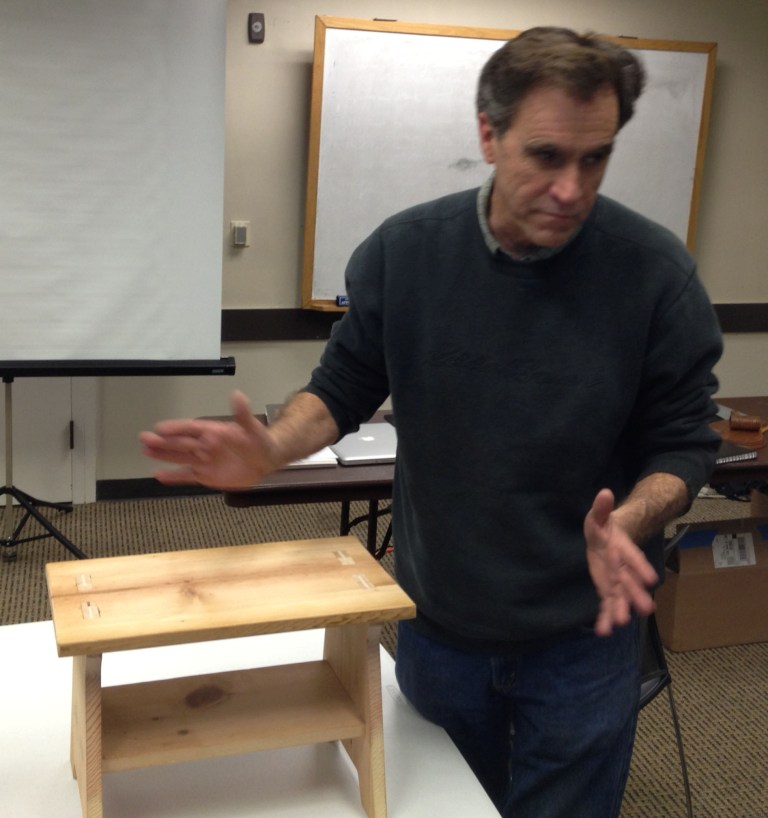 Jay DeWolf presented a pine stool the design of which he hopes to enlarge in a later construction to become a table. It has wedged mortise and tennon joints in the sides and top.

Stan kept up the long admired and cherished tradition of doling out the door prizes. The competition was fierce and the winners exultant. Not enough in the kitty yet for the raffle boards. Keep buying tickets, guys.

Remember this Saturday at Loy Martin's workshop: Saturday 10am to 12pm.

Website Tip
If you want to search for a particular speaker or topic on our site go to Site Map and check the list of topics in alphabetized list. (If you think there are more references need in the Site Map let me know.)