As we move towards the end of another year we can reflect on the happenings and accomplishements of 2017.

We had some very interesting guest speakers including:

Kevin Fryer, San Francisco based Harpsichord Maker, described some of the traditional steps in the making a harpsichord.

Steven Baumar, Professionals Finisher, talked about the art of finishing cabinets and demonstrated a few different finishes that can be achieved.

Jon Sauer, Ornamental Wood Turner, showed pictures of his lathes (including his Armbruster Rose Engine) before demonstrating the turning of a very elaborately engraved wooden spinning top look which he made look so easy.

On one nice May evening we all stood outside the meeting room to watch BAWA Member Mike Bray demonstrate how to cut big sheets with a track saw and several jigs.

We had a special guest, Chris Gaston, PhD Associate Professor, Facility of Forestry University of British Columbia, who was visiting the Bay Area from British Columbia. He told us about the forestry renaissance and use of wood in Canada from the building of seven story apartment blocks to the encouragement of First Person carvers to make traditional cedar door panels.

Torin Brandborg , Furniture Maker from the Bay Area, talked about his boat building tas well as the design and building of spindle back chairs.

BAWA Member, Tom Gaston, gave a lecture on workshop first aid, covering the range of problems from splinters to amputations - a serious subject that was listened to intently.

One of our Biannual Wood Show Judges, John Lavine, talked about his background as a teacher, editor, woodworker and his attraction to the Arts and Crafts style because of its straightforward joinery and shaping.

We were looking forward to the return of Mark Tindley this time to talk about Building Tables in the Greene and Greene Style but unfortunately the disruptions caused by North Bay fires meant it had to be postponed. He is rescheduling for 2018.

We had a series of Tech Talks by BAWA Member, Ken Napior, on classic furniture styles.

At one meeting BAWA Members Bruce Powell, Mike Bray and Frank Ramsay gave a trilogy of presentations related to Marquetry, Spooning and Stringing.

BAWA Member, John Blackmore, demonstrated his LapSharp sharpening system as well as the use of Japanese water stones.

Earlier in the year BAWA Member, Steve Rosenblum, arranged for a group of BAWA volunteers to build 12 wooden windows for the Matthew Turner Wooden Ship being built in Sausalito.

We also had our regular "2x4" and "box making" challenges. Over the year members brought about 50 pieces of their work to the meetings to show and let us learn from.

Box making and Toy workshops were also held during the year.

We also visited China Camp State Park in Marin to look at the Felucca, a full size replica of the traditional wooden fishing boats that have been used in the eastern Mediterranean for centuries.

In December the year will finish with the advantages of using Euclidean Geometry in woodworking - which I suspect is a first for BAWA and a first for any woodworking club for several centuries.

Whatever your style of woodworking is, I wish you Season's Greetings and wish you success with all the projects you start next year.

The first order of business was a Treasurer's Report by John Blackmore.

The sale of donated items from the estate of Arnold Champagne brought in $3218, without which we would have had a deficit of $1517.

Next item was the election of officers.

All present officers have agreed to stand for re-election and were elected by unanimous acclamation.

Ray Burger agreed to stand for election as program director provided that he gets some help at the beginning while learning the ropes.

Because Stan Booker is unable to attend Sunday meetings regularly, Mike Bray and Bruce Powell have agreed to take over the wood raffle and door prizes. Mark Rand will continue to be in charge of refreshments.

The regular meeting began at 6:30.

Guests and visitors were Alex Goldberg, who moved here recently, Greg Birge a local furniture maker, and Bob Garrison who is a woodworker and wood turner

Frank Ramsay announced that our next meeting is on Sunday 10th December. 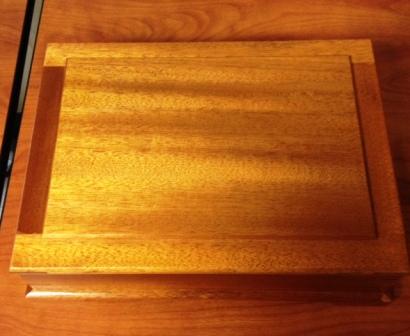 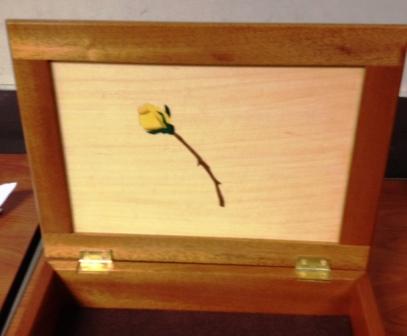 First was John Wilson showing a Mahogany memory box for a newborn with mitered corners and marquetry in the top, finished in wipe-on poly. 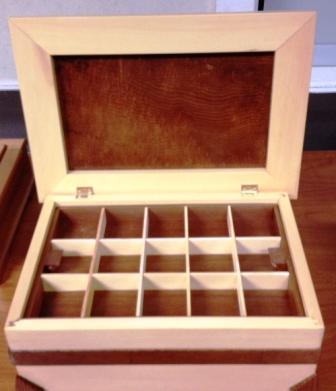 Next, John Blackmore showed a jewelry box made of Alaskan Yellow Cedar and redwood burl, with lock miter joints, finished with shellac. 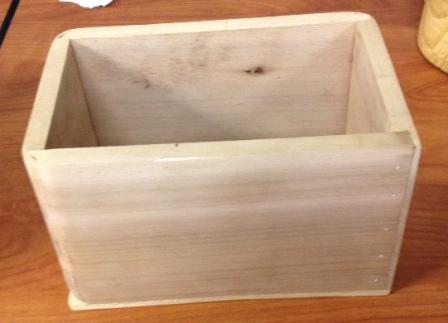 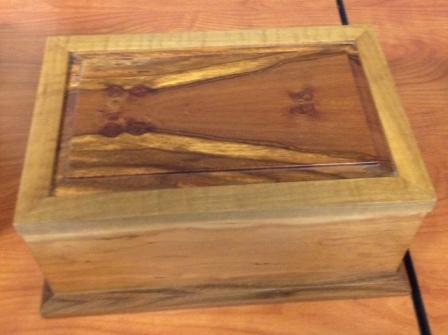 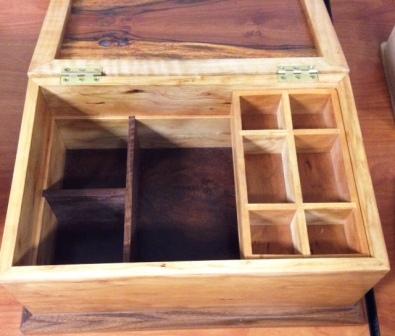 Tom also showed a jewelry box made of Pepperwood, Walnut, and Cherry with trays and interior compartments.

Burt Rosenzweig showed a box routed out of a single piece of Maple with a sliding dovetail lid finished with a Minwax light oak stain and Danish oil. 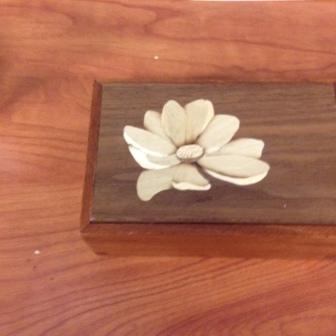 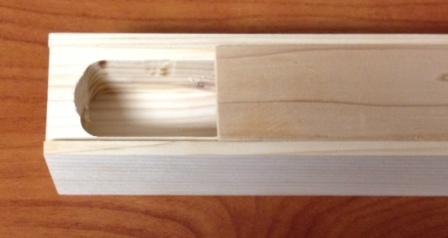 This was followed by Aaron Blohowiak who showed a box made of Maple and Cherry. 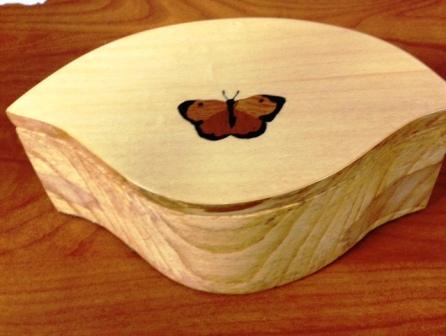 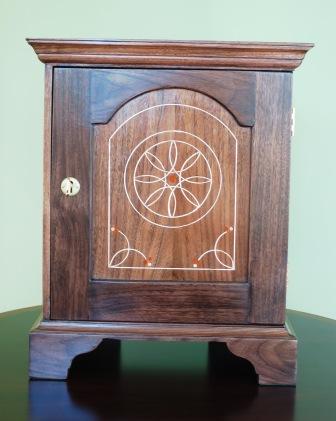 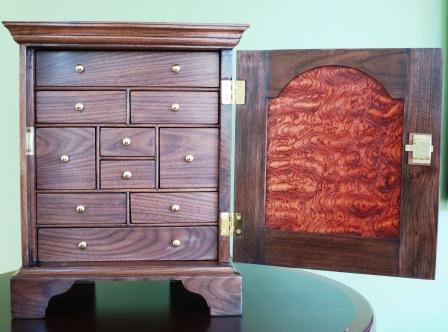 Finally, Frank Ramsay showed an antique looking Pennsylvania Spice Box (some would call it a cabinet) made of Walnut, with draws made of Walnut, Mahogany and Hard Maple. The door is lined with Bubinga veneer. 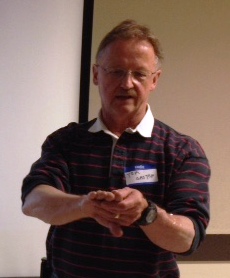 Tom is a physician and gave us his take on injury treatment and prevention. The first thing to do is use all safety gear-safety glasses, hearing protectors, dust mask, tool guards and saw splitters. No alcohol should be consumed before or during shop activities and don't work when you are tired. Be careful with noxious chemicals and make sure you have good ventilation and use suitable respirators when needed. Woodworkers have 20-40 times more cancer than others. Keep your tetanus shots up to date (every 10 years for booster) and be careful around electricity(always keep one hand in your pocket when doing electrical work to avoid shocks across your heart.)

Eye first aid-immediately rinse any chemicals out with water. Do not rub if any particles get in. If the particles are metal or penetrate the eyeball go to the emergency room immediately.

Lacerations and abrasions-Lacerations(cuts) are usually easy to deal with. Apply direct pressure to stop bleeding, wash out with water and soap and apply super glue to hold top edges together. Medium thickness glue is best, just like you have in your shop. No need to get the surgical kind, as there is no difference. Abrasions (scrapes and saw cuts) are harder to deal with and may require a visit to the emergency room for cleaning and stitching. Infection is a serious concern and antibiotic ointments could be used. For both Tom recommends Tegaderm clear plastic bandages which allow the wound to be visible through the bandage. The back of the hand is extremely important to protect as all of the tendons that move the fingers connect to the forearm through there.

Punctures and splinters-Have sharpened tweezers on hand to remove splinters.

Amputation-Immediately apply pressure to the location. Save the amputated part in a plastic bag placed over ice. Do not put the part directly in ice, as this will cause it to get hypothermic and die. Immediately go to Stanford or UCSF for re-implantation. This is highly specialized microsurgery done by teams of doctors and technicians with surgeries sometimes lasting an entire day. A finger can be re-implanted as long as 12 hours later if it is preserved on ice.

Electrical shock-electricity can cause a burn, nerve injury and cardiac arrest 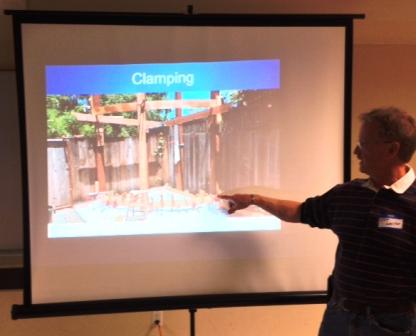 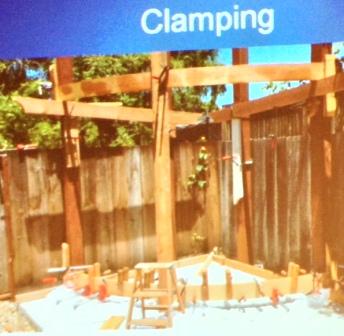 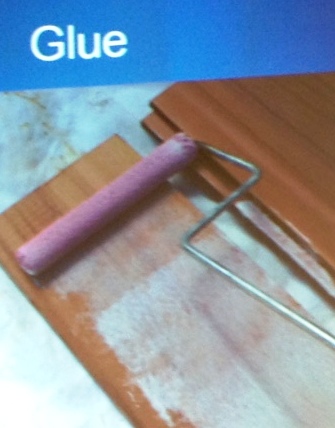 Tom Gaston showed pictures of a pergola he built using bent wood in a back yard for a hot tub. The enclosure is about 90x90 inches with a round front. The round front was made by gluing 3/8" thick cedar slats, 12 feet long together using Titebond III glue. The slats were bent in place and clamped to an 8x8 redwood post frame that was bolted together. 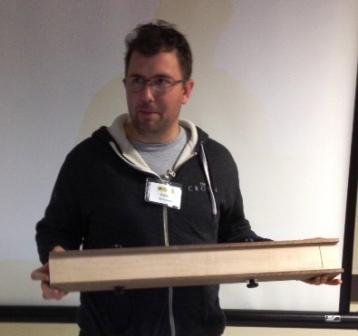 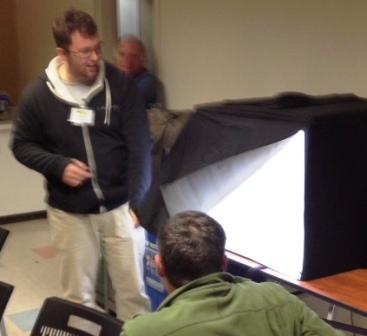 Aaron Blohowiak showed a shooting board thicknesser and a photography box for small objects with built in LED lighting.

Bruce Powell showed a tea light candle holder, for which he used a 1-1/2" Forstner bit to drill the candle holes. 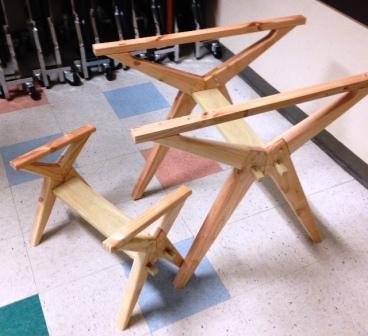 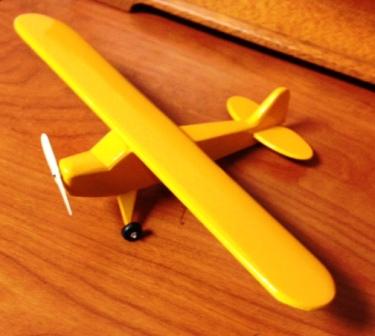 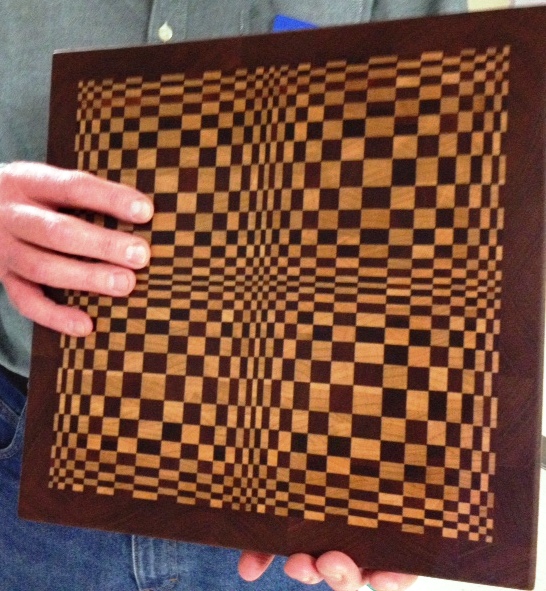 
John Wilson described his visit to the Edensaw warehouse in Port Townsend, Washington.

Frank Ramsay described the poor example of industrial design he saw at a Peet's at 10th and Mission in San Fracisco. The tables used wood slabs with unfilled holes and cracks that could easily collect decaying food particles and the top had been fastened onto the metal frame in a way that it could not move with changes in humidly.

The multiple winners of the box contest were then announced to general applause.

The next meeting will be our annual potluck on December 10th.