Recently we had a few days in Yosemite, our first visit in about 3 years. We had read about the fires and the landslides but on our trip we saw the area has taken quite a beating in recent years.

We drove in on Hwy 140 from Mariposa. When I first drove that road many years ago it was twisty clinging to the edge of the narrow and fast flowing Merced river to El Portal. I went white water rafting on it once in the eighties. In 1996/7 there was the great flood in Yosemite the river rose to a height of about 6 ft.. Many of the cabins at Yosemite Lodge were destroyed by the water and never replaced. As this flood water swept down below El Portal the swollen river washed away much of its banks along Hwy 140 and washed away the 2 pedestrian suspension bridges that crossed it. When the road was reopened the river bed looked to be about 2 times wider than it was before losing some of it's charm and putting an end to white water rafting on that part of the Merced.

In 2006 a few miles west of El Portal there was a massive bolder slide that went on for several months. When it eventually stopped the slide had covered about 600 ft. of the roadway under gigantic pile of boulders. The whole road into Yosemite was totally blocked. They installed a temporary bridge across the river and instituted a one way system controlled by traffic lights. The delay on the red light can be up to 15 minutes. It appears to be permanent as the mountain of boulders must be 100ft high or more and totally impracticable to remove them out of the river valley.

This time we noticed many brown trees on the sides of the hills. Twice while on the road towards Wawona we were stopped for tree felling as lumber jacks are working to clear dead tees from near the edge of the road that could be a hazard if they fell. It is very exciting to sit in the car with the window down while you hear the chain saws buzzing away then the silence before the sound of branches breaking as the tree crashes to the ground. It is exciting but disconcerting when the National Parks Service is saying that these trees are dying because of the Bark beetle and 65M suffering this problem across the parks. The effect can be seen everywhere. Where there were great panoramas of green trees you now have great panoramas where about 50% of the trees you see are brown – a sign that they have Bark beetle. 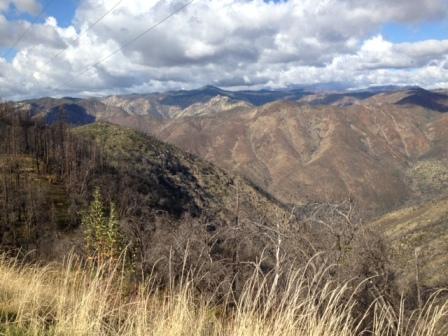 Rim of the World vista point

Coming out on the route 120 North entrance to the park we saw large areas of desolation. We had read about the many forest fires in recent years but did not realize how extensive they had been. We passed the Rim of the World vista point, a scenic overlook on Highway 120 where there is a wonderful view over miles and miles of trees in the Stanislaus National Forest. At least it was miles and miles of trees but that was before the Rim fire that started in August 2014 and was not fully extinguished until November the following year. By the time it was over it had burned 402 sq miles. The view from the scenic overlook is one of total desolation. The trees will grow back but it will take many years.

You can read more about it at: https:wikipedia.org/wiki/Rim_Fire

In the last 20 years Yosemite and the area around it has had so much destructive change. Hard to guess what it will look like in another 100 years.

Call to order by Frank at 5 PM. Minutes of last meeting approved.

John Blackmore: We budgeted on having 70 members this year but have only 60 so our dues income is $500 under budget.

As of October have collected $2303, spent $3657.86 giving a deficit of 1354.86 so far. Cash on-hand down to $4468.23 indicating that we will need to either increase membership or cut expenses to avoid insolvency. We could consider holding paid technical workshops to raise revenue if we cannot grow the membership to 70-80.

John Blackmore suggests changing the meeting to Sunday 4:30-6:30 because of horrible traffic at the present Thursday time. Others suggested possibly later time on Sunday or a later time on Thursday. We agreed to survey the membership on their preference.

We had 20 exhibitors submitting 38 pieces. Reception attendance was lower than last time. Income was $461, expenses $1041, including $600 for honoraria. Mark Rand donated food and Frank donated wine.

We need to find a Program Director to replace Per Madsen who is retiring from the task after 10 years of excellent service, a Membership Chair, and a Newsletter Editor. We will try to recruit people personally.

Our website ads will end on Dec. 31 and we will suggest that people put their items on Craigslist which has a much larger readership than our website. We can still use our Facebook page and emal blasts on items that is very pertanent to out membership.

Board meeting adjoined at 6:15 PM

The meeting began at 7:05 PM with Annual Meeting called to order by President Frank Ramsay, who reported on the results of the Board meeting held early in the evening.

After open discussons the following officers were elected by acclamation:

Per Madsen is stepping down as program director and we are looking for someone to replace him. An email is being sent to all members for suggestions for our 2017 program

John Blackmore reported on the financial situation. At this point we have 60 members but have budgeted for 70 so we are having a shortfall in revenue leading to a deficit of $1355 thus far. We will need to increase revenue or reduce expenses over the next 12 months. Members are urged to solicit new members. Our bank balance is now $4468.23.

Per Madsen described the upcoming schedule.

December: Our end of year potluck and a talk by Frank Ramsay on the club history.

February: We will have harpsichord builder, Kevin Fryer.

Meeting time: At the board meeting there was a proposal to change meetings to Sunday evening instead of Thursday evening to reduce traffic misery. Members' preferences will be checked by means of a survey.

Toy Workshop: Harold reported on the joint workshop held at Woodcraft and the next one to be held at Jamie's shop on December 3rd. A signup sheet was passed around.

Raffle: Stan Booker announced the doorprize drawing at the end of the meeting as well as the ongoing raffle of the walnut board and the 2 bookmatched walnut board pairs.

Give –aways-John Lavine has cleaned out the school shop and brought a bunch of wood items to give away including some tool storage cabinets. Harold Patterson also brought in some items for which donation to the club was suggested.

Reports from the Show Judges, Andreas Strieve and John Lavine

Our two show judges spent nearly 3 hours critiquing the show exhibits. They went through the entries one by one giving valuable comments on design and implementation. They would also explain what a judge would be looking for when they critiqued a piece. It was valuable for the exhibitors. By the end of the evening everyone I think everyone had learned something, ether about their own work or from the comments on someone else's work.

For a reminder of the exhibits: bayareawoodworkers.org/Show2016