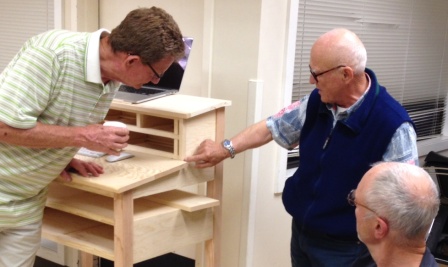 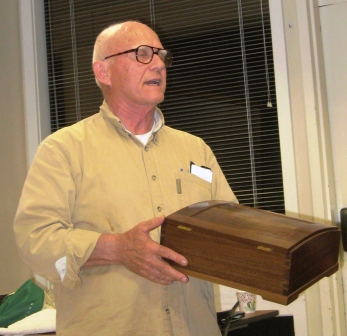 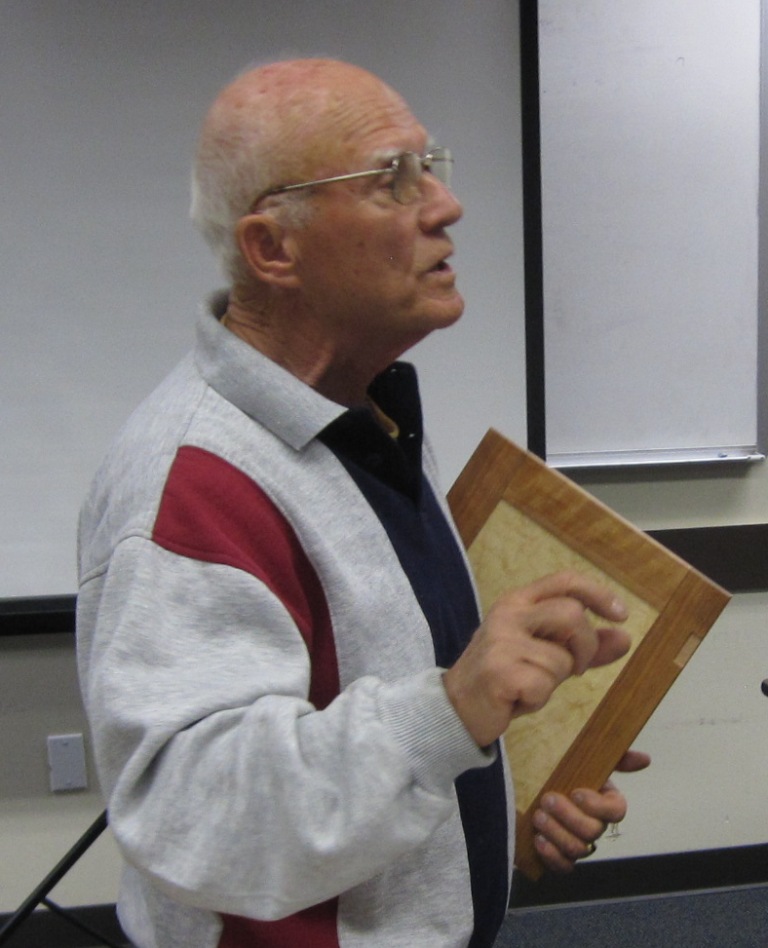 We were all saddened when we heard a couple of weeks ago that long time BAWA member Arnie Champagne had passed away. Below are some of the tribute to him from BAWA members.

Master Chief USN, Master Woodworker, Mighty Good Friend
I met Arnold Champagne when I joined the Bay Area Woodworkers Association. I had a love of woodworking inherited from a great grandfather but no good way to develop my interest and skills. I was in a search mode. BAWA introduced me to Arnie who was offering woodworking classes. I eagerly enrolled in all his classes that I could: work bench, marquetry, dovetails and joinery. What a character Arnie turned out to be. I had been a junior officer in the Navy and as Master Chief I could see how Arnie must have given his commanding officers the conniptions. Here was a guy who knew how to get the job done and done right. And he was not afraid to tell you. Arnie was the same in his woodworking. He had attended what is now the Krenov School of Fine Woodworking in Fort Bragg and he was a master woodworker, no ifs ands or buts. He expected his students to learn and to do it right. He would examine your work, critique it honestly and ask you to learn from your mistakes and show him where you needed to improve. No shortcuts, only strive for excellence. He was always constructive, always a friend and colleague. Now he is gone, courageous to the end. We are going to miss you Arnie. You have given us so much, and left an indelible mark on us and our woodwork.
John Blackmore

I have been a member of BAWA for about 30 years and I have had the privilege of knowing many gifted and talented craftsmen. Arnie was one of the most talented woodworkers I have met. He would always have a lot to say about any aspect of woodworking craftsmanship and he was always right. Arnie inspired me to be more precise in my own work. He was a great treasure to our Bay Area Woodworking Association.
Stan Booker

I was hanging out at Arnie's for some reason, years ago, and we chatted about our backgrounds. At one point I told him about my years working for the envelope manufacturing division of a paper company. Arnie knew so much about so many things, and led such an interesting life, that I should not have been surprised when he asked me which machines specifically. WELL, it turns out Arnie was a printer for the Government (the US Treasury, I think) and knew all the same machines and envelope terminology. A very hard guy to stump!
Michael Bray

Arnie had a deep passion for wood working. His enthusiasm was contagious and he loved to talk about all aspect of woodworking. He enjoyed the opportunity to share his knowledge with anyone who showed an interest. He also had a deep compassion for people and children who were less fortunate. He spent many years helping with the toy program and always participated at rebuilding together events. Arnie enjoyed traveling and had a deep love and concern for the environment. He enjoyed hiking in wilderness areas. I was fortunate to able to be go on a few hiking and skiing trips with Arnie and I was able to experience his enthusiasm for beautiful natural areas. Arnie's enthusiasm and passion of woodworking will be missed by all of us who knew him.
Bill Henzel

I really did not know him very well -- just the minimal encounters at BAWA meetings. I know that he was a long- time, active member, a skilled woodworker, and an enthusiastic presenter when he rose to speak.
John Hickman

During my 11 years as BAWA Program Director I could always count on Arnie for ideas and advice as well as for him to present and share his deep knowledge about his craft and art. Thank you Arnie -- you will be sorely missed.
Per Madsen

Arnold - My friend for 25 years, we had great times together, I will miss you.
Robert Nisbett

I only knew Arnie from the meetings, and of course everyone knew him and he was what we sometimes call a real character. But he was a force, and his knowledge and love of the craft of woodworking was strong and evident for all to see. He was the real deal, a craftsman and jack of all trades who was ready and able to tackle anything. Yes, he had opinions, but opinions based on experience.
Maury Ostroff

Sad to hear. He definitely was a great addition to BAWA. He will be missed.
Harold Patterson

The first time I met Arnie was at one of the first BAWA meetings I ever attend. A member had shown a nice looking box he had made at the Show and Tell part of the meeting. Afterwards he sat down next to Arnie to ask for his opinion. Arnie examined it, looked at every part, then said it was very good – but he added that the edge bars on the lid would have been better if they were a little bit narrower, the reveal was just a bit to deep, the sides should have been a little bit higher, the dovetails would look better if they were spaced more centrally, the curve on the lid was not quite gentle enough…. I joked it was not a Show and Tell, more a Show and Be Told.
Frank Ramsay

Too bad. He was a good guy.
Mark Rand

Arnie was a highly skilled woodworker and a perfectionist. He insisted that drawers had to close against air resistance. His marquetry was beautiful and gap-free. He freely offered his expertise to anyone in need of help with his/her project. He was a long standing BAWA member and Board member as well as a technical contributor. He will be missed by his friends and family both in woodworking and the wider world.
Steve Rosenblum

I was saddened to hear that Arnie Champagne had died. Like most BAWA members I was a student of Arnie's for many of his classes. I l have many fond memories of Arnie, most triggered everytime I use the Krenov style plane I made in his class. As others have already mentioned what drew me to Arnie was his passion for all things woodworking. There was no detail too small or obscure that Arnie would not explore. His marquetry on his tea boxes achieved true artistic expression as works of art. He was a renaissance man who pursued truth and beauty in all his work.
Mark Ferraro, Chapel Hill, NC

There is a large selection of wood available for sale tonight from Arnie Champagne's collection at very low prices. Half of the money will go to BAWA.

Harold Patterson has brought a number of items for sale at silent auction.

John Blackmore announced that a fellow in Redwood City has acacia pieces to give away from a tree he cut down.

Frank Ramsay announced that at the August meeting we will be discussing the budget. Our membership is down and our expenses are up and we need to make some financial decisions at the meeting.

The 2x4 challenge will also take place at that time. We have no speaker for the meeting yet.

John Lavine will speak in September 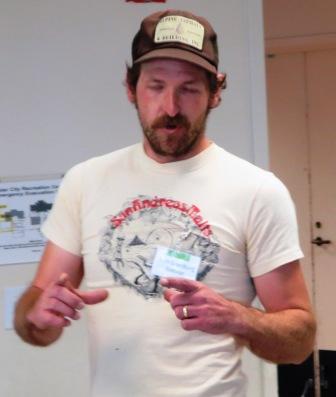 Torin primarily does cabinetry, which involves designing, building and installing of plywood boxes. However tonight he will talk mostly about other things he has done.

Torin grew up in Marin and has a long connection to redwoods as a result. Starting out he was a carpenter and then worked in a boatyard. 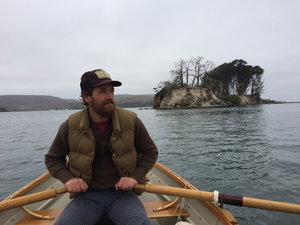 About 3 years ago he built a boat with the help of his wife. Because there are no straight lines in a boat the design is done by lofting, which involves laying out full-scale templates of the pieces. The boat was designed by a naval architect in Maine. Even though the major details are well defined there is still a large amount of "fairing" to be done during assembly to get all the components to fit smoothly. Torin then showed some projects he has done…a tree house for his Dad, red cedar benches using shoulder lap joints, and a claro walnut table. For the latter, he pointed out a design error in which he tried to use miter joints for the edging around a solid wood table. Wood movement over time separated them. He showed a small cherry coffee table using mortise and tenon joinery. Then he showed a boat mast that began as two 2x4 pieces glued together and made round by consecutively sawing off the corners and then sanding it round. 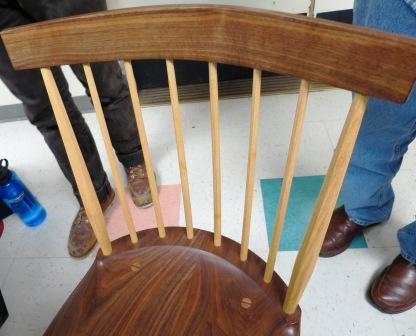 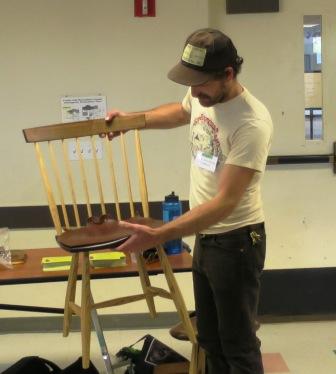 With his friend Stephan in New York he decided to build a chair of his own design made of red oak and walnut. 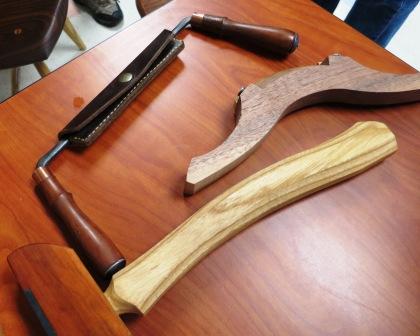 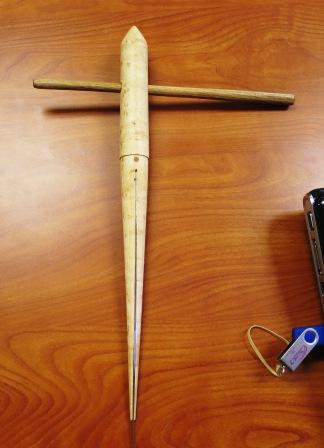 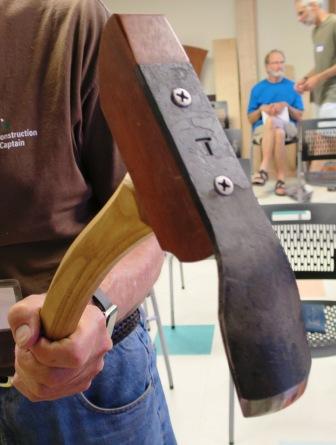 Some of the tools Torin has made

After visiting with blacksmith Pat Quinn he learned how to make tools including a rounding hammer, draw knife, and adze.

Torin tries to use hand cut dovetails as often as possible in his commercial cabinetry. He showed a stool he made using wedged through joinery with legs with a 6-degree taper. His current interest is making chairs which will hold together even in the absence of glue. He drills the holes for legs and spindles by using sight lines on the seat. The chairs have black walnut seats and white oak or ash spindles in back. The wood for the spindles needs to be chosen so that they have straight grain. The back crest is steam bent. He highly recommends Peter Galbert's book, "Chairmakers Notebook".

Torin then described some of the custom cabinetry that he has designed and built…a kitchen with paint grade plywood and teak trim, a bath vanity, a bleached white oak cabinet, a small table with handcut dovetails,. a countertop of 16/4 walnut for a kitchen in Mill Valley, and a white oak bed frame. Presently he uses Osmo wax for finishing which he wipes on and lets harden. To close his talk he showed some of the tools he has made.


Following a 15 minute break, during which members bought Arnie's wood, some people showed boxes they made for previous box contests. 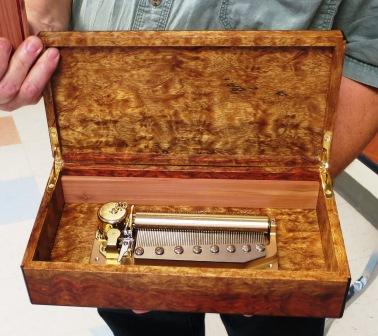 Dave showed a bubinga box with a music insert finished with spray-on poly. 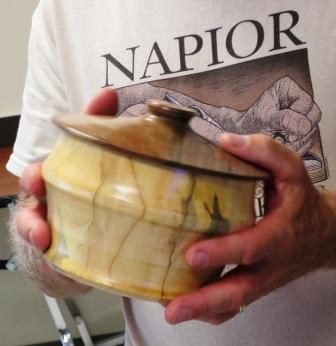 Ken Napior showed a spalted round box with a rubbed finish and a band sawn box with a lid made using sliding dovetails. 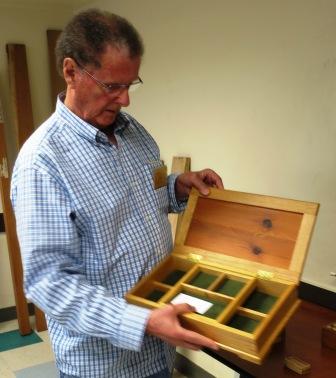 Tom Gaston described a pergola he made of pressure treated 6x6 cedar posts and redwood.


After the silent auction of Harold's items the meeting adjourned at 8:10 PM.