When I arrived at our meeting in Foster City last month I witnessed this game in progress. Nothing to do with woodwork but also nothing to do with the game of football or soccer that I have ever seen. Are we getting over protective for contact supports? 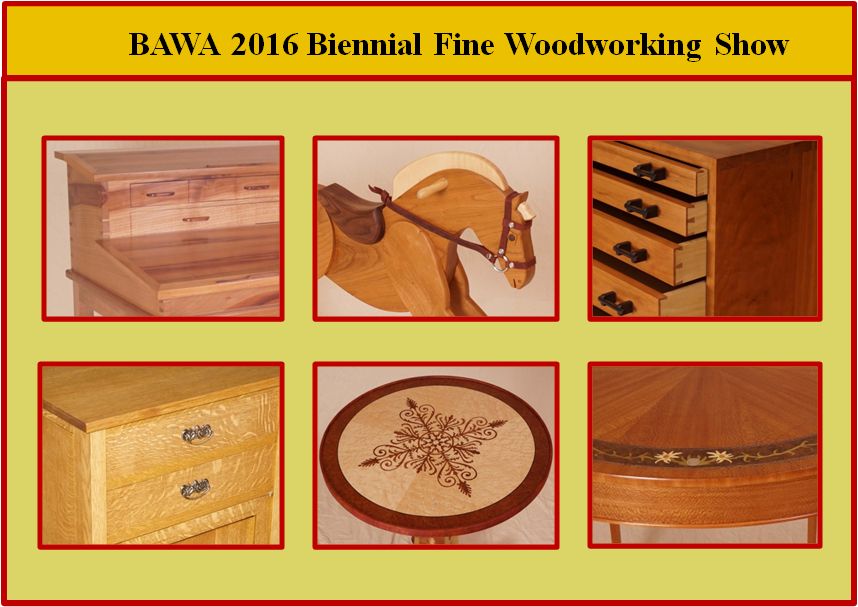 Our 2016 Biennial Fine Woodworking Show is still over 2 months away but it is not too early to decide what you are exhibiting in the show. An old piece you have not shown before, new piece you just have to finish the varnishing on or a new piece you have to start work on very soon?

At the last meeting a member showed me a photograph of a chair he had made for his sister. He had finished it and the chair was now across country in his sister's house so not available for the show. But he had still got the poplar mock-up he had made and a fine picture of the finished chair. So I suggested he put the mock-up in the show and get a 8 x 10 print from his photo for Wallgreens to go with it.

For details on this year's show and on-line entry form: - 2016 Show page


There is an interesting wood sculpture at Bristol University, England. It is called Hollow and is made from 10,000 tree samples. 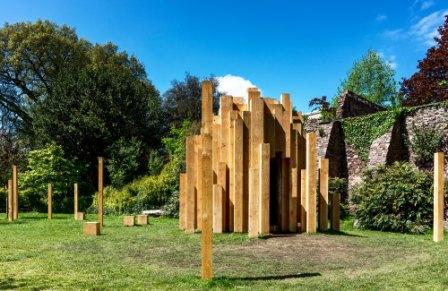 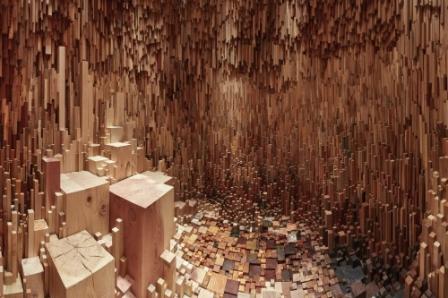 Doug Ryan identified himself as a guest and former member. He came to hear about lasers in woodworking.

In Per's absence Frank announced the August meeting speakers as Harold Patterson and Frank Taylor who will talk about the upcoming Toy Workshops.

John Blackmore talked about our Woodworking Show coming up in October and urged members to submit entries. 7 people raised hands to indicate that they are planning to show their work. John also showed off the new banner that will hang on the front of the Woodcraft store announcing the show.

Stan Booker does not have a piece of lumber for the wood raffle this month but does have items to give away. 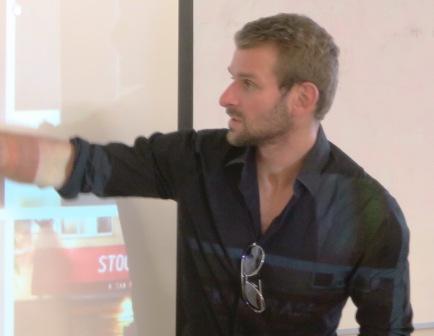 Frank then introduced our featured speaker, Fred Goykhman, who talked about the use of lasers to engrave designs on wood. Frank first met Fred when he was working on his wine box project and needed some veneers laser cut. Fred has a degree in architecture but was always strongly attracted to art and design. 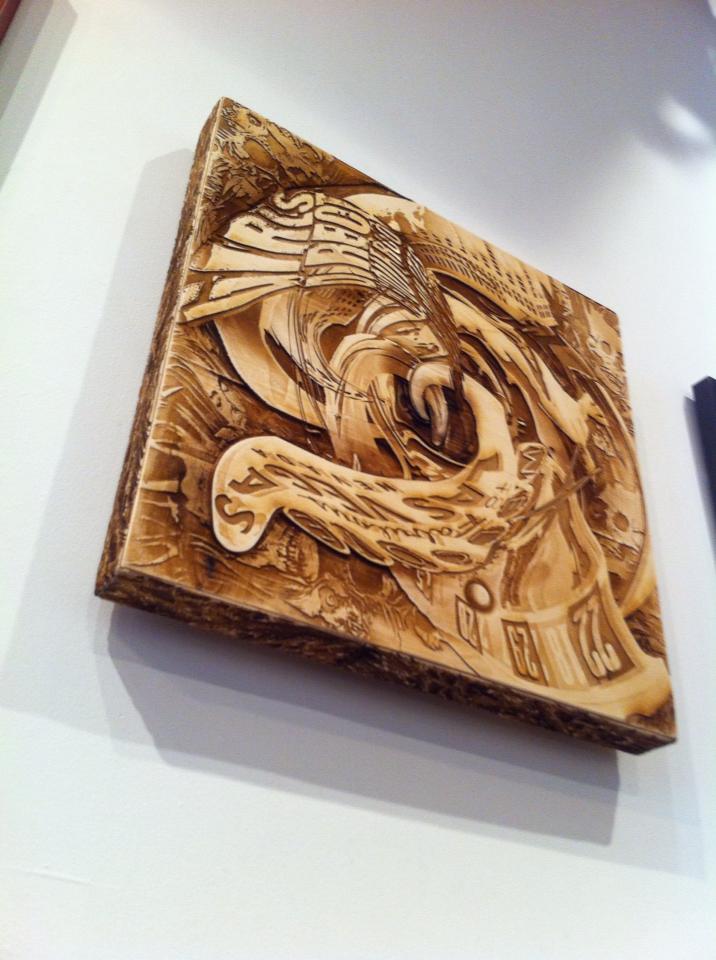 Fred has used the Epilog laser at Tech Shop, which is a rastering laser with 600dpi resolution with a drawing area of 18x24 inches. The designs are captured in JPEGs. Each scan is captured at different density levels using PhotoShop to filter them out. Doing this gives the engravings much greater clarity than could be achieved by scanning the entire photo at once. 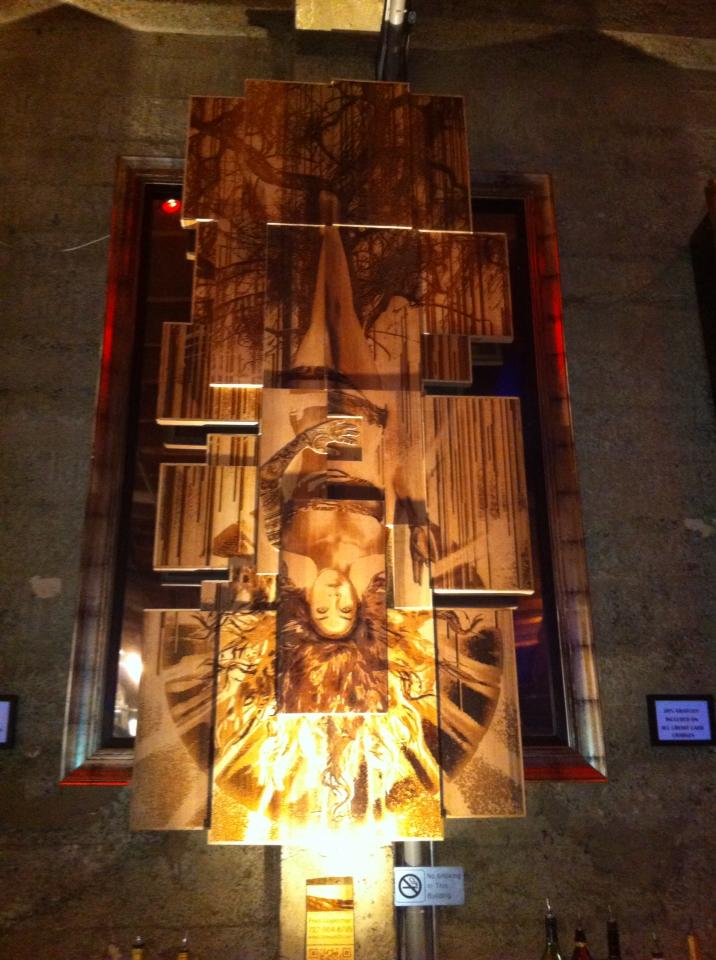 He described the process in detail for the engraving of the photo of a friend captured upside down lying on a white sheet. 4 separate files were required to properly render her eyebrows alone. Fred also uses the manual buttons on the laser to juggle the intensity by small increments. This allows him a more painterly control of the resulting image. Based on his experience, Cedar, Poplar, Birch, and Douglas Fir are well suited to the technique while Mahogany and Oak do not work well. In some woods the laser drives resin out of the wood during engraving which is then re-absorbed into the piece as a natural finish.

Fred also pointed out that the piece cannot be successfully removed from the laser and then continued later on. It is impossible to re-register the piece in the same exact position leading to fuzzy results, although he has intentionally moved a piece to get a sort of 3D effect in a partial scan. He used this technique to more artistically render rose petals. 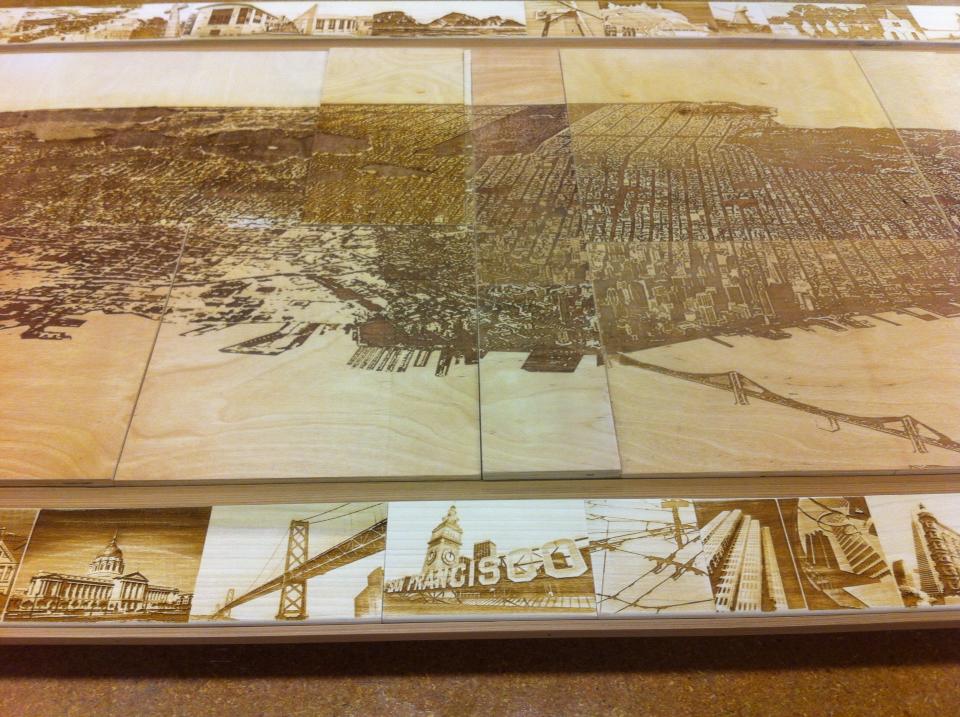 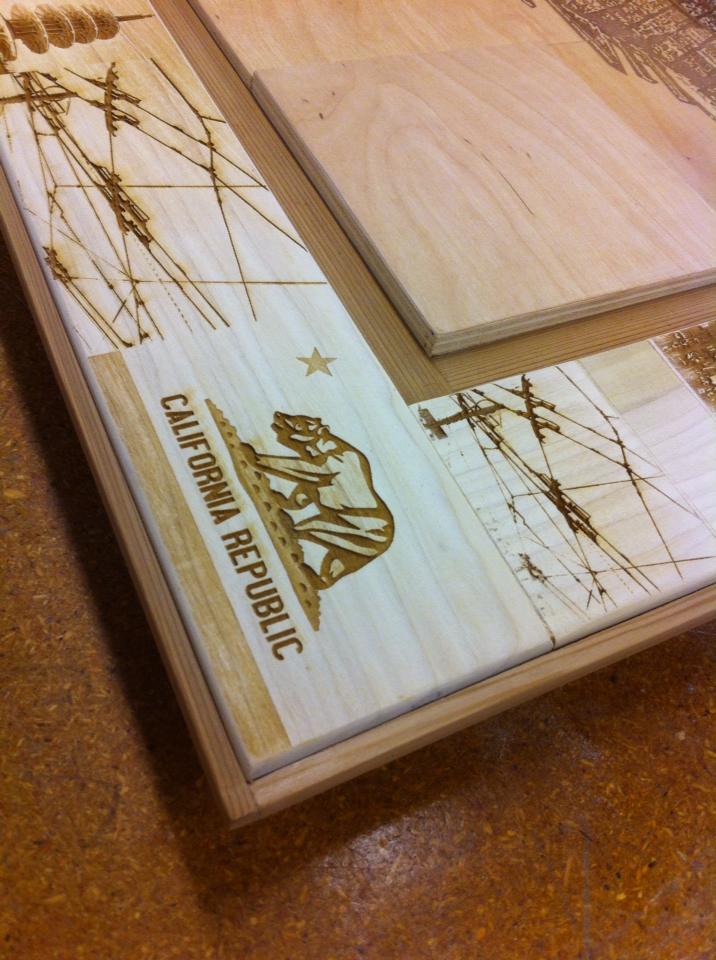 He also showed a photo of a large overhead view of San Francisco rendered on multiple smaller panels with a frame of tourist sites around the outside, much like a brochure. The view of the city was rendered rather crudely but the photos of the tourist sites were done with great care. 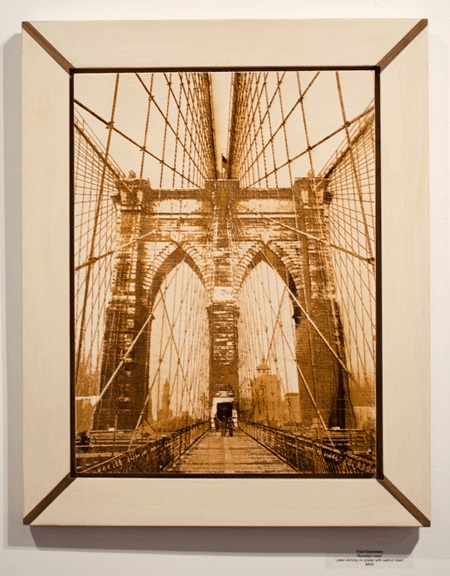 Next he showed an old image of the Brooklyn Bridge from the time when it was only a walking bridge. He tried to render the detail as carefully as possible, particularly the woven cable suspensions. The frame was made up of poplar with walnut accent inlays.

He then showed two images with similar style. The first was based on Huichol Indian religion showing a deer head at the bottom. The Huichol believe that peyote provides them with a portal to another dimension, which this engraving attempts to portray. The second image showed a leopard similarly arranged. In this case Fred used the offsetting technique and re-burning of the leopard's spots at a lower intensity to give them a velvety look.

It costs $145/month to be a member of the Tech Shop and a 2 hour training class to be able to sign up to use the laser. Fred does not usually apply any finish to his pieces as they can tend to muddy the image. He has not noticed any fading of the images over time. Arnie Champagne suggested that he try Pearwood and John Blackmore suggested Alaskan Cedar. 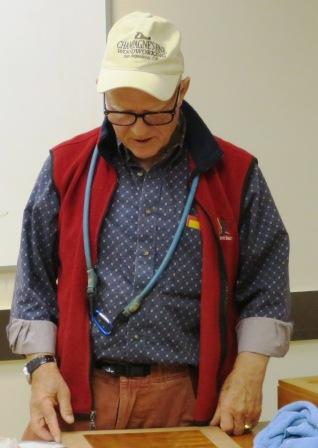 After the break Arnie Champagne described a tea box and a jewelry box he is making as gifts for his family, out of Cherry. He pointed out the importance of choosing proper dimensions for the length and width of the box to get a pleasing result. Square is bad. He used Walnut veneer to decorate the lid of the box and Birdseye Maple for the bottom. 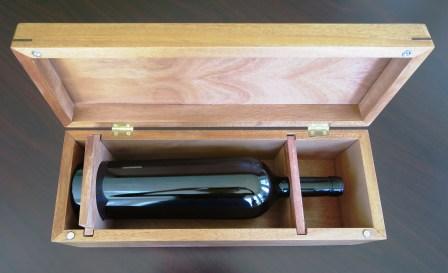 Frank Ramsay then described his work to build 146 commemorative wine boxes with the inlaid symbol XV on the top to memorialize the 15th vintage of a Napa Valley winery. 145 were delivered to the customer and Frank kept the 146th one for himself, although there is no wine in it, only an empty bottle. The boxes were made of African Mahogany for cost reasons as it is much cheaper than the other Mahoganies available but it turns out to be a difficult wood to work. It tears out when cut and springs out unpredictably upon re-sawing. This caused Frank to have to re-do several pieces. The walls of the box are 5/8" thick and miters reinforced with Walnut splines. The box has brass hinges with magnetic catches. Frank finished the inside of each box with General finishes water based glossy varnish. Ted Fay finished the outside.

The meeting ended at 9 PM with the drawing for door prizes by Stan.