I used to dream that I would be self-sufficient with my timber - meaning I would buy trees, cut them into boards, dry them and use them to make beautiful pieces of furniture. I read about the various timber cutting machines you could buy or make from an old tractor engine, a couple of tires and a big blade. I also read about lumber drying boxes you could make with planks, tinfoil and a 60W light bulb. But it was only a dream. Apart from all the technical details I did not have enough room in my workshop to store a single sawn tree trunk let alone a mixture of oaks, cherries and walnuts. 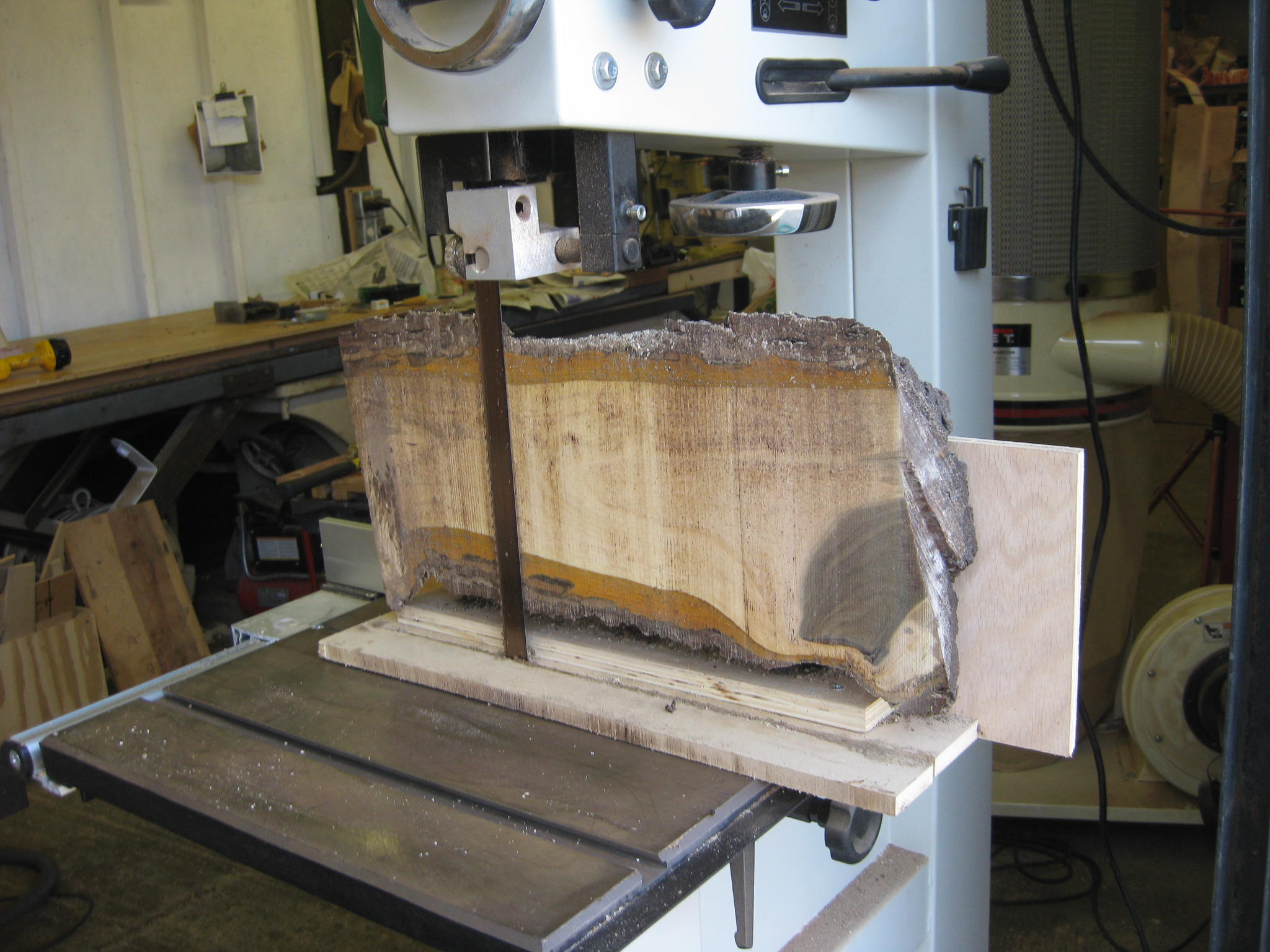 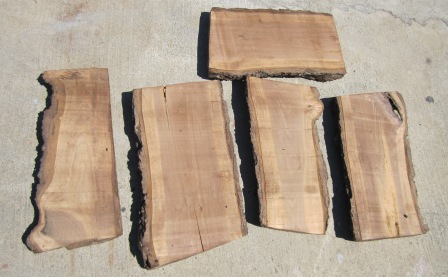 Then a few years ago one of our members came to the meeting and was giving away some short logs of freshly sawn walnut. I took one to the workshop, cut it into 2 in. planks and carefully stacked it at the side of the shop to dry. Over the years I often looked down at it to see it was OK but never un-stacked it. Earlier last month I decide the time was right so I un-stacked it and laid the pieces out on the bench to examine them. They were about 19 in. long with thick bark and a lot of sapwood with some heart wood - but very little.

The problem I now have is what to do with it. By the time I cut away the edges and extract the usable walnut there may not be enough for even a small box, and I do not make boxes anyway. I think I could have bought a better bigger piece of walnut for less than $20.

At the end of the same week I exposed my self sufficient supply of walnut I went to Earthsource (PALS) in Oakland and saw some 5/4 Alder that would make a fine table top. I went back to get some the following Tuesday and Earthsource had gone. It looked like they were being liquidated by the landowner as everything was being moved out - the end of an era. I liked Earthsource as they had a very large selection of different woods all stacked vertically in racks so I could look at all of the individual boards and select what was the most perfect for my projects. Good for a furniture maker but maybe not a profitable business model for today's world?

In the last few weeks I have visited several other wood yards in the Bay area. They all have some good lumber but none are as furniture maker friendly as Earthsource. Some do not have a great selection of timbers or boards. Some have their stock in deep horizontal bins which makes it much more difficult to select the most perfect boards for your projects. One has a great selection of timber but it is all perfectly milled to exact sizes, and very expensive.

At this time going back to my dream of being self sufficient would be great but is not practical so I will just have to work a little harder to find my perfect project timbers.

The meeting was called to order by President Frank Ramsay punctually at 7AM.

The following people introduced themselves:

Dan Goodman reported on the status of the stairs and deck we built for Rebuilding Together. The group that was supposed to apply a clear finish has been unable to do so and Dan asked for volunteers to help out with this on Saturday, August 4th. He wants to get 10-12 people and he circulated a sign up sheet.

Stan Booker announced the new raffle item, which consists of several maple boards valued at $99. He also has many sheets of 400-grit abrasive to give away.

Neal White announced a silent auction for an 8-inch Delta drill press with proceeds to go to the club.

Neal Spoda announced that a woodworker was donating a 220V Craftsman Radial Arm saw and stand, which has been unused in its original packing. It needs to be picked up from its current location and assembled. Proceeds will be donated to the club. Details are posted on our website.

Jamie announced the next Toy Workshop will take place at his shop on Saturday, 7/21. He passed around a sign up sheet.

Per then went through a summary of the upcoming programs. Our next meeting will take place at the old Facebook campus. Frank will have a banner to direct people to the wood shop there. The speaker will be Ted Fay who will talk about finishing fine furniture.

The details of future meetings can be seen at: bayareawoodworkers.org/BAWA6Calendar.html

Per then introduced the program for the evening with the subject of mortise and tenon joints and furniture joinery. 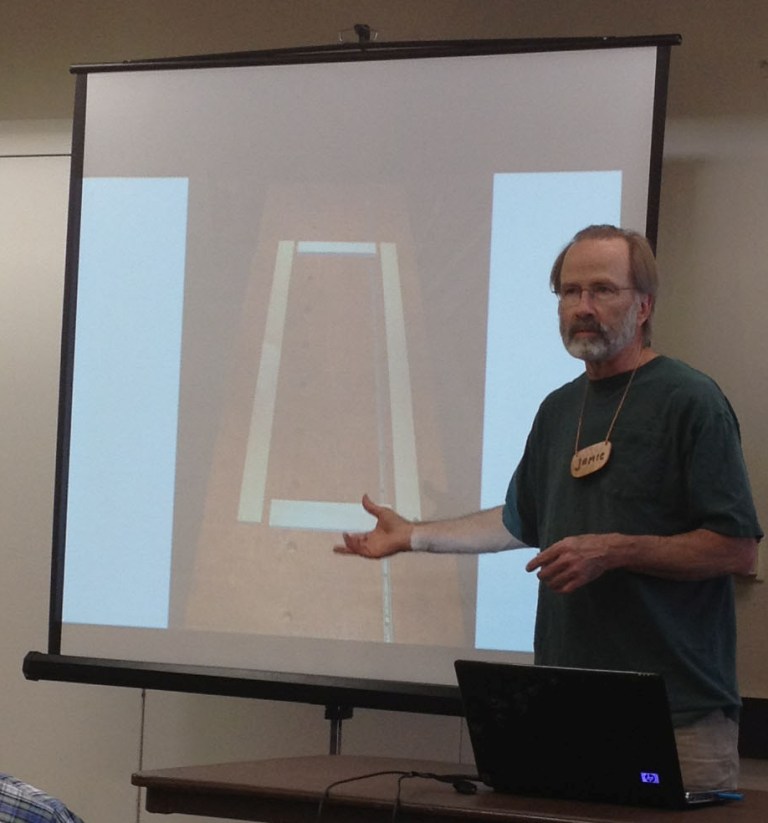 The first speaker, Jamie Buxton, talked about his preferred method for making mortise and tenon joints after trying almost every other method. He claims that his method gives him rapid and precise results with no need for fancy fixturing or dedicated machines. He uses just a plunge router for the mortises and a table saw for the tenons. He showed as an example a recent project he built which had 8 frame and panel doors which had tenons on the rails and mortises on the stiles. 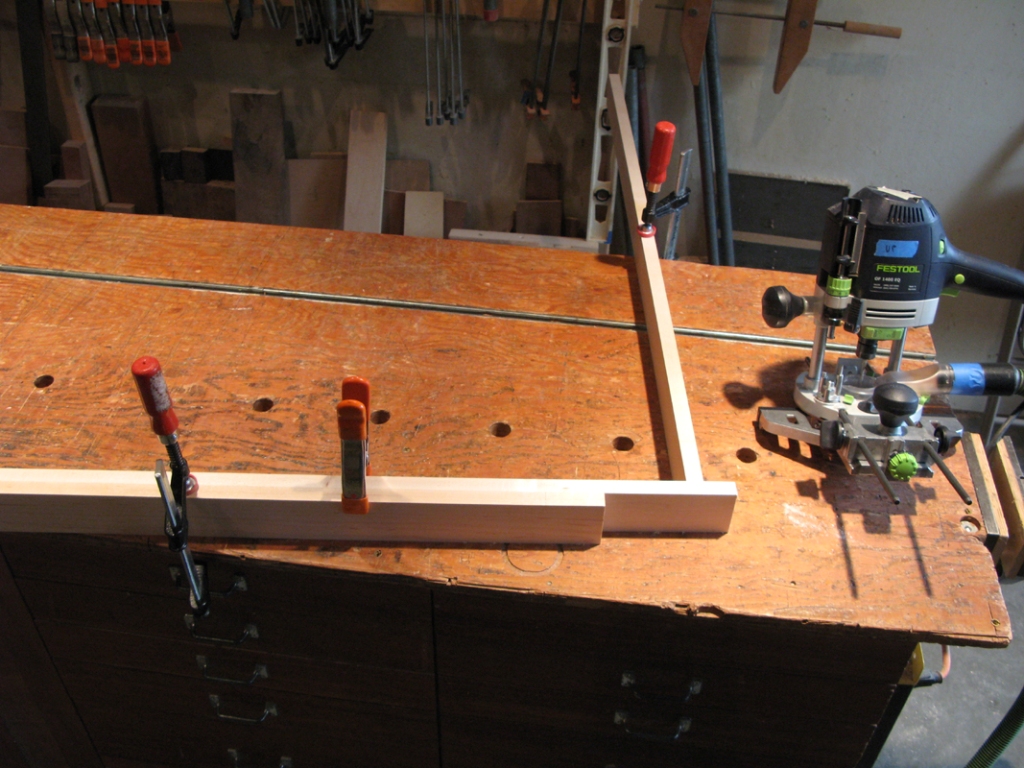 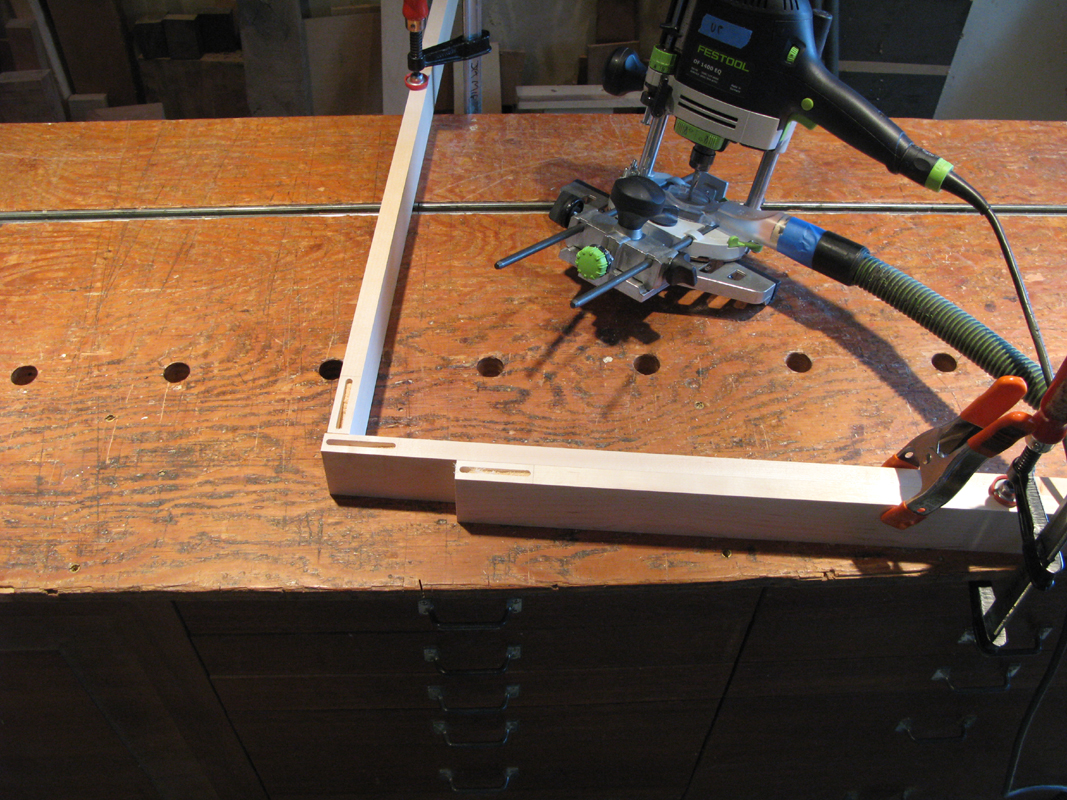 The stiles are 3/4 inch wide so he clamps two of them together on the bench top to provide a stable base for the router. He routs out the mortise to a bit less than the full width of the rail. He does not concern himself with the lack of contact between the ends of the mortise and the shoulders of the rail, as there is very little strength to be gotten from these end grain glue joints. 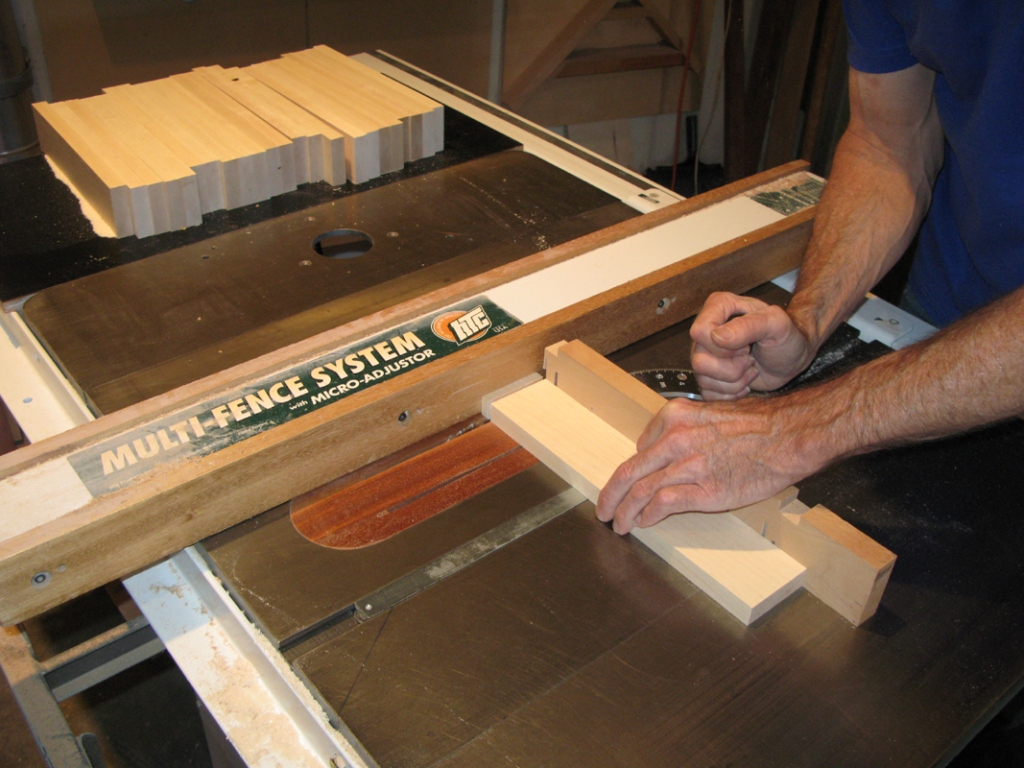 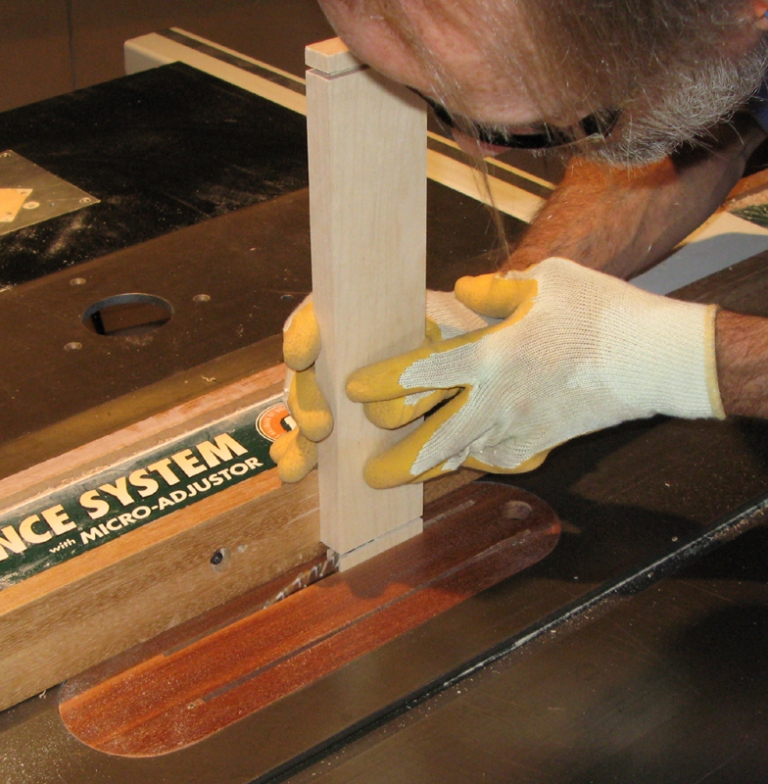 He first makes the cheek cuts on the tenons by setting the table saw rip fence to the tenon length. The height of the saw blade should be set to provide the proper tenon thickness, but can be even a little high as glue will fill in any gaps. For the cheek cuts, one can use a temporary tall fence to hold the rail vertically. Jamie holds the rail by hand and does not bother to clamp the rail to the fence except when the tenon is longer than about 3/4 inch. The saw blade height is set to a bit less than the tenon length as the kerf of the saw blade from the shoulder cuts has already cleared out some of the material and one needs to be very careful about cutting too deeply on the cheeks as this will leave a visible groove on the rail. Jamie has purchased a micro-adjusting rip fence for his saw that allows him to set the fence position to .001 inches so he can get precise tenon thicknesses with this method. A proper fit occurs when one needs to apply some hand pressure to push the tenon into the mortise (a few thousandths of an inch clearance). The rail should be positioned so that the offcut is on the outside of the blade and not trapped between the blade and the fence, a situation that could lead to kickback. The tenon ears are cut off with either a chisel or a bandsaw. He applies glue only to the walls of the mortise and not to the tenon to reduce squeezeout.

You can see more of Jamie's work at his website: jamiebuxton.com 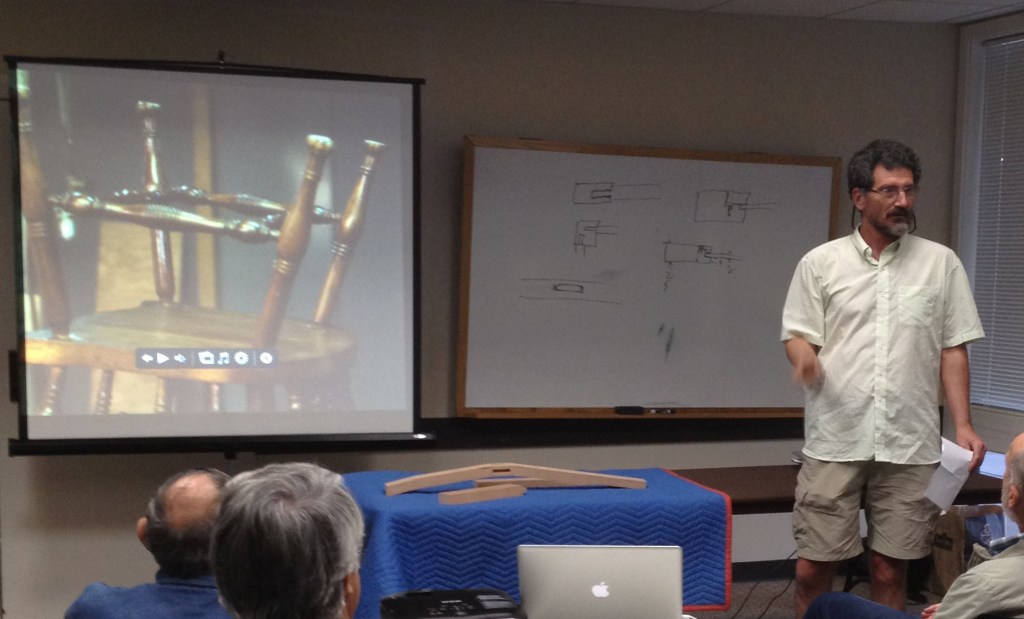 The next speaker was John McCormack whose subject was Chair Joinery.

John talked about the specific challenges he faced on specific projects that he has done including repairs and replacements of failed components on existing furniture. For example, in the case of a Windsor chair he often needs to make a special diameter spade bit to re-bore the leg mortises in the seat.

He then talked about the repair of a Klysmos chair, which is a Greek revival style based on designs from Mediterranean archaeology. The original construction used dowels for joinery but John would have preferred mortise and tenon joints.

He then described being consulted on 50 restaurant chairs which had failed due to poor glue joints by the maker, who was wondering why they were failing

The next project was the repair of a Georgian English revival chair with broken tenons. He had to cut off the broken seat side rail and replace it with a bridle joint.

The final project he described was his famous pencil chair. He had to use beefed up tenons because the chair has no stretchers.

You can see more of John's work at his website at: johnpmccormack.com 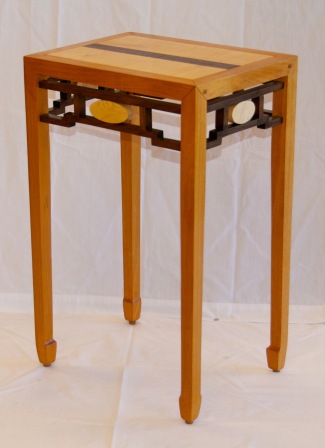 The final speaker was Frank Ramsay who described his adventures trying to implement some of the Chinese mortise and tenon joints he learned from Yeung Chan's talks. These joints look from the outside like mitered edges, but inside the joint are intersecting mortises and tenons.

Frank uses a hollow chisel mortiser for most of this work with judicious use of hand chisels and handsaws for final cleanup. One restriction is he has to work with the limitation of sizes of the hollow mortice chisels. Smallest is 1/4 in.

In the August 2012 edition of Fine Woodworking there is a Master Class article on the 3-way miter joint by Andrew Hunter where he hollows out the gaps for the stile of the joint using a spiral router bit on a router table. This is much more precise and produces a much neater looking joint than the hollow mortice chisels but the method takes longer than the hollow mortice chisels approach as you can only take shallow cuts with the router bit so need several passes.

All the joints he described were intended for use on tables rather than chairs.

You can see more of Frank's work you at his website at: frankramsaywoodworking.com