Table saw safety is in the news again. Many of the woodworking papers have reported that Das Williams, a California assemblyman, has introduced a new law that would require all new table saws to have "active injury mitigation technology" or "flesh-detecting technology" by January 15 2015.

I use a SawStop. I thought long and hard before committing to it as I did not want to buy a big table saw and then start thinking it is safe and leading me to becoming careless. Fortunately the noise of the saw tends to keep one on one's guard plus, as an electronics engineer, I can be skeptical about the reliability of technology. As my work has developed over the last 5 years, I am now working on many small pieces of wood with tight joints and blind cuts. This requires my hand to be a lot closer to the blade than the "3 inch" rule (or is it 7 inches?) At this time it would feel far too dangerous to be working the way I do on a regular table saw.

For the record I have only fired off the cartridge twice but never by touching it with my hand. First time was when I tried to saw through the back metal bar on a Kreg Miter jig that I had just swung to 90 degree for a quick trim cut without thinking through the consequences. The second time was when I made a cut deeper than I had planned on my vertical angled jig and sawed through one of the retaining bolts. In both instances there was a big bang and an expensive new blade and cartridge to buy.

But I do understand the industries and many woodworkers' objections to the legislature forcing this level of safety on them.

I am sure the SawStop technology is so well protected by patents that it will be impossible for others to implement the same functionality without obtaining a license agreement. Implementing "active injury mitigation technology" could double or more the cost of the low-end basic table saws and construction type table saws.

For much of the time construction and cabinetry work can be done safely with the normal protective blade guards on the saws. This work does not need the eyeball close to the blade like some of the more advanced furniture making tasks. Most times when you read of accidents on table saws the operator is working without the blade guard in place or without the splitter or kickback fingers on.

There is also the question of personal freedom. Table saws are not to my knowledge mentioned in the Constitution so common sense should be able to prevail - but that may be ask.

Do not forget about our Hands-on Hand-Planning Workshop being held at the Palo Alto High School Workshop on Saturday April 7th. With 4 great instructors:- Neal White, Harold Patterson, Don Naples and Yeung Chan - there will be plenty of 1-on-1 time for everybody.

For more details go to: bayareawoodworkers.org/Handplan_Workshop_April12.html

The first order of business was to ask new members and guests to introduce themselves.

Robert Blye has been a woodworker for 25 years and currently does a lot of turning.

Another new member had recently completed building a summer cabin and is now working on roots of redwood to make lamps. He asked if members knew where he could find more roots. Tom Gaston suggested that he could find square roots on a slide rule.

Dan Goodman filled us in on the plans for the "Rebuilding Together Peninsula" weekend. The project to rebuild some outside stairs and landing at a house in Daly City will be conducted in three phases: April 14 is demolition, April 21 in concrete work, and April 28 is the day to rebuild. Members are asked to sign up and most participation is needed on April 28.

Per Madsen described plans for the Hand Plane Seminar to be held at Palo Alto High School on April 7. There is space for 24 participants and interested members should sign up on the high school web site.

Per continued with a synopsis of upcoming BAWA meetings:

Eric McCrystal updated us on construction of the Facebook woodshop. It has now increased in size to 4000 square feet. They are using a laser to put inscriptions on turned wooden bowls.

Stan Booker has three beautiful walnut boards for the raffle and several new items for door prizes, including the mystery bag.

Frank Taylor has brought in a box of wood scraps that includes some turning blanks and small mahogany slabs.

John Hickman brought in a collection of old Fine Woodworking magazines salvaged from a neighbor who was cleaning out the garage. Members were encouraged to scavenge for themselves.

BAWA's own Yeung Chan Chair Design and a modern interpretation of a classic Chinese design.

Yeung's book, Classic Joints with Power Tools, is well known to the members of BAWA. Tonight he brought in 4 chairs, one a Chinese replica and three modern chairs he designed while employed as a designer/prototype maker at the Metropolitan Furniture Company. Yeung started at the company as a laborer and progressed to become its chief designer. Over the years he helped to develop several chairs, three of which he brought in tonight. When Yeung left the company, he was presented these chairs as a token of his contributions to the company. 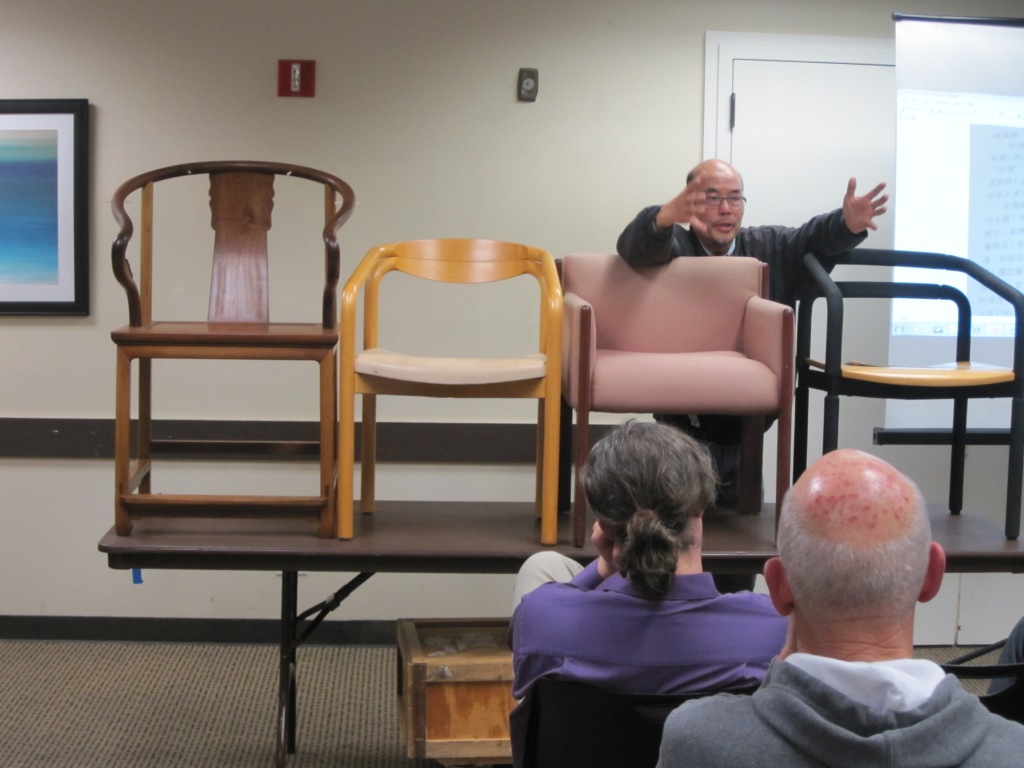 Chairs, Yeung explained, need to be strong, whether for sitting or throwing. At Metropolitan, prototype chairs were sent to a testing facility in North Carolina. The drop test involved dropping a 300-pound bag onto the seat of the chair 15 times. There was also a rigorous side impact test. A guiding design principle in contract furniture was to not make the chair too comfortable, after all you don't want people sleeping in chairs.

But let's look at the four chairs Yeung brought to BAWA tonight.

The Ming Dynasty replica was made by Yeung and has 37 pieces that must be assembled in just the right sequence. The first chair, Yeung made by hand, but this chair was the second and was made using power tools and techniques described in Yeung's book. Christie's Auction House in NYC sold an original chair of this design in 1996 for $230,000. Yeung thought of bidding for it, but the choice was easy: house or chair. So he decided to make one instead. 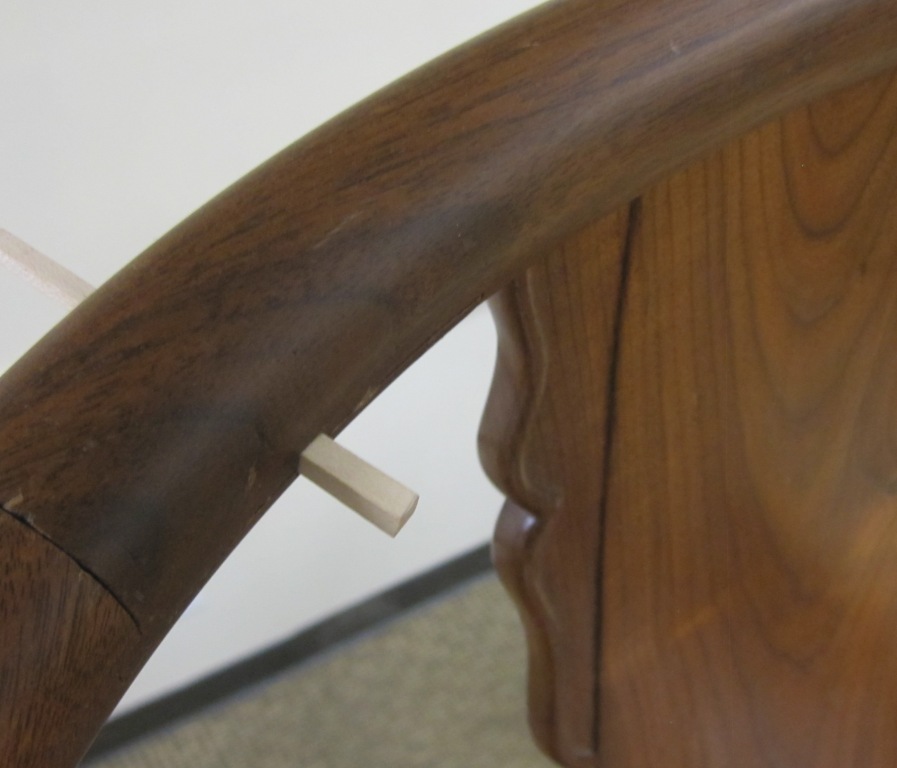 One of the four keys to the Ming chair

The Modern Chair has cloth fabric on a plywood seat and the legs are laminated plywood that has been rounded. The challenge was to figure out how to manufacture the legs and back rails economically. That is where the Danes come in. Metropolitan had Yeung make the prototype out of solid wood, then, it was shipped to Denmark. The Danes had to figure out how to make it. Ingenious as they are, the Danes decided to laminated sheets of plywood in the shape of the legs and back, then to cut the leg strips from the larger sheet. This chair has only nine parts.

The Upholstered Chair has a total of 10 parts.

The Future Wood chair has a metal frame covered with foam and was made in 1984. The metal is powder coated, and the seat is molded plywood. In that year, it won first prize at the Industrial Design Furniture show in Chicago.

These were early chairs in Yeung's career. Now he has been working on a modern version of the traditional Chinese chair. He was given the challenge of making two chairs and a table for a traveling exhibit and given only 2 1/2 months to accomplish the task.

First, he made a prototype chair from poplar. Satisfied that he had most of the details worked out, Yeung proceeded to the final chair in cherry. Not having a lathe, he constructed a turning box fixture to make the round tapered legs for the chair. The legs taper to a smaller diameter at either end and were turned from square 8/4 blanks. The ends were left square to facilitate orienting the leg when making the mortises. Yeung used a battery-powered drill to turn the leg within the fixture as he used his router to round the blanks. A battery- powered drill has variable speed control. The alternative, he explained, is to have your mother-in-law turn the spindle. A valuable woodworking tip.

At the joint where the leg meets the arm, Yeung decided to have each piece have a 45-degree joint so as to minimize the number of joints and glue lines. To make this elbow, he had to start with large stock and trim it down to form the elbow. He used a spokes shave to round the legs and arm pieces. The vertical back support piece was also carved with a spokes shave. It flows smoothly into the back top rail.

The seat is laminated cherry and is glued with epoxy. Epoxy, Yeung said, dries on the inside at the same rate as the outside, unlike conventional yellow wood glues that stay moist when not allowed to evaporate. The chair has a shellac finish.

This evening was another fascinating presentation from Yeung. Thank you. 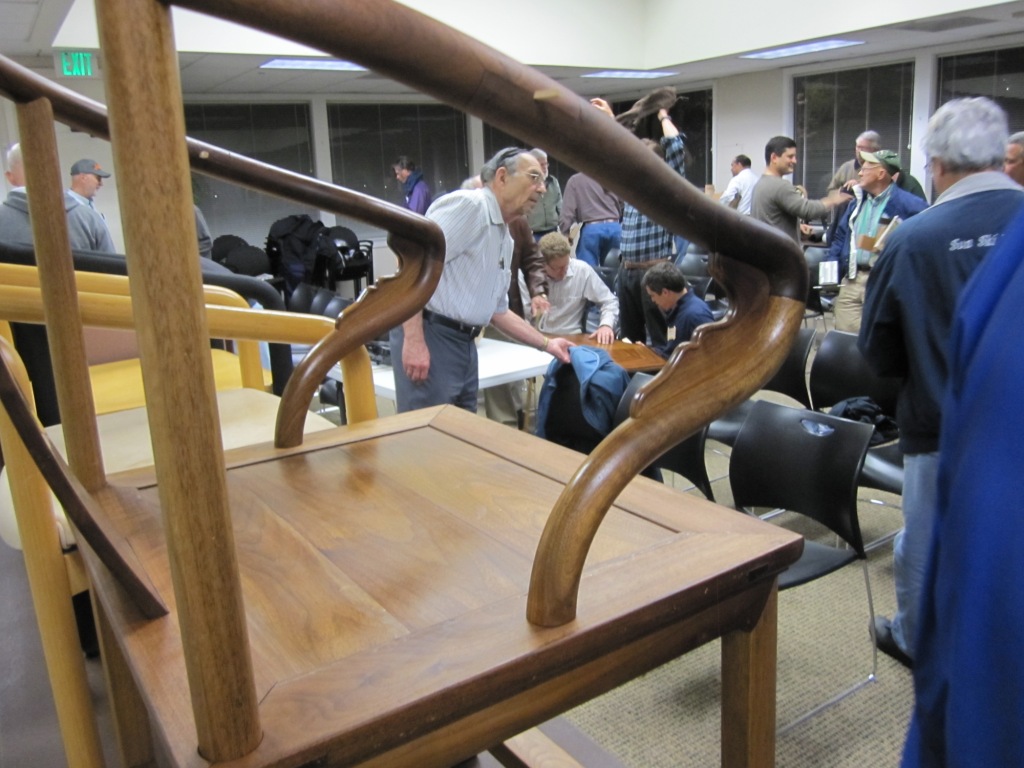 We took a 10 minute break and returned to Show and Tell. 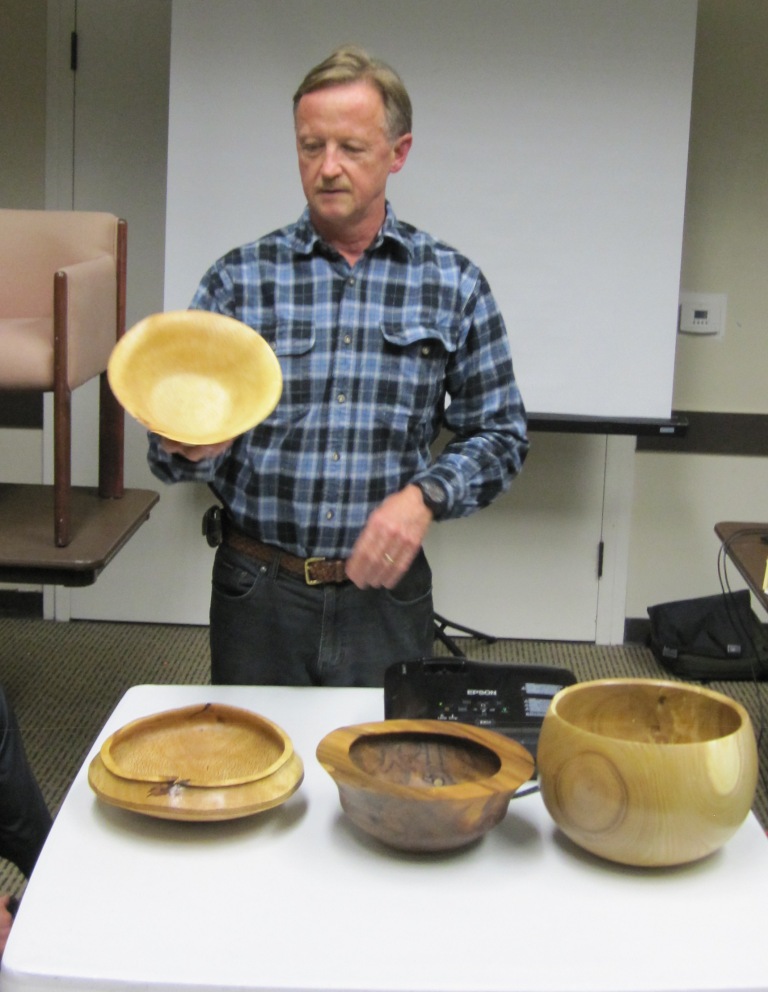 Tom Gaston: Turned wooden bowl showing what happens to the green, turned wood after it has dried. Surprise - several pieces were conspicuously out of round. 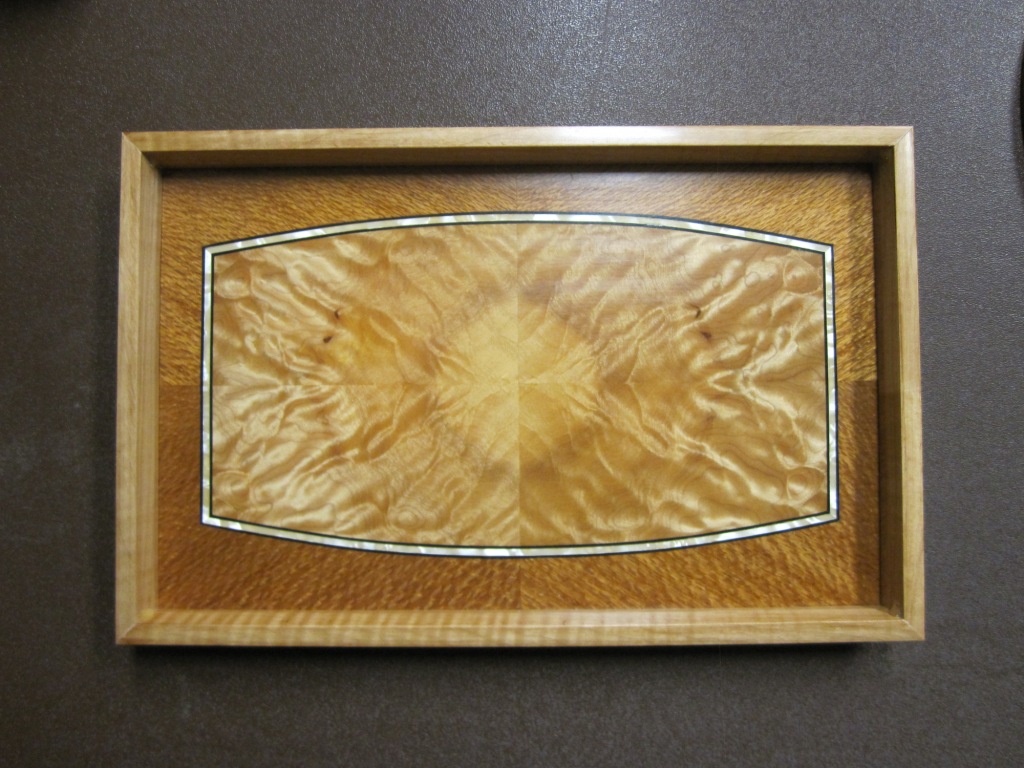 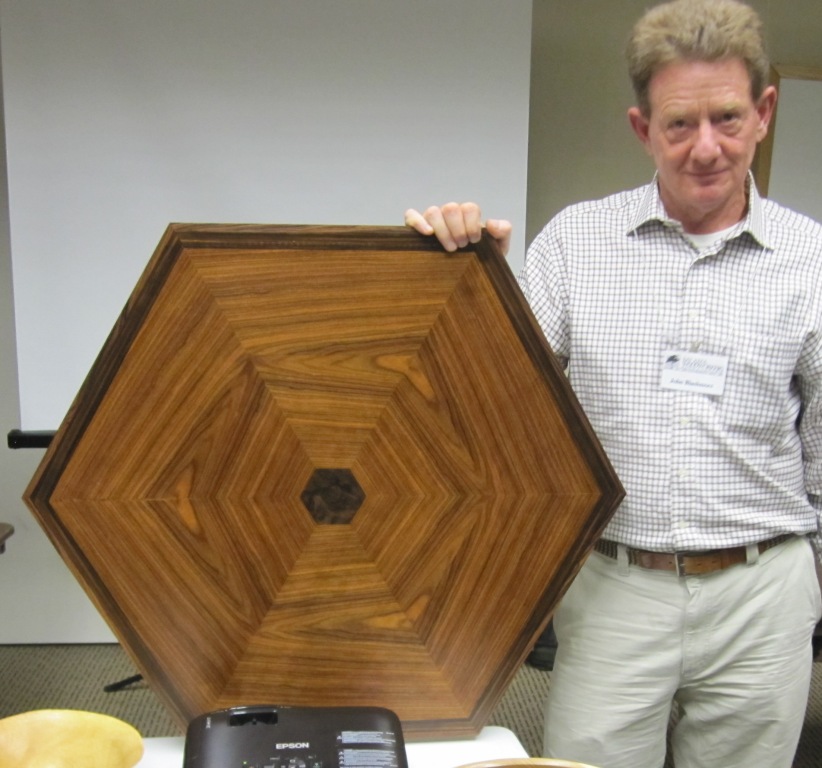 John Blackmore: A hexagonal tabletop made with a radial veneered pattern.

Neal White: A rare Stanley #239 plane that is not at all useful. He plans to take it to the rare tool auction in Spreckles in April. (sorry Neil the picture did not turn out very well - tool to old) 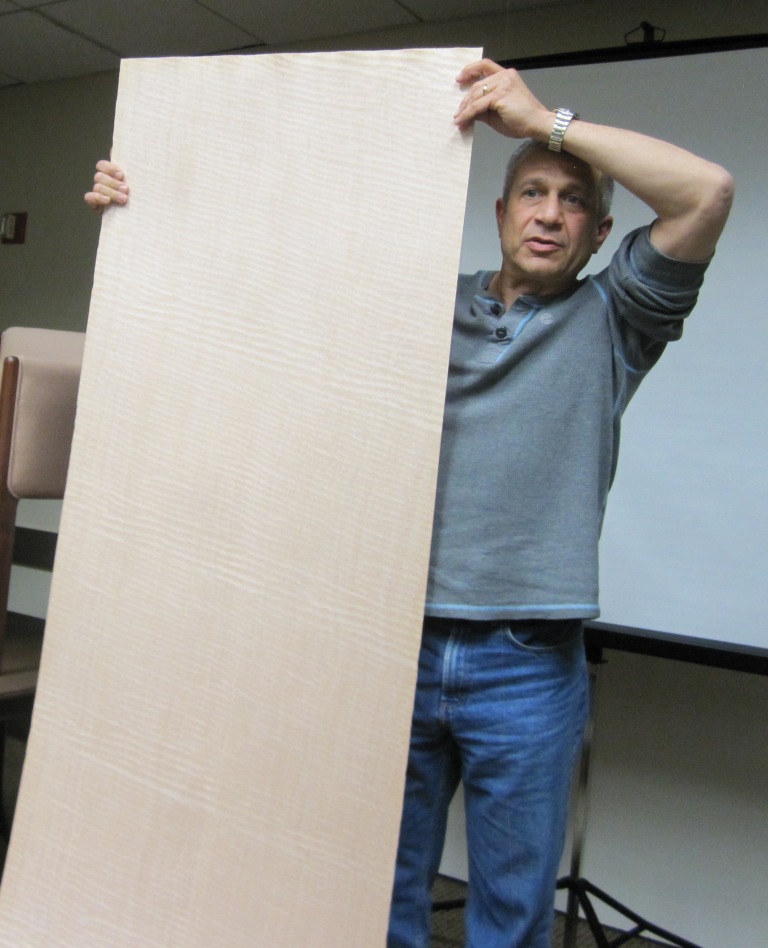 Robert Blye: A 2' x 8' roll of reconstituted tiger maple veneer. Robert wonders how it is made. Any guesses? It only cost $30